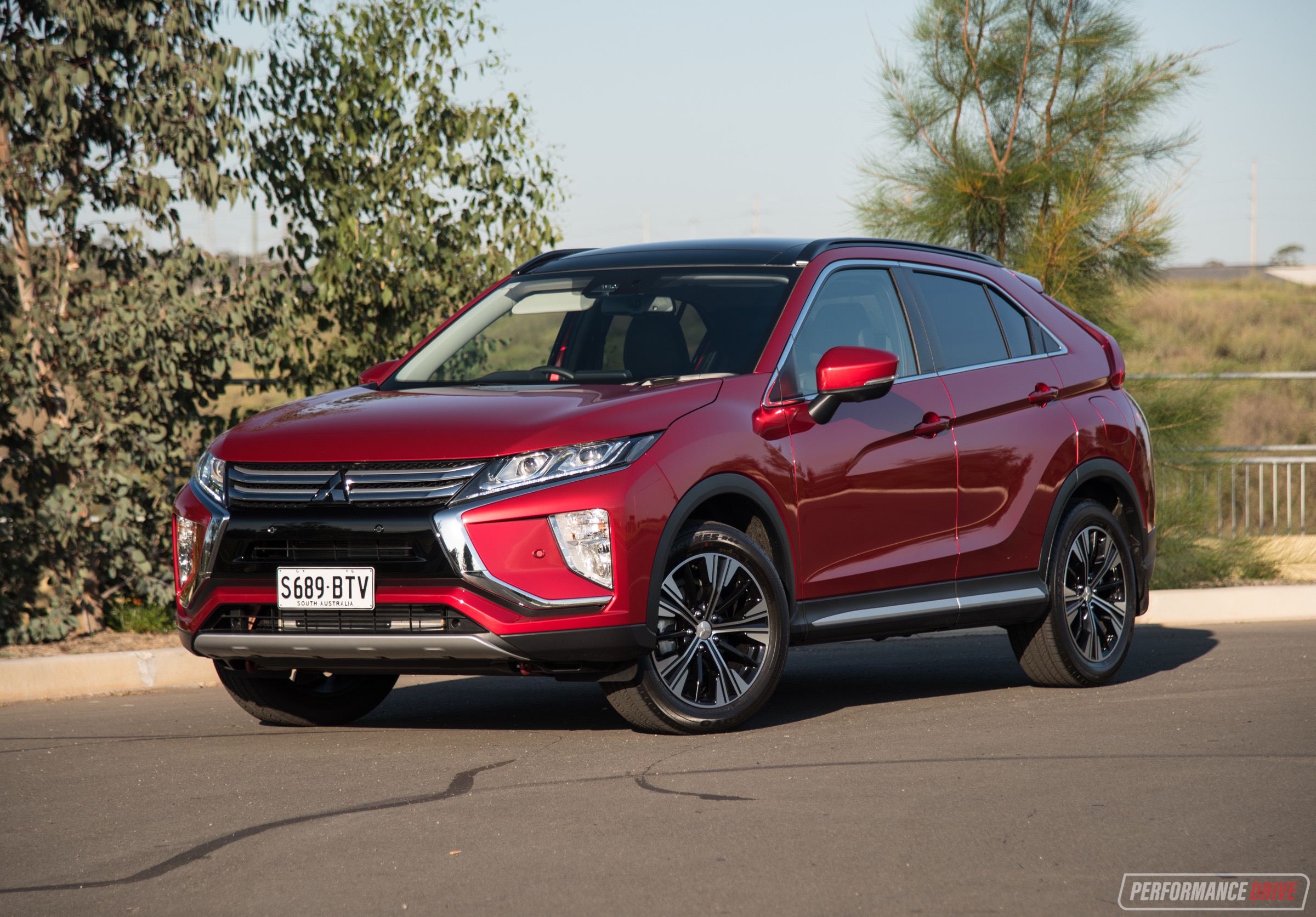 What’s one way to guarantee results in a race? You add more entrants to your team of course. And that’s what Mitsubishi has done with the new Eclipse Cross. It competes in the same race as the ASX, in the small under-$40k SUV segment. 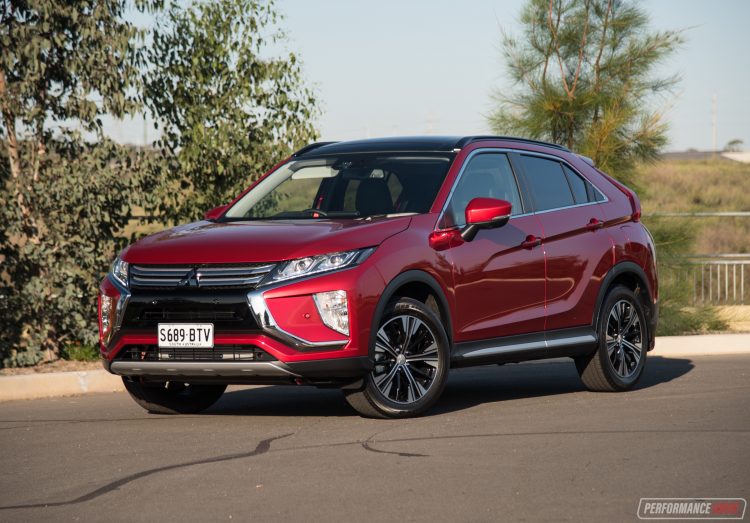 Think of the Eclipse Cross as the smart new SUV sibling in between the ASX and the Outlander. Both the ASX and Outlander haven’t had a major update in years and they are starting to wear a little thin in some areas. The Eclipse Cross reinvigorates the lineup by bringing in some all-new technologies for Mitsubishi, and a vibrant new turbo-petrol engine.

In Australia the Eclipse Cross comes in three variant levels; front-wheel drive LS and Exceed, and four-wheel drive Exceed. Here we’re testing the latter, which is priced from $38,500. At this price it is slightly more expensive than the flagship Mazda CX-3 Akari AWD petrol (from $35,490), and a smidge more expensive than the flagship ASX XLS diesel AWD (from $37,500, petrol XLS 2WD from $32,000). 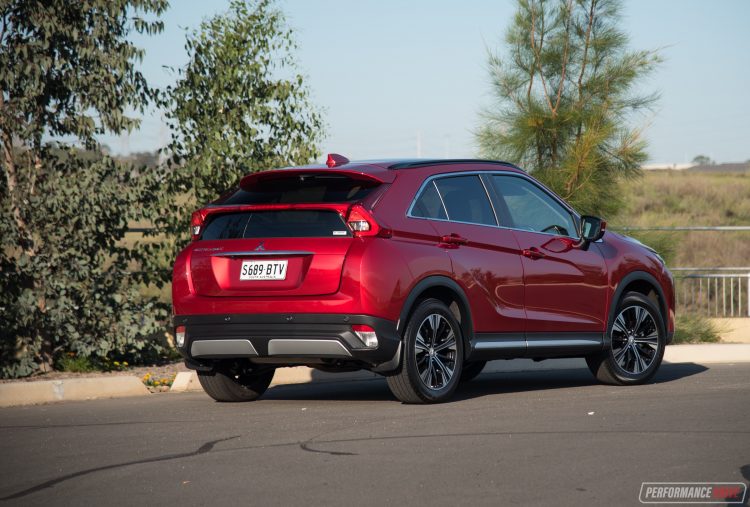 Mitsubishi interiors are usually pretty sparse and basic but very accommodating, with plenty of storage and passenger space. A similar thing could be said of the Eclipse Cross. However, the company has clearly applied a layer of premium in here, and not just because this is the top Exceed model. 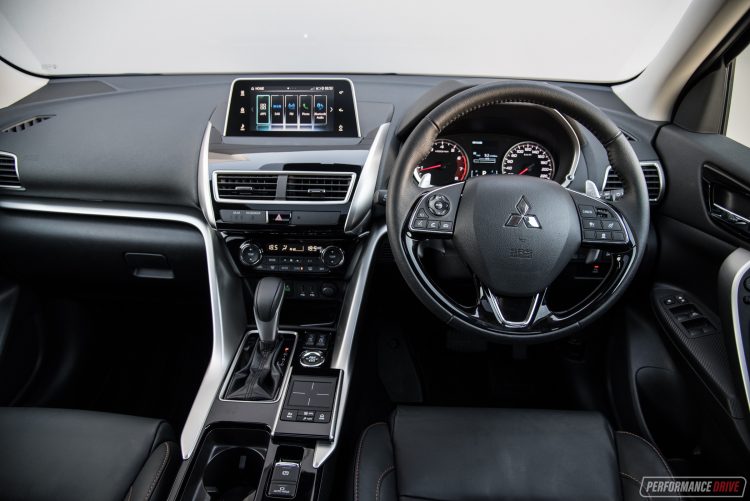 We notice a lot of the fixtures and buttons have a higher quality feel to them compared with in the ASX and Outlander. The dash and centre console design is also more elegant. Despite featuring a fashionable coupe-like swooping roofline, the Eclipse Cross does offer good headroom and legroom in the back. In our opinion, the rear seat is noticeably larger than the segment-favourite CX-3, and about the same as the ASX. In the top Exceed dual sunroofs go a long way to brightening up the overall decor, and the thick carpet mats make it feel like your lounge room floor.

External dimensions are 4405mm in length, 1805mm in width, and 1645mm in height. This makes it 40mm longer, 5mm narrower, and 45mm taller than the ASX. This should give you some idea of the interior space in comparison. With that swooping roof, cargo space is impacted. Official stats claim 341 litres is presented, expandable to 1122L with the rear seats folded down. Bespoke to the Eclipse Cross, Mitsubishi has introduced an unusual cross beam within the tailgate windscreen. We find this distracting when looking through the rear-view mirror, and for the so-called added design flair, it just doesn’t pay off in our opinion. 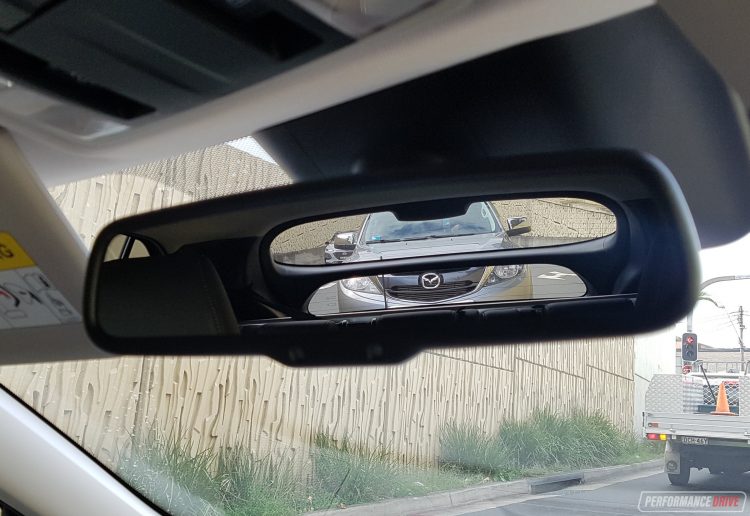 Comfort and refinement is what impresses most. The interior feels more special than any other Mitsubishi at this price point. A smart new touch-screen media interface also helps it leap ahead of its in-house peers. The 7.0-inch screen offers sharp graphics, nice colours and tones, and a Lexus-inspired touch pad controller on the centre console.

It’s a great attempt at moving control down onto the console. But, like with the Lexus touch pad, the system here is flawed. The cursor has this problem where it keeps flicking back to a main menu; it won’t remember what menu you were just in. This can be very annoying if you just want to browse radio stations. Every time you make a selection, your taken back to the main menu and you have to start over again. Apple CarPlay and Android Auto connectivity is standard and the only way to use any sort sat-nav as the interface doesn’t include it. As a bonus the screen doubles as a display for the 360-degree parking camera system, with front, side and rear cameras.

Speaking of safety, the Exceed comes with adaptive cruise control as standard, offering distance settings to adjust the gap between the next car. There’s also autonomous emergency braking, lane departure warning, blind-spot monitoring, rear cross-traffic alert, and an adjustable head-up display system. All of this adds to the Eclipse Cross’s standard five-star ANCAP safety rating across the board. 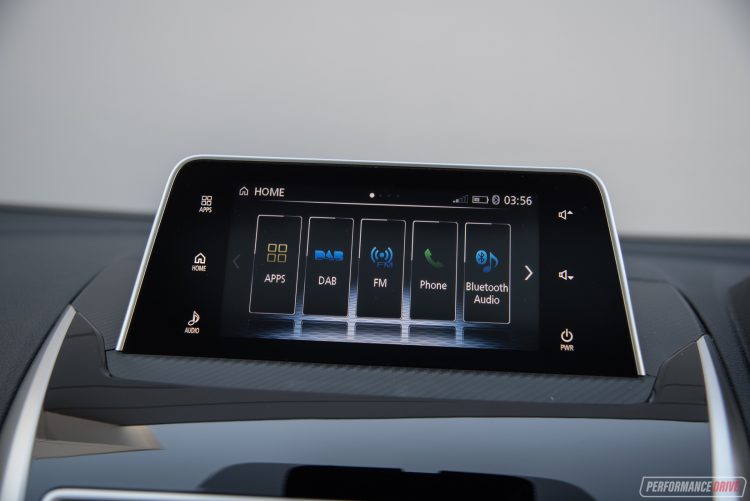 Under the bonnet, all Eclipse Cross models (in Australia) are propelled by a fresh 1.5-litre turbocharged petrol four-cylinder engine. It produces 110kW at a healthy 5500rpm, and 250Nm between 2000-3500rpm. It’s not the most powerful in the class but 250Nm of torque does bring a huge versatility advantage over the ASX petrol and its 197Nm torque output.

Matched up to the engine the CVT auto acts like a bit of a boost-builder. The engine revs are held at around 2500rpm to provide strong torque and turbo surge for most of your needs. Although 1.5 litres is small, the turbocharger and the CVT try to bring down fuel economy figures. On paper this all-wheel drive version consumes 7.7L/100km, and in the real world we experienced around 8.0L/100km. These figures aren’t especially enticing compared with some of the rivals, but they aren’t bad. 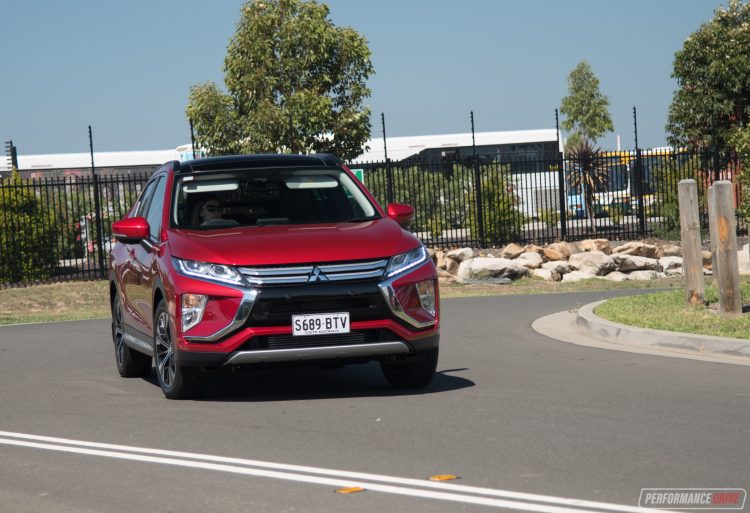 Performance from the engine is decent. We clocked 0-100km/h in 9.29 seconds, which is about average for a flagship petrol SUV of this class. The fact that it’s able to match rivals that use a larger engine is a testament to the 1.5’s tractability. It gets on with the job of hauling the 1518kg Eclipse Cross just fine.

Around corners there is evident body roll and lean, with almost sloppy-feeling suspension presenting a nice ride but low body control. We didn’t undertake serious off-road testing, but the handling, and especially the ride, feels more at home on the dirt. A relatively long suspension travel from the MacPherson strut front and advanced multi-link rear is more than capable of soaking up big bumps, and on the highway this translates to a very smooth ride. If you’re spending more time driving up and down mountain roads, we’d suggest the Mazda CX-3 is the more nimble handler of the bunch. But if you plan on doing some light off-roading, we’d have more confidence in the Eclipse Cross than just about anything else in this specific class.

Mitsubishi has extensive off-road expertise and some of this does trickle down here. On the centre console you’ll notice the very Japanese-sounding ‘Super All-Wheel Control’ button, which offers three driving modes; auto, snow, and gravel. Each mode alters the all-wheel drive system’s torque distribution and adjusts the throttle sensitivity and stability control to provide the optimum progress for the given terrain. 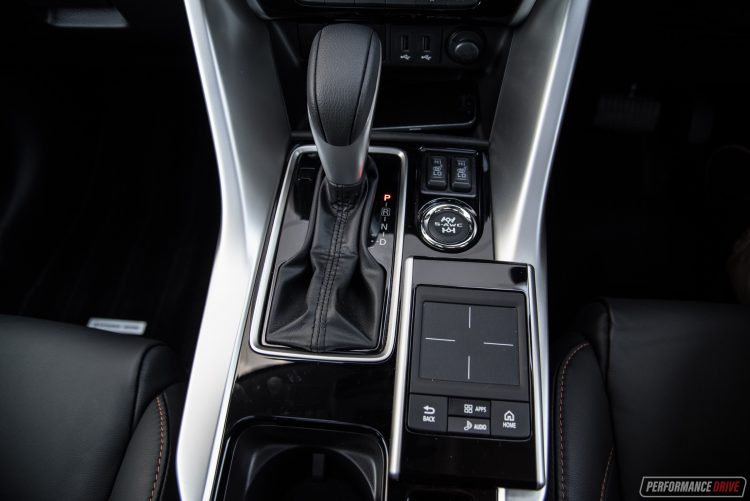 Mitsubishi’s current SUVs are a bit basic and hollow in comparison to some of the more modern rivals, which is fine if you simply want a dependable and tried and trusted, easy-to-drive vehicle. With the new Eclipse Cross though, the drive quality and refinement is noticeably higher, and tech levels are really boosted. All of this should help it succeed in this tough segment.

If you’re after a small SUV filled with heaps of the most wanted technology and safety, good interior space, and actual off-road ability (a rare thing is this class), the Eclipse Cross is a new player that deserves inclusion on your car-buying short list. Its standard five-year/100,000km warranty should also be noted.