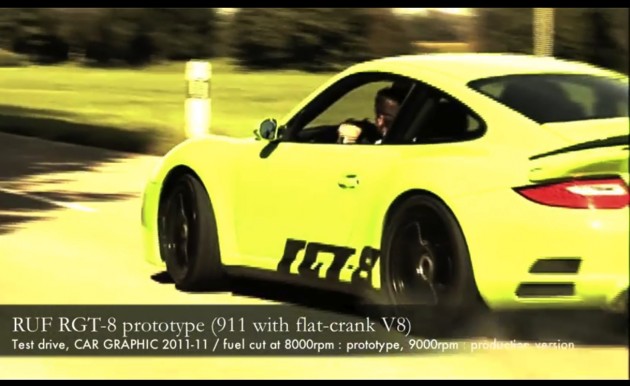 Ruf Automobile is responsible for some very special, and perhaps the most thorough examples of Porsche 911 tuning. The company is a manufacturer in its own right, so it doesn’t only fix up customer cars, although it can, it has a showroom of production cars too.

One of the latest of which that will join the lineup in the near future is the Ruf RGT-8. It features a 4.5-litre V8 engine developing 404kW of power at a screaming 8500rpm, and 500Nm available at 5400rpm.

The engine features a 180° flat-plane crank, which helps to allow for a 9000rpm redline. The engine also features dry-sump lubrication, twin throttle bodies and an interesting no-belt air-conditioning pump that is driven directly from the engine.

On the outside, the Ruf RGT-8 comes with bespoke bodywork crafted from inside Ruf, based on the Porsche 911. It comprises of a carbon fibre engine cover and rear spoiler, as well as lightweight aluminium panels.

Click play on the video below for some stunning sounds as Ruf test driver Stefan Roser (the man behind the famously awesome Ruf Yellowbird Nurburgring videos) demonstrates the Ruf RGT-8’s capabilities.

Production of the Ruf RGT-8 will commence in 2012.