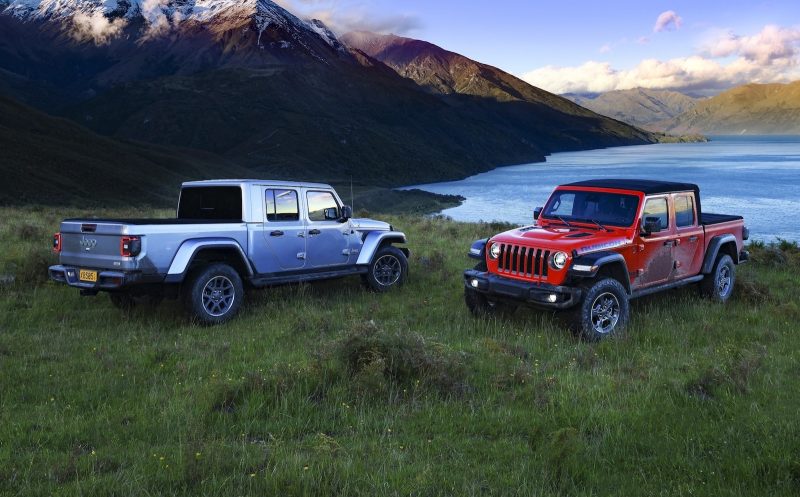 As if the ute market isn’t already competitive enough, Jeep Australia has just thrown its rugged and rather interesting 2020 Jeep Gladiator into the mix. It arrives this week following its initial introduction in March. As reported in March, Jeep Australia is offering three variants of the new Gladiator; the Overland, Rubicon, and a special Launch Edition available for a limited time only (100 units). All three take the form of a dual-cab body design with a hard-top roof, and showcase the iconic Wrangler front end and off-road underpinnings.

Power comes from the 3.6-litre Pentastar V6 petrol engine in all three models. It produces 209kW and 347Nm, making it one of the most powerful dual-cab utes on the market this side of those big American pickup trucks from RAM and Chevrolet. The engine is matched to an eight-speed auto and selectable four-wheel drive system. Stepping up the Rubicon adds a more comprehensive off-road pack, consisting of Tru-Lok locking differentials for the front and rear, a front stabiliser bar disconnect function to maximise wheel travel, as well as Fox dampers, 32-inch BFGoodrich tyres (255/75) on 17-inch alloy wheels, and a special front camera system to view the terrain ahead.

Interestingly, the Wrangler’s trademark removable roof and doors do carry over to the Gladiator. This is very unique to the ute segment and could be a great point of difference. All models also come with Jeep’s impressive 8.4-inch Uconnect touch-screen media interface, offering Android Auto and Apple CarPlay, as well as a kicking nine-speaker Alpine stereo. The local arm essentially says the new model is being very well received by Australia consumers, with plenty of potential buyers already submitting their interest. Given the dual-cab ute market is responsible for the most popular vehicle models on sale at the moment, outright, the Gladiator is expected to do quite well. Speaking about its arrival, Kevin Flynn, Jeep Australia managing director, said:

“Thousands have indicated their interest in the Jeep Gladiator over the past few months and our dealers are excited to add such a unique vehicle to their product lineup. The Gladiator builds on Jeep’s iconic character and renowned merits, creating the one-of-a-kind convertible truck with unparalleled 4×4 credentials.”

Customers can head into their local Jeep showroom now to check it out and arrange a test drive. Prices start from $75,450. See below for the full price list (excludes on-road costs), and head over to our initial report linked at the top for a complete rundown of the highlights.