There have been more than a few surprises and standouts at 2011 Pebble Beach week this year, with Edsel Bryant Ford’s 1934 Model 40 Special Speedster certainly being one of them. 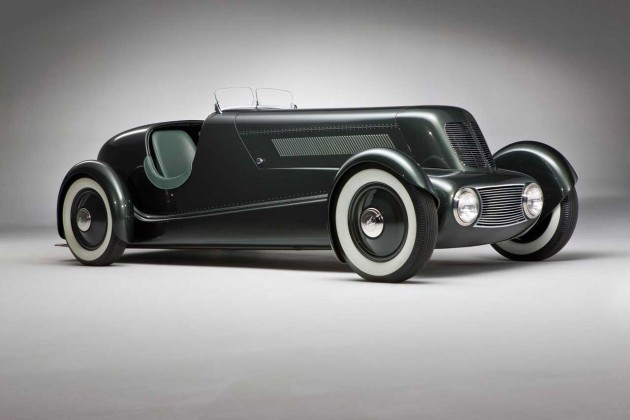 Its stunning looks are thanks to a very long concurs restoration.

While normally we don’t publish the actual press release, below you can read how this unique car came about in full detail. 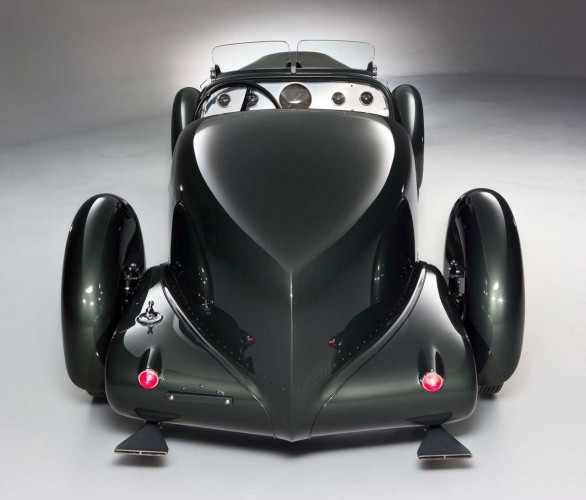 Discoveries during restoration confirm originality of design and engineering
PEBBLE BEACH, Calif., Aug. 19, 2011 – It has grace, style and a 77-year history shrouded in mystery that has intrigued automotive collectors, enthusiasts and writers worldwide. Edsel Ford’s restored 1934 Model 40 Special Speedster was unveiled today by Lincoln and the Edsel & Eleanor Ford House at The Lodge, Pebble Beach in Monterey County, Calif. It will appear again on Sunday August 21, at the Pebble Beach Concours d’Elegance. Restored to its timeless elegance, Edsel’s personal roadster shared its story of a decades-long journey.

The Speedster’s extensive restoration by award-winning RM Auto Restoration in Ontario, Canada, revealed the stunning, custom made “one off” as it originally looked in 1940 after its final redesign by Edsel and designer E. T. Gregorie. The revelations uncovered during a year-long restoration have resolved many long-held assumptions about the illustrious vehicle’s journey over time. But more than a story of restoration, the vehicle provides a glimpse into the early years of Edsel Ford’s design and automotive styling as President of Ford Motor Company and its luxury Lincoln line.

The Speedster celebrates Edsel’s eye for design that began when as a small boy he would take pen to paper to sketch cars as well as everyday objects. “My grandfather was an early believer that everyday objects – including automobiles – could be seen as works of art,” said Edsel Ford II, who unveiled the Speedster. “While he wasn’t a designer in the traditional sense, his eye for styling and influence was apparent as he initiated and built the design department at Ford Motor Company.”

After Edsel’s death in 1943, the Speedster crisscrossed the U.S. making limited appearances, then it disappeared – some feared it had been destroyed. It was last seen when it was photographed in Hollywood in the 1950s after which it was purchased by a U.S. Navy sailor in Florida for $603 in 1958. It didn’t appear again until Bill Warner displayed it at the Amelia Island Concours d’Elegance in 1999. In 2008 it was sold to a Texas car collector for $1.76 million, then, following the collector’s untimely death in 2010, the Speedster returned to Edsel’s home, now operated as an historic site called the Edsel & Eleanor Ford House. Over the years, alterations were made to its grille, engine, paint and interior – it is these alterations that have been reversed by RM Auto Restoration to take the famous car back to the 1940 design and engine.

The Model 40 Special Speedster
Its rich history began in 1932 after Edsel returned from a trip to Europe. He asked Ford’s chief designer, E.T. “Bob” Gregorie to design and supervise the construction of a personal sports car similar to those he’d see “on the continent.”

The first design reportedly disappointed Edsel because it wasn’t lower and racier. But Gregorie, who was adept at turning Edsel’s visions into tangible designs, went to work on a more dramatic, streamlined design. This “continental” roadster may have started with a stock 1934 Ford (aka Model 40) frame, but its subsequent chassis was radically altered. The Model 40 Special Speedster was unlike anything Ford Motor Company had built up to that time.

At 113 inches, the Speedster’s wheelbase is approximately the same as the standard 112-inch wheelbase of a 1934 Ford roadster. Yet, it appears longer and lower. This illusion was achieved by modifying and lowering the car’s chassis, positioning the cockpit toward the rear of the car and extending the tail section.

It was believed that the Speedster’s fenders were modified Trimotor Aircraft “wheel pants,” but Ford’s aircraft fabricators undoubtedly fashioned them from scratch. The custom-designed front cycle wings were mounted so they turned with the car’s Kelsey-Hayes wire wheels. The all-aluminum bodywork followed the best aircraft practice – light and very strong.

The Speedster was painted Pearl Essence Gunmetal Dark; the interior upholstered in complementary gray leather. The flat, engine-tuned instrument panel incorporated period Lincoln instruments. The 2,100-pound Speedster was powered by a stock 75-bhp, Ford Model 40 flathead, with straight exhausts that were enclosed by the bodywork with only the tips protruding.

The Speedster had low-mounted faired-in headlights, an enclosed radiator with a concealed cap, a starter button on the instrument panel, minimal chrome trim and no running boards – features that didn’t appear on production Fords for years.

The Speedster’s shapely hood had louvered side panels that subtly matched the angle of the radiator grille and the windscreen. A pair of narrow vee-ed grilles with a single row of louvers (vents) running the length of each side of the hood limited the flow of cooling air. The Speedster had a tendency to overheat.

Two period photographs of the car show two different louver treatments. One shows a single row of side louvers; the other features two rows of louvers, one atop the other. It’s reasonable to suspect that because of overheating issues, the hood was modified between the times these photos were taken.

Reportedly, a winter freeze in 1939-40 cracked the engine block; a new 239-cid, 100-bhp 09A Mercury V-8 was installed. This would have been the most powerful version of the Ford flathead V-8 available at the time.

By 1939, Gregorie had designed wider twin grilles for the Lincoln-Zephyr, so it followed that he would take the same approach for the Speedster. He redesigned the Speedster’s front end by shortening the upper grilles and fabricating a wide, horizontal grille for improved cooling. The new design, which required extensive modifications to the hood, was likely completed in 1940. The instrument panel may have been updated at the same time with a 160-mph racing type speedometer and matching Stewart-Warner accessory instruments.

“The Model 40 Special Speedster was only enjoyed by Edsel for a few short years before his death in 1943, but its journey was just beginning,” said Ford House President Kathleen Mullins. “Ford House is proud to give life to Edsel’s original vision for a unique, continental roadster.”

The Model 40 Special Speedster has moved through almost eight decades of owners and modifications and has returned to its early design elegance. After Pebble Beach, its journey will continue, ultimately returning home . . . to Ford House.

To follow the Speedster’s travels, and view the restoration process, visit www.fordhouse.org. For video footage of the Speedster, go to media.lincoln.com.