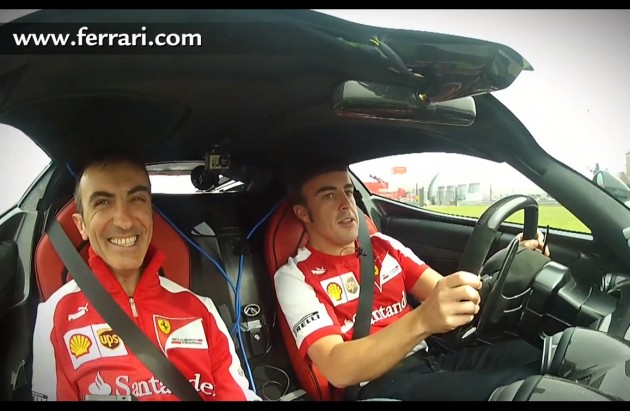 LaFerrari was only just unveiled a month ago at the Geneva Motor Show. It’s Ferrari first ever hybrid vehicle, and the most powerful Ferrari production car ever made.

It features an extremely low-profile body, as you would expect, with a complex new 6.3-litre V12 hybrid powertrain. The power unit produces a combined output of 708kW.

Alonso not only gets to take the exotic road cars for a test drive, in this case, he was enlisted to help set up the handling, the driving position and the arrangement and layout of the in-car controls in LaFerrari. Alonso recently said,

“I am always happy to spend a few days in Maranello. Apart from working on the car and being in close contact with the team, sometimes I’m able to see some of the production departments which are the heart of the company. This time I met up with people who are never in the limelight, but they have an incredible love for their work.

“I think that everyone, at least once in their life, should be able to experience a visit to these places and meet these people. It was nice to shake their hands and see the passion in their eyes. It gives me even more motivation and makes me even prouder to be part of the Ferrari family.”

It looks like Alonso and one of the Ferrari engineers were going for a lap time during the drive. It’s unknown what time they achieved.

Click play below to take a look. It’s good to know a glorious V12 soundtrack is still there.