MINI has unveiled the new MINI Roadster, a convertible version of the recently released MINI Coupe. The new MINI Roadster features a manual-operated flip down roof and is shorter, lower and slimmer than the MINI Cooper Cabriolet. 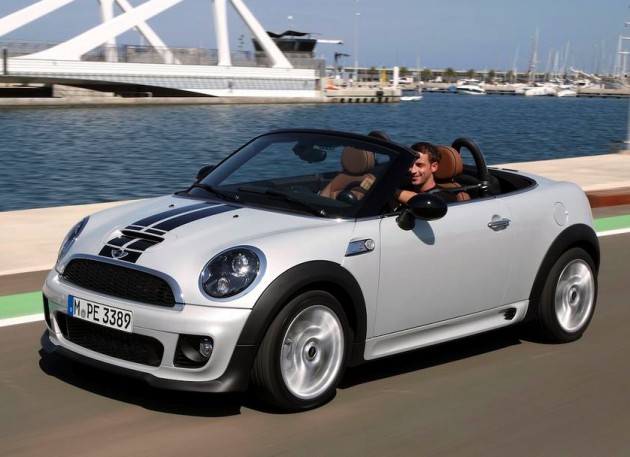 The 2012 MINI Roadster is part of MINI’s aim to expand model options for the popular small car, following the release of the MINI Clubman and MINI Countryman. This new version is set to be the smallest and most agile drop-top MINI to be produced.

The entry-level Cooper features a 1.6-litre four-cylinder engine developing 90kW of power and 160Nm of torque. MINI says the variant is capable of doing 0-100km/h in 9.2 seconds, while top speed is rated at 200km/h.

Next up is the fuel-efficient diesel version, the Cooper SD Roadster. It features a 2.0-litre TwinPower turbocharged four-cylinder engine producing 105kW of power and 345Nm of torque. Acceleration from 0-100km/h is handled in 8.2 seconds while the top speed is 213km/h.

Sharing the same sporty performance theme as the MINI Cooper S is the MINI Cooper S Roadster. It comes with a 1.6-litre TwinPower turbocharged four-cylinder engine developing 135kW of power and a maximum (overboost) of 260Nm of torque. Acceleration from 0-100km/h is managed in 7.0 seconds while top speed is 227km/h.

Lastly, the highest performance version to join the new lineup is the MINI John Cooper Works Roadster. This features a 1.6-litre TwinPower turbocharged four-cylinder engine developing 155kW of power and 260Nm of torque. It’ll sprint from 0-100km/h in 6.5 seconds and go on to a top speed of 237km/h.

All new MINI Roadster models will come with Dynamic Stability Control and electronic speed sensitive steering, as well as an MP3/iPod compatible in-car entertainment system and an electronic rear spoiler.

For added safety the drop-top will come with a stainless steel roll bar. Optional features include an Electronic Differential Lock with Dynamic Traction Control, as well as a Harman Kardon stereo system. The Roadster is also open to plenty of other personalisation ugrades.

The new 2012 MINI Roadster is promising to be one of the most agile little open-top sports cars on the market. MINI Australia is yet to finalise official pricing for the new model, however, deliveries are expected to take place before the middle of next year.