Chevrolet has been spotted testing prototype versions of the next-gen 2014 Chevrolet Corvette C7 muscle car. The latest scoops were picked up in New Mexico, US, over the weekend. 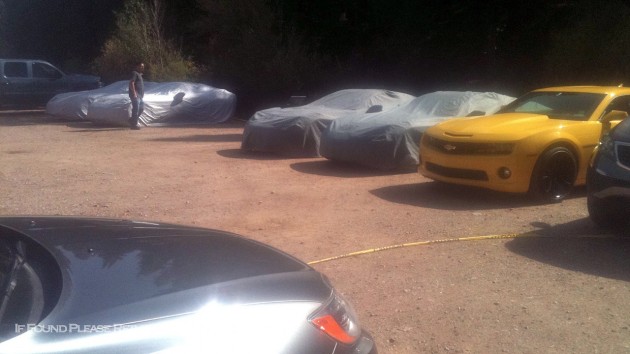 A number of images have surfaced online, first sent in to US enthusiast website Jalopnik, as well as a small YouTube clip capturing a test vehicle driving along. Little is revealed in either the video or the images, with the prototypes wrapped up in plenty of black disguise.

Interestingly, the prototypes are accompanied by what appears to be a collection of Chevrolet Camaro ZL1s – the most powerful Camaro on sale – and current-generation Corvettes. Chevrolet is likely testing the new prototypes and gauging their performance against its current crop.

Specific engine packages to be offered with the new model are still yet to be revealed. Various reports speculate a downsized V8 lineup, with the possibility of a twin-turbo 5.5-litre V8 or 6.0-litre V8.

With technology such as cylinder-deactivation, the new model is expected to be a lot more fuel efficient, as well as being more powerful.

Click play on the video below for a very quick look, and check out the images below courtesy of Jalopnik.