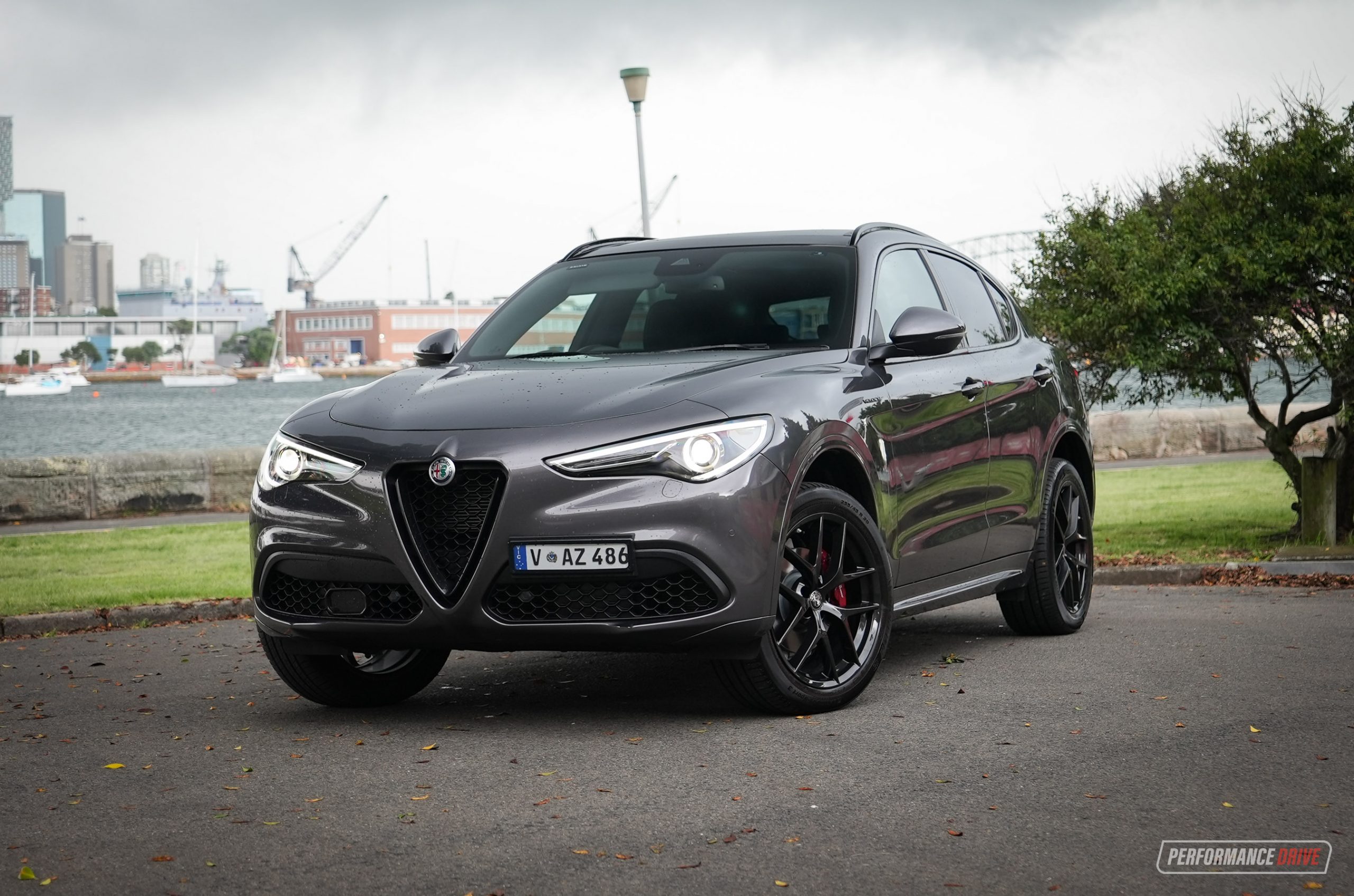 In 2019, Alfa Romeo entered the world of SUVs for the first time with the Stelvio. It made perfect sense. A brand with the soul of performance and style translated into what we all now flock to; an SUV. The new Veloce variant aims to amplify those traits. 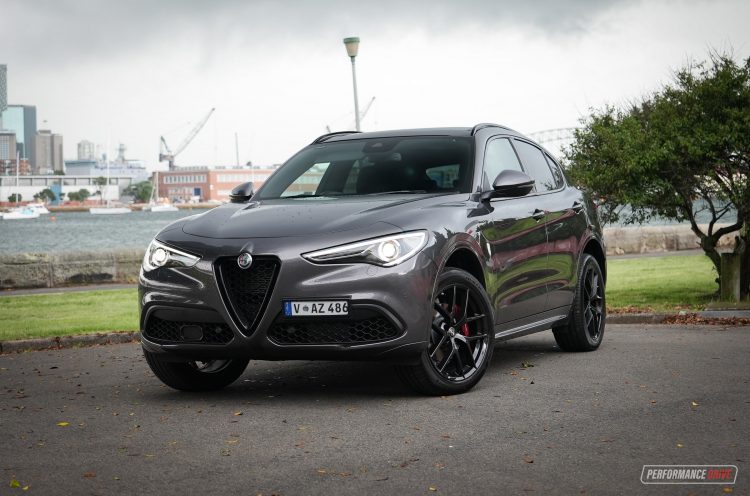 The Stelvio appeals to Alfa enthusiasts as well as prospective buyers considering a luxury mid-sized SUV like the Jaguar F-PACE and Genesis GV70, along with the common German rivals. Prices start from $64,950 for the nameless base model Stelvio, which is $950 less than when it was first released in 2019. Working up the rank is the Stelvio Sport, then the Veloce (replacing the previous Ti), and at the top stands the spectacular Quadrifoglio.

There are three engine specs through the lineup; a 2.0-litre turbo-petrol producing 148kW and 330Nm in the base model and the Sport, a 206kW and 400Nm 2.0-litre turbo-petrol for the Veloce, and a mind-blowing 375kW and 600Nm from a 2.9-litre twin-turbo V6 petrol engine in the case of the Quadrifoglio. The initial 2.1-litre turbo-diesel has since been deleted. All models use an eight-speed automatic transmission and feature on-demand all-wheel drive. 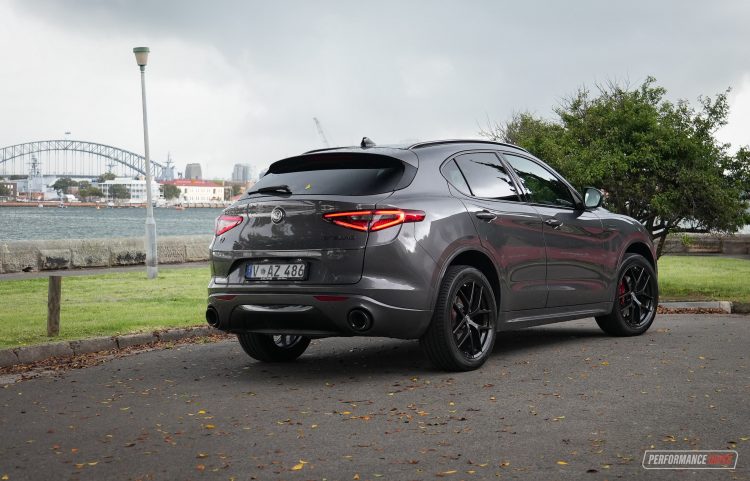 The Stelvio is based on the same platform as the Alfa Romeo Giulia sedan, and is built in Frosinone, Italy. It adopts a design language Alfa is famous for, with the most recognisable stance at the front, as it strikes a pose with its trademark triangular grille. Frowning headlights give it an aggressive and sporty touch. They are embellished by striking LED lights in their outer surrounds. The back exhibits a pouncing look with horizontal flowing taillights. From top to bottom, it expresses an athletic, elegant and fresh appeal.

Going for the Veloce, which was introduced last year, means you get a range of black or dark grey highlights. The small wheel arch extensions are colour-matched with the body, unlike the black plastic strips on the old Ti, while the 20-inch alloy wheels are painted in gunmetal grey for a trendier look than the previous silver items (same wheel design). 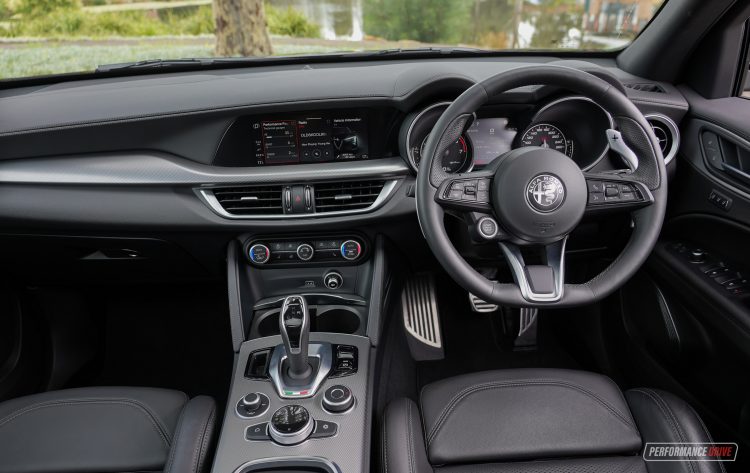 Inside, it’s all about flair and flamboyance. This is a stunning interior in terms of stying. It looks very exciting as well, with no boring shapes like in many of the rivals. Most of the decor is grey though which doesn’t exactly scream and shout. A new 8.8-inch touch-screen was introduced with an update in 2020, offering Android Auto and Apple CarPlay, while the Veloce uses a 10-speaker sound system as standard or an optional 14-speaker unit.

Surprisingly, the 10-speaker sound system in the Veloce variant sounds better than the optional 14-speaker Harman Kardon sound system we tested in the Ti in 2019. This one offers more bass and clarity. The now bigger 8.8-inch infotainment screen is easily navigated by a wheel on the centre console, and air-conditioning settings are separate dials on the dash for quick access. 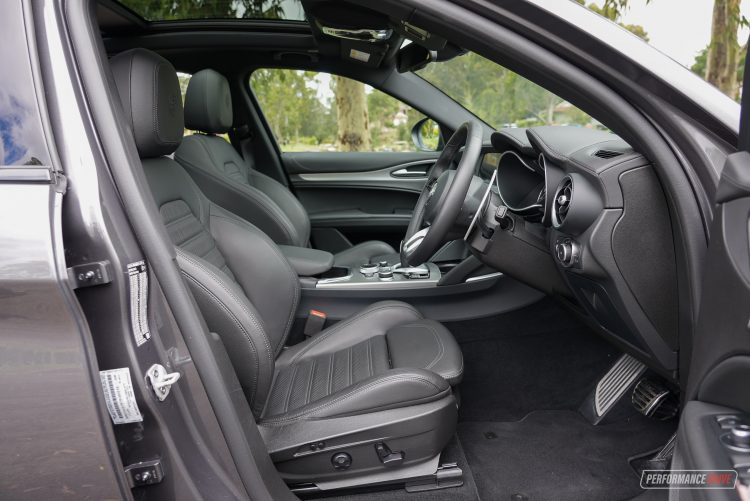 We love these bucket seats in the front, and the low-set driving position. Even the steering wheel looks good, like it comes from a serious sports car. Most of the cabin is nicely illuminated and puddle lights on every door look elegant at night and are helpful. To keep the driving experience as ‘real’ as possible, there is no fully digital instrument cluster. You get two mechanical dials and a screen in the middle.

Rear seat space is ok for this class, but those rather nice-looking climate vents do protrude outward, sapping some legroom from the middle seat passenger. Practicality is ensured via charging ports and a flip-down arm rest, with cup holders, and smallish bottle holders in the doors. 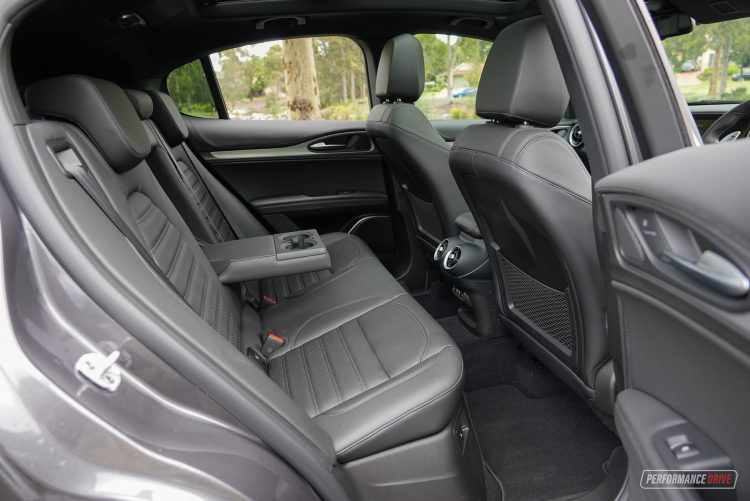 Boot space doesn’t quite hit the 550-litre segment benchmark set by the German rivals, but it is a flat and clear loading space. Folding down the rear seats, which can be done conveniently from tabs in the boot wall, opens up 1600 litres, meeting those rivals. Under the floor is probably the best-looking space-save spare wheel we’ve ever seen. Even painted in gloss black – no area is left alone when it comes to styling in an Alfa.

Alfa Romeo now offers a five-year, unlimited kilometre warranty on its new vehicles, and servicing is required every 12 months or 15,000km. Five years free roadside assistance is now part of the package as well. 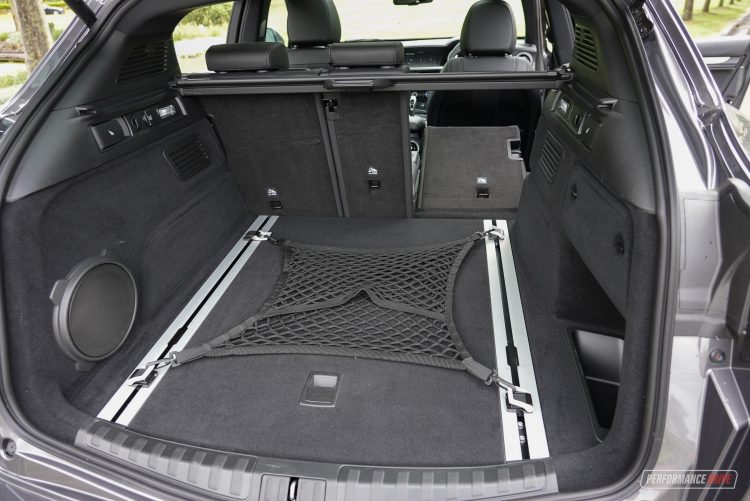 On the road, the Stelvio’s driving dynamics certainly live up to the brand’s reputation. It feels – and is – very agile, scooting and dancing lightly on its feet between turns. The fact that this variant only weighs 1619kg makes sense, because it does indeed feel like the lightest SUV in its class. Grip levels are also very high, clasping onto bends like it’s a little roadster.

The suspension is stiff, as it needs to be for a high-riding vehicle that also handles so well. But through corners it feels stable and exhibits minuscule body roll. Drivers can play around with three main driving modes (Dynamic, Neutral, All-weather), and the Veloce comes with adaptive dampers. Thanks to a separate suspension button, you can have it in the most aggressive Dynamic driving mode yet set the dampers to soft, which is best suited to Australia’s country roads.

We think the steering is very sports oriented, requiring little rotation to get the vehicle to shift its direction. It certainly makes it feel exhilarating to drive, but it also makes it feel nervous on the freeway. You need to constantly negotiate the steering wheel to keep it in your lane, which obviously becomes tiring on longer journeys. It’s best to stick to the back routes and enjoy the fun handling. 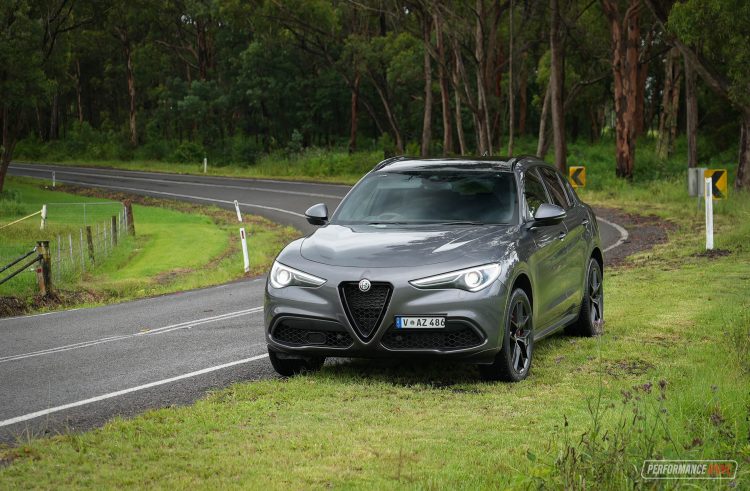 Progress provided by the 2.0-litre turbo engine is responsive and punchy. All 206kW kicks in at 5250rpm, which is fairly low for a petrol engine. But it isn’t afraid to rev right up to the limiter. A peak torque figure of 400Nm is impressive for an engine of this capacity too, including against some rivals. Add in that low weight figure and you have yourself a swift machine.

We timed 0-100km/h in 5.87 seconds, bettering our previous time of 6.16 seconds in the old Ti with the same engine. We’re can’t confidently explain what the difference is due to, but it’s most likely the weather conditions and possibly different fuel quality used at the time of testing.

Driving in regular mode exposes an irritating delay in throttle response, which in turn causes jerkiness. It is almost impossible to apply the right amount of throttle for the job. Selecting the Dynamic mode minimises this trait.

On the other end of the driving experience, braking can also be quite jerky as well. The brakes tend to dig in suddenly. But they do pull up the SUV confidently and quickly, stopping from 100-0km/h in a tested 35.74 metres. We’d like to see a little more tuning in the pedal feel for absolute refinement. 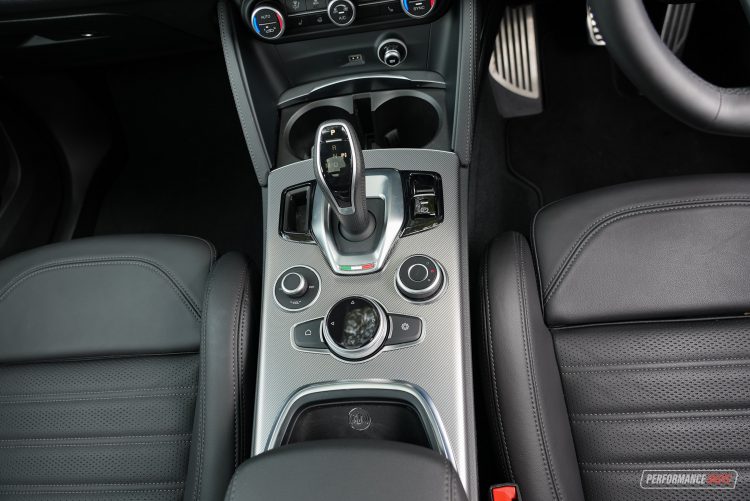 Fuel economy is stamped at 7L/100km on the official combined cycle. This does seem a bit far-fetched in our opinion. Through a tank of fuel and being easy on the throttle the closest we could get to was 8.6L/100km. Then driving in a more realistic fashion, we scored 9.5L/100km. Fortunately, the performance does make up for it but we just feel the official figure could be a bit misleading.

There are some other minor irritations we noticed during our test. Locking and unlocking the doors creates a piercingly loud beep. It’s as loud as an alarm, and bystanders might either think you’re stealing the car or being obnoxious by making them look at you in your flashy Alfa. The on-board driving range calculator also varied by more than 100km during 6km of driving in our test – overly sensitivity to your driving habits. And lastly, numerous times, the forward collision sensor turned off during light rain in our test.

Alfa Romeo’s first shot at an SUV has been stunningly executed with the Stelvio. It has still got the chic looks and performance Italy and Alfa are famous for. But drivers flock to SUVs because of their practicality. More handy storage areas and niggly little refinement improvements would get all the boxes ticked for us. But the core focus of the Stelvio Veloce is its stylish design, sharp handling, and punchy performance. It’s also quite good value compared with many of the Euro rivals with similar engine power.