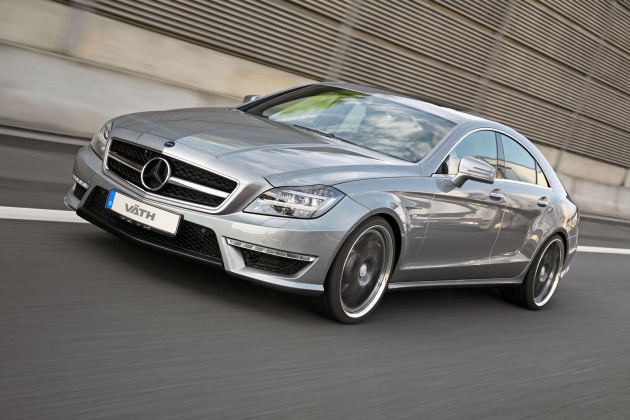 VATH extracts more power from the twin-turbo V8 unit by fitting a new intercooler and a new freer-flowing stainless steel exhaust system. The V63RS kit also comes with a recalibrated engine management system to provide smooth running and to make sure plenty of air and fuel is always pushed into the engine.

The term sledge hammer comes to mind with this new VATH CLS, as just under 500kW of power is more power than three Volkswagen Golf GTIs. VATH says the V63RS VATH Mercedes-Benz CLS 63 AMG is able to tear from 0-100km/h in 3.9 seconds – not a totally astonishing time, but it is a large luxury Merc with rear-wheel drive – and from 0-200km/h in 12.0 seconds. VATH also says the new package can reach a top speed of 325km/h.

To help handle all the power, VATH fits a lowered sports suspension kit so the VATH Mercedes-Benz CLS 63 hunkers down providing high-speed stability and a more agile handling characteristic. Matched to this is a set of speed-rated 20 x 9-inch front and 20 x 10.5-inch rear forged alloy wheels, wrapped in 265/30ZR20 and 305/25ZR20 tyres, respectively.

As for the styling, the VATH CLS 63 V63RS kit can come with a neat aerodynamics pack which includes a finned rear diffuser and a discreet boot lip spoiler, both in black, as well as a lower front spoiler and air intake section. Inside can also be tastefully matched, with a revised layout including carbon fibre trimmings, a new sports steering wheel and a 360km/h instrument cluster. And because it’s a top line Merc, it’s also fitted with loads of other luxurious goodies from factory.

For more information on this and other tuning packages, head over to the VATH website.