Ferrari has showcased the new carbon fibre chassis of the upcoming Ferrari Enzo ‘F70’ successor for the first time. The chassis is up to 20 per cent lighter in weight compared with the one used on the original Enzo, while also being 27 per cent stiffer. 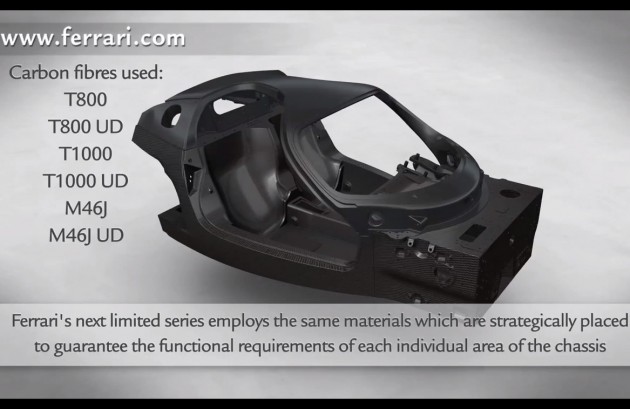 The chassis was first revealed at the 2012 Paris Motor Show in France, currently underway, while the company has also released an interesting video showcase outlining the new platform.

The chassis features an advanced integration of many fundamental aspects, such as the dash cross member, fuel tank protection, front suspension pick up points, and the layout for the seats and battery sections.

The chassis is also made up of various grades of carbon fibre, including unidirectional carbon, to ensure stiffness and rigidity. All this carbon fibre could mean the new Enzo will tip the scales at around 1100kg, allowing for an incredible power-to-weight ratio.

Other key highlights include ultra high strength carbon ladder structures in the sill areas, and the use of Kevlar under the body for protection.

As far as we know, power for the new hypercar will come from a V12 petrol engine and an electric KERS hybrid system. Overall power is expected to be around 686kW.

The new model is expected to be revealed some time later this year, before hitting the market in certain countries during the first half of 2013.