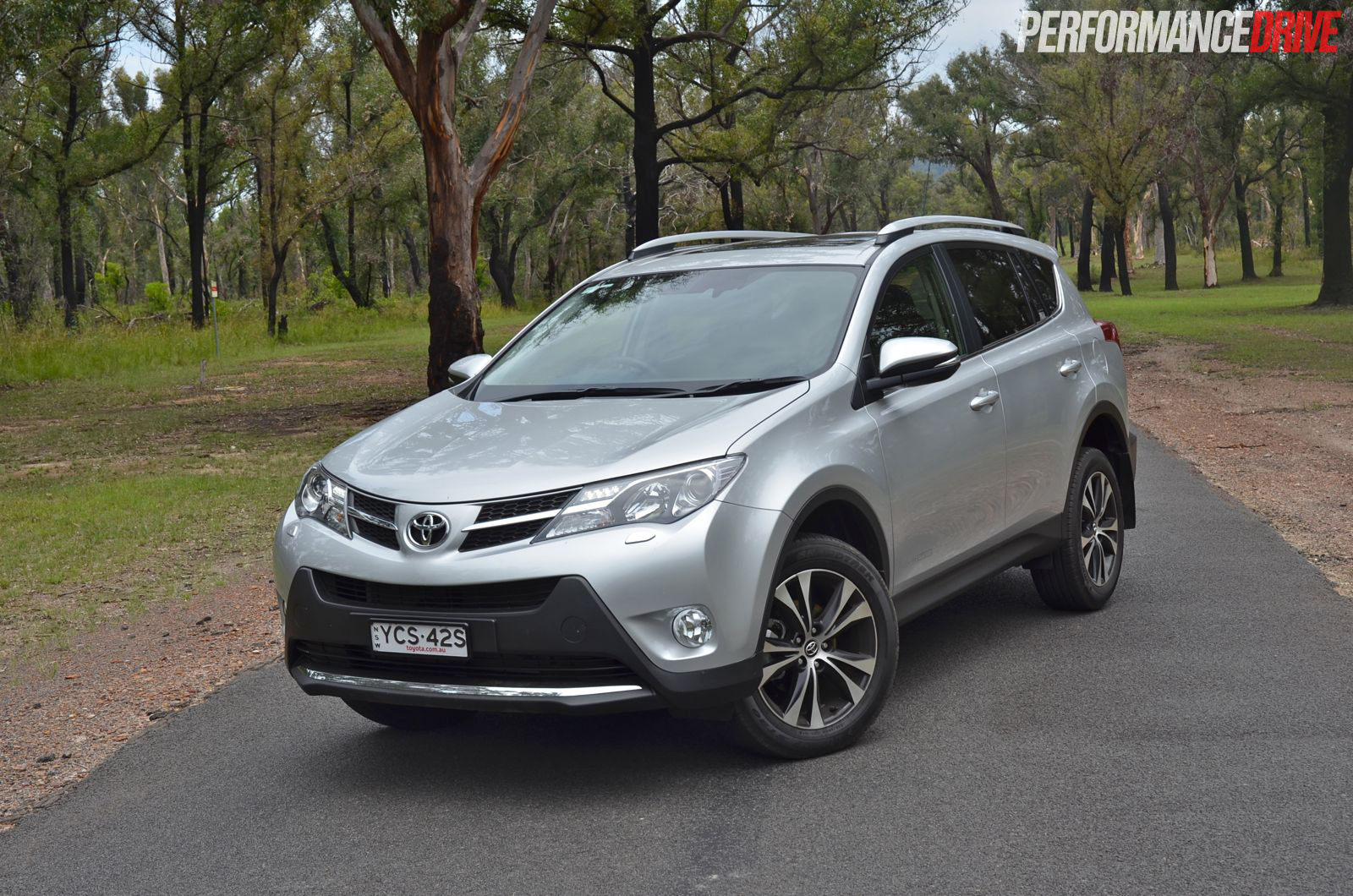 Sold in Australia for more than 20 years now, the Toyota RAV4 is somewhat of a household name in terms of people-friendly and likeable SUVs. Though there’s no camels in the advertising budget for the latest fourth-generation model, the 2015 Cruiser diesel posses the most amount of character we’ve seen from the popular SUV. 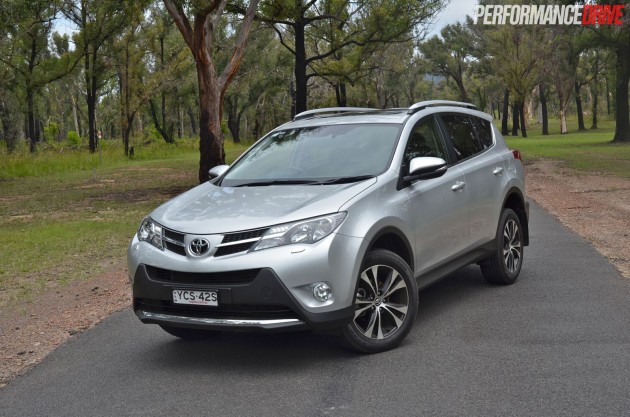 Starting from $27,490, the RAV4 range consists of the GX, GXL, and Cruiser. Starting the range in terms of available engine and transmission combinations is the GX, which comes with a 107kW/187Nm 2.0-litre petrol four-cylinder and a six-speed manual, driving only the front wheels.

Onwards from there buyers can option up for all-wheel drive, a six-speed automatic, a gutsier 132kW/233Nm 2.5-litre four-cylinder, and for the first time in a RAV4, a 110kW/340Nm 2.2-litre turbo-diesel four-cylinder. The diesel is available in all three variant levels. Here we’re testing the top-model RAV4 Cruiser, which starts from $44,990. Opting for the diesel engine adds $3500, making this a near-$50,000 vehicle. 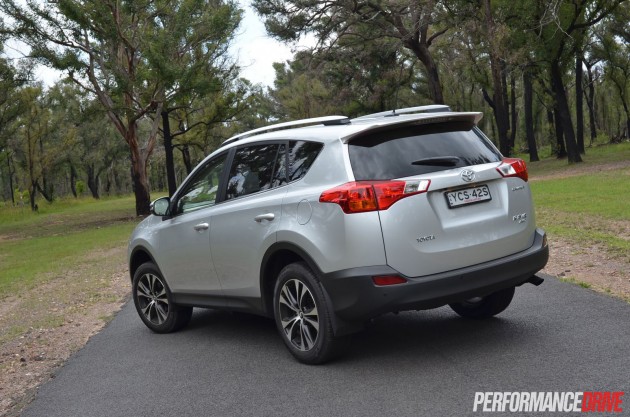 Naturally, the Cruiser comes with the most amount of standard kit of all RAV4s, including features such as partial leather seats, sat-nav, a power tailgate, heated front seats, an electric sunroof, an electric driver’s seat, and self-leveling headlights. The base model GX doesn’t go without though, with standard features such as auto-on headlights, Bluetooth, and cruise control, while the GXL adds alloy wheels, privacy glass, dual-zone air conditioning, USB input, and proximity keyless entry.

You can rest assured that the RAV4’s interior isn’t as boring as some Toyota SUVs from the past – including the previous RAV4 which had a monotone colour scheme and almost zero character. The design is mix of clever and modern, and uses a combination of stitched material, faux carbon fibre, and silver plastic trimmings to create a somewhat classy look. The dash design is also a little futuristic.

Cabin space up front is more than generous for the driver, however the funky design of the dash does restrict the passenger’s ability to sit comfortably if they’re rather tall (180cm and above). Climb into the rear seat and you’ll notice the floor is quite flat, allowing for easy access across the seat, with enough headroom and legroom to fit three large adults.

Neat features such as the automatic tailgate make life easy, while the retractable luggage blind will keep your personals from finding their way into the cabin should you hit a bumpy road. The rear cargo space is more than ample with the rear seats upright (577 litres), however it’ll become a large TV-swallowing 1778 litres with the optional full-size spare (or 1866 litres with the space saver) should you choose to kick the rear passengers out and fold down the seats. 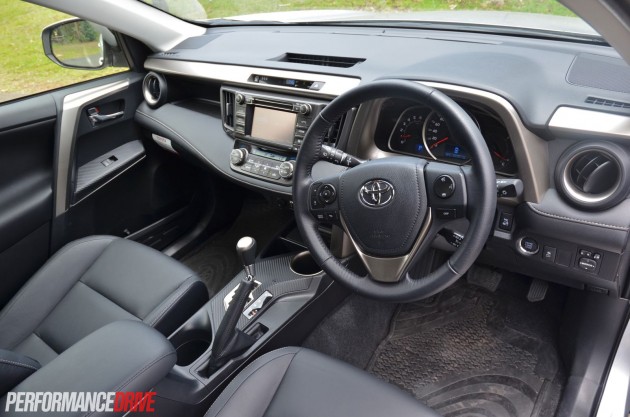 The RAV4 provides the driver with a entertaining drive. While the steering might not be the best in its class (the RAV4 now uses an electric steering system) in terms of feedback or feel, it works well with the suspension to maintain some fun-driving appeal. It’s an SUV that feels light on its feet, but at the same time it feels stable and sturdy.

The 2.2-litre turbo-diesel engine offers a nice amount of torque down low, with 340Nm from just 2000rpm, and it builds enough power to muscle through traffic or easily overtake vehicles on the freeway. There’s minimal turbo-lag, offering a smooth linear power curve from just about anywhere in the rev range. Official fuel consumption figures sit at 6.5L/100km, and we managed to score 6.9L/100km during a mix of city and highway driving – a lot of which the RAV’ was almost full of passengers and the usual carry-on luggage required for a trip.

One of the sweet points is the slick-shifting six-speed automatic. It works intuitively with the diesel motor to not only match the right gear for the amount of go you require, but it also smartly uses the available torque to keep things going in the name of fuel economy.

We found the RAV’s ride to be a little on the stiff side, but this translates to less body roll which gives the RAV4 a sportier feel than some of its competition. It doesn’t bobble around like some SUVs do over rough roads, but it can send a jolt through the cabin if you hit a rather decent pot hole or object. Under brakes the RAV4 feels competent and composed. If an emergency were to arise, the brakes are more than up to the job.

If you’re a keen boating or caravan enthusiast and have your sights set on a diesel RAV4, the maximum braked towing capacity of 1000kg might turn you away (unbraked is 750kg). For some reason the diesel model is restricted, while its petrol brother can tow a maximum of 1500kg. We’re not sure why this is the case. If 1000kg isn’t enough and you’re dead-keen on a RAV4, you’ll have to go for the 2.5-litre petrol model. It offers less torque (233Nm) and uses more fuel (official average 8.5L/100km).

Off road, the RAV4 Cruiser makes good use of decent ground clearance and a differential lock to clamber over rough terrain. It’s quite obvious this SUV isn’t made for the tough stuff and will scrub over big mounds if you forget it’s not a LandCruiser. This is a capable and fun SUV for lightly rough terrain though, or for a trip to the beach. While the tyres feature a road-focused tread pattern, traction is quite good on the slippery stuff, such as on gravel and loose dirt. Additionally, Toyota has done a good job with fine-tuning the stability and traction control to understand when the car is on and off the bitumen. 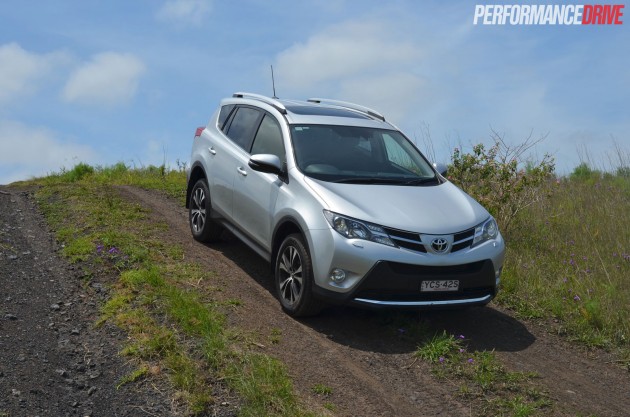 In terms of summing up the RAV4 Cruiser diesel, Toyota has brought us the best version of this popular model yet. This new model looks funkier, offers a neat, modern-looking interior, and comes with a quality variety of engine and transmission combinations. The RAV4’s greatest asset is its build quality and structural sturdiness. It feels like it will last a lifetime, and it is very user friendly.

We could nitpick and say that we think the Ford Kuga is a better looking car, or that the Mazda CX-5 offers a nicer interior, but the RAV4 does everything very well, including doubling as a genuine weekend light off-road explorer. At $48,490, it is worth keeping in mind that only one of its competitors is more expensive, the 2015 Jeep Cherokee Limited diesel, at $49,000. 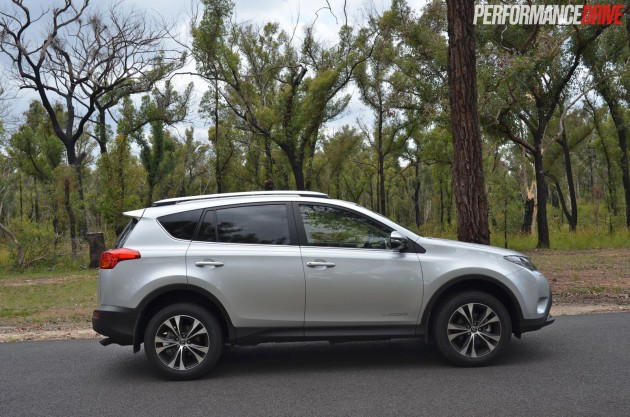