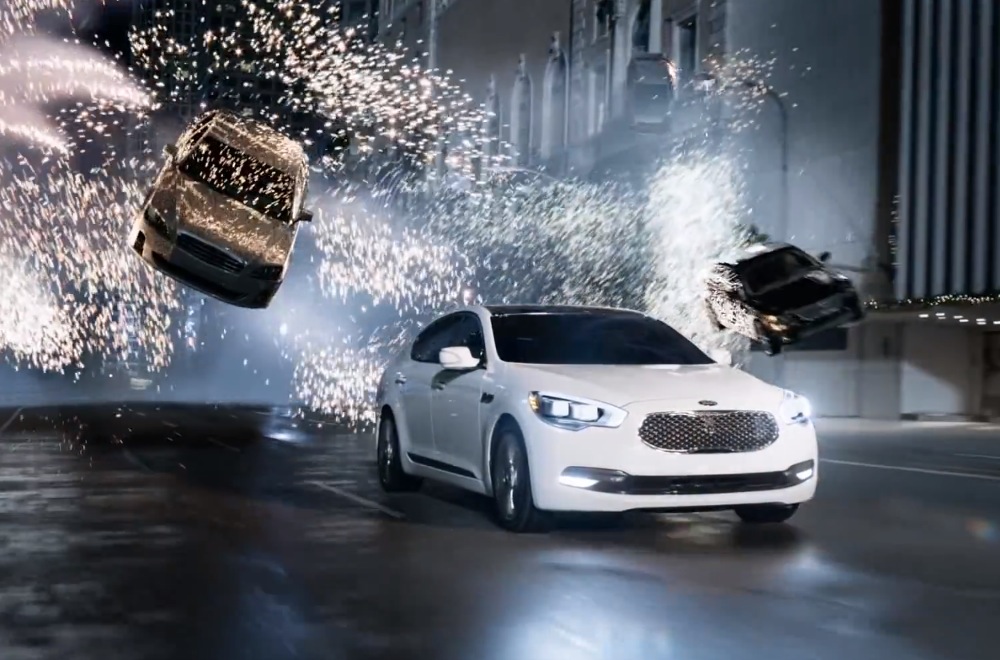 Although 2015 has now almost completed the first week of its 365-day road trip, there is still time left to indulge in nostalgia and to remember some 2014 automotive treasures. In this perspective, we endeavoured to present you with a selection of last year’s car commercials; more in particular those that are most worthy to soak up your precious internet data. Furthermore, in order to make sure that your sensitive eardrums would be treated with sweeter tones than raucous engine screams, we tried to ascertain that the Chosen Ones all featured a toe-tapping or ear-ensnaring soundtrack.

After several hours of total isolation with YouTube (and chocolate) as our only companion(s), we are happy to say that our lengthy viewing sessions have resulted not only in strained eyes, but also in the following alphabetically listed enumeration of audio-visual pearls:

“The evolution of luxury continues,” confirms the smooth voice-over at the end of this clip, which aims to capture snapshots of sumptuousness throughout history. Gracing our retinas are some beautifully designed transport scenes, such as images of a splendid golden litter crossing an Egyptian vale and footage of a bumpy yet boastful ride on a bejewelled elephant. Soon afterwards, the appearance of an elegant ebony carriage in an 18th century courtyard swiftly leads to shots of the present, where a couple happily explores the breathtaking hilly countryside before parking their 2015 Cadillac Escalade in front of their austere snowy mansion. All these moments are musically glued together by means of the funky guitar riff of David Bowie’s ‘Fame’, with Beatle John Lennon on backing vocals.

A modern cowboy, a truck, and a very ‘eligible bachelor’: those are the main ingredients of this Chevrolet commercial. In a one-minute fairy-tale, the American car manufacturer stages the seemingly sorrowful story of a white and russet bull (the bachelor, indeed). We follow the single as he travels the country in his owner’s Silverado, remaining thoroughly stoical despite the rustic charms of the endless grasslands passing by. Eventually, however, bovine bliss does seem possible for our horned protagonist after all as he leaves the vehicle and enters a field full of attractive cows. Meanwhile, Hot Chocolate delivers the tunes of flirtations with their hot hymn ‘You Sexy Thing’.

While Chevy’s bull suffered from his (initially) unsuccessful quest for true love, the male leads in this video have to deal with being utterly lost in the desert. After the sudden presence of two Fiats – one of them with rapper Diddy on the passenger seat – leaves them slightly befuddled, they snigger in disbelief, ascribe the vivid visions to mirages and wearily plod on, until they arrive at ‘Soirée’, Diddy’s exclusive oasis party. But although the background track, Pharrell Williams’s smash hit ‘Happy’, very much tempts even the most exhausted legs to start shaking, the wandering duo decides to leave the drinking spree as soon as they realise the impossible; that the Fiat present has four doors. With the deriding line “Fiat only makes small cars – it’s not real”, the guys set off again, but not without (quite hopelessly) trying to bring Diddy along – his dry “Don’t do that” still has us in stitches.

It is merely half a minute long, but truly action-packed. Enjoy these amusing thirty seconds, in which a dad makes the most out of his father-daughter quality-time by swiftly rushing around the local parking lot, with his little girl in the back seat. Instead of laughing merrily or clutching the front seat in fear, the equally fuel-favouring child forcefully tugs at her own steering wheel toy, imagining herself as the glorious commander of the gas pedal. When daddy slows down to take a break, she can only respond with a deep sigh and a wordless but enthusiastic request for another ride, while the raw voice of Joan Jett encouragingly chants the energetic chorus of ‘Real Wild Child’.

For the Elantra’s promotional campaign, on the other hand, Hyundai hired The Big Bang Theory star Johnny Galecki. Looking overly confident in his sleek Elantra, he tries to win the heart of a female Elantra driver in the midst of traffic. His efforts to secure a date are quite impressive, ranging from an abrupt explosion to some awe-inspiring stunt work with the all-time circus classic, the flaming hoops. Unfortunately (spoiler alert!), not even the seductive falsetto lines of Electric Light Orchestra’s ‘Evil Woman’ on his playlist are able to work their musical magic on the balky brunette.

This is Hyundai’s third video in our ranking, which prompts us to mention that its domination is entirely due to the invigorating quality of its commercials. The Genesis ad is once more spot on as it draws a parallel between the model’s automatic brake function and the sixth sense of young fathers. A dramatic utterance of ‘Remember when only Dad could save the day?’ follows a sequence of dads miraculously preventing their offspring from falling off a cliff or from running into a glowing hot barbecue machine, with Bruno Mars cheerfully singing ‘One Two Three’ in the background. Now that those saved kids are old enough to drive the Genesis, dad can finally relax and rely on the automatic brake to avoid any kind of disaster.

Matrix fans, this one is for you. None other than Morpheus (portrayed by Laurence Fishburne) has a starring role in this commercial, which praises the innovative opulence that Kia wants to convey to its clients. A completely ignorant couple is offered the chance to revisit their definition of luxury, which results in a glamorous Kia K900 excursion. And because getting a brand new car from a perfect stranger is not overwhelming enough, suddenly Morpheus himself appears in the back seat and theatrically bursts into Pavarotti’s ‘Nessun Dorma’ from Puccini’s opera Turandot. The effect is instantaneous; random objects explode in showers of stars and other vehicles start floating all over the place. Luckily, singing in the bathroom has less severe consequences.

With the ‘Amazing in Motion’ concept, Lexus plans to demonstrate the exceptional beauty of moving matter via various creative projects in photography and technology. One of them is this visually stunning video clip called ‘Strobe’, starring several stunt men and acrobats in special Hollywood-made LED suits. Each and every one of them represents a tiny step in a man’s journey across the Kuala Lumpur skyline, from tree canopies to bus ceilings and skyscraper rooftops. The trip concludes with one of the LED lads touching (surprise!) a Lexus. The result is eerily mesmerizing, just like Computer Magic’s hypnotic soundtrack ‘Running’.

Nissan clearly targets our emotions by means of this one-minute adventure that has ‘feel-good factor’ written all over it. Enter the tears, for it is hard to deny them access when you are bombarded with the heroic odyssey of a couple that chooses to hurriedly travel throughout myriads of states so as to reconcile a lost little bird with his migration mates. Safely carrying their feathered friend along in a box, they face a fruitful expedition with lots of all-knowing passersby who guide them wisely in the right direction. It is not unusual to keep hitting the ‘play again’ button in this case, and we cannot help but to agree with Jake Bugg as he vivaciously accompanies the clip with the insightful guitar-borne phrase ‘It should be easy, but it’s hard to leave’.

The German carmaker is proud to have the most vehicles on the road with over 100,000 miles (160,934 km) on the odometer, so the promo team resolved to make a funny car commercial in celebration. The central words of wisdom underpinning this clip read as follows: “Every time a Volkswagen hits 100,000 miles, a German engineer gets his wings”. The ad further shows all sorts of ‘proof’, displaying various VW workers who suddenly sprout cream-coloured plumage in the office and even in the toilet, to the happy notes of Giorgio Moroder’s ‘Doo-Bee-Doo-Bee-Doo’. A highly sceptical girl expresses her doubts forthwith, though: “And I’m sure [that at] 200,000 miles, rainbows shoot out of their butts.” No, we are not going to tell you what happens next.