Triple 8 Racing has become the first team in V8 Supercars to test their new “Car of the Future” ahead of the new specification debut in 2013. 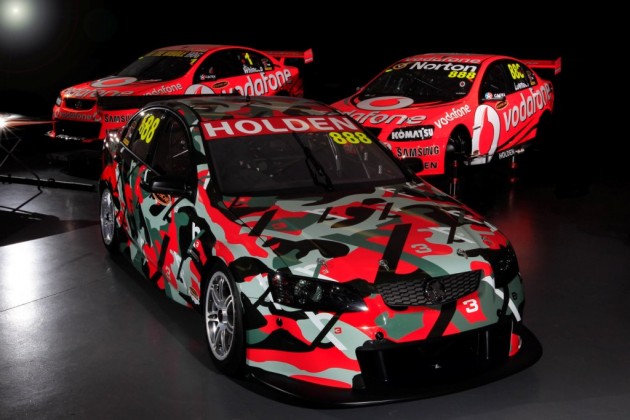 V8 Supercars champion Jamie Whincup got his first taste of his new car, which is to be one of nine 2013 Holden Commodore-silhouetted COTF chassis’ on the grid next year. It will  race alongside long time foe, the Ford Falcon, as well as V8 Nissan Altima newcomer.

“Overall its vastly different to what we normally play with,” said Whincup. “It’s a completely different beast in all areas of feel for the driver and is obviously different for the engineers as well.

“I think a day like today demonstrates that we are doing some major things not just for us but for the category as a whole.

“There are a lot of parts which are already homologated but already I can see that there will need to be some modifications.

“The gearbox doesn’t feel as nice and at the moment the changes are short and harsh.

“There were no secrets here today and we are talking to Frank Adamson about everything that was happening so he can report back.

“After our fourth run it looked like there was a problem developing in the driveline area so we’ll have a look at it and come up with a solution for everyone.”

Triple 8 – which is set to be sponsored by Red Bull in 2013 after Vodafone pulled out – will have a complete test day with the car at Queensland Raceway on Monday with fellow driver Craig Lowndes to get his first taste of the new Triple 8 car.

The car will be on display at this weekend’s Queensland Raceway Coates Hire 300 event in Ipswich.