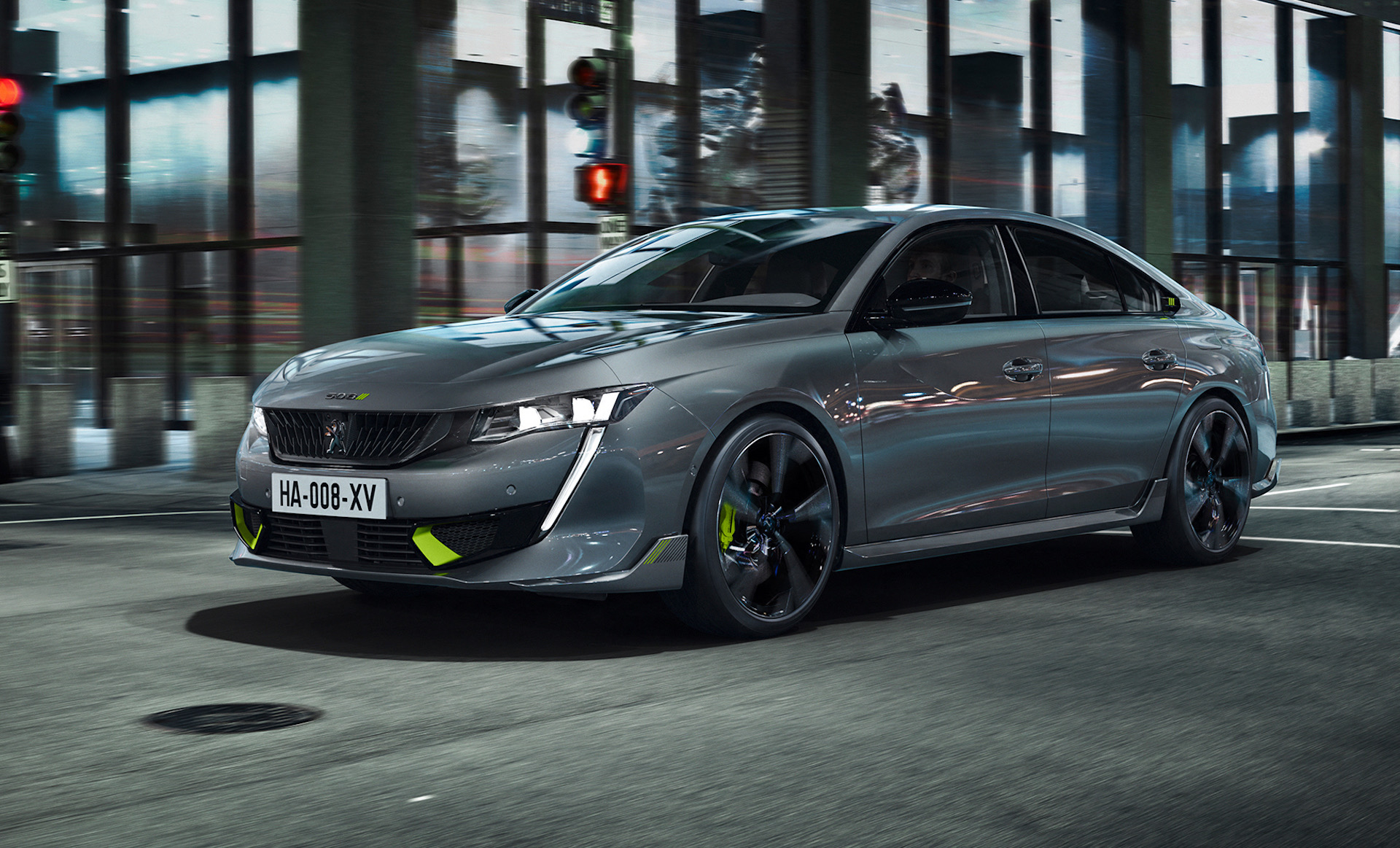 Now this is how you sports sedan and sports wagon. Peugeot has just unveiled two of perhaps the most stunning mid-size performance offerings we’ve seen in a long while. Introducing the 508 Peugeot Sport Engineered. 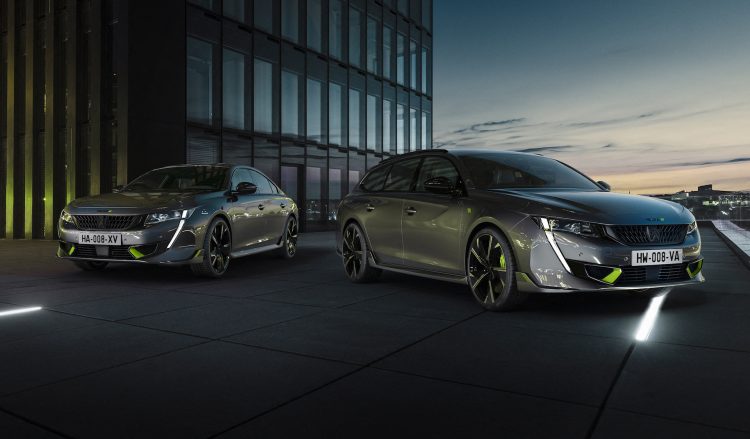 The new model has just debuted via a special online presentation hosted to media around the world and it is based on the concept model that debuted last year. Both Fastback and SW (wagon) forms are being offered. They become the first models introduced by the newly-formed Peugeot Sport Engineered division.

Firstly, the design. At the front is something Peugeot calls “Kryptonite claws”, referring to Peugeot Sport’s new logo with three green claw marks. There’s also aggressive daytime running lights that strike downward from the main headlight into the front bumper bar, and LED taillights that are inspired by the classic 504 coupe.

A sophisticated grille sits at the front with detailed black mesh and Kryptonite green highlights, with slim yet prominent skirting around the body complete with winglets on the front corners, trailing edge of the side skirt, and the rear corners. Finishing it all of is a set of 20-inch alloy wheels wearing Michelin Pilot Sport 4S tyres. These hide performance brakes with Kryptonite green calipers.

The powertrain is a bit of a masterpiece, actually. It was developed to showcase the technological capability of Peugeot Sport, drawing inspiration from its motorsports endeavours, including WRC, Dakar, and Pikes Peak. The new powertrain also comes in as the most powerful showroom engine system offered by Peugeot, ever.

It consists of a 1.6-litre turbo-petrol four-cylinder that develops 147kW/300Nm, paired with an 81kW electric motor at the front and an 83kW electric motor at the back. Combined, the system develops an impressive 265kW and 520Nm. Peugeot says this is enough to see 0-100km/h clocked in 5.2 seconds. Although it doesn’t quite stretch to 500hp like the concept, 265kW puts it in direct firing line with cars like the Kia Stinger GT. 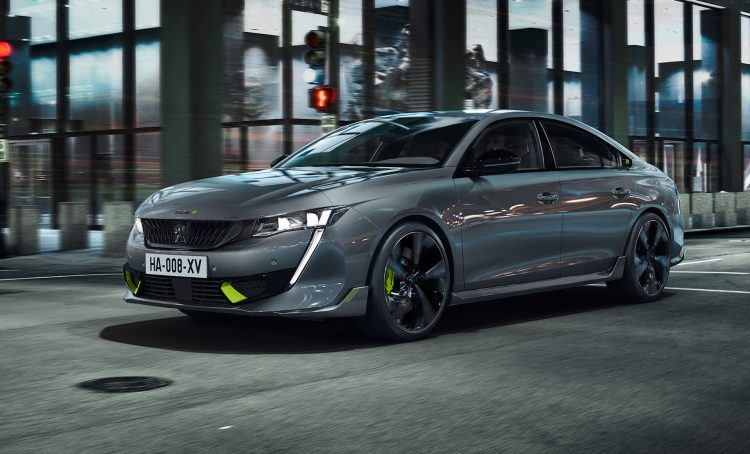 The system isn’t just a hybrid, either, but a plug-in hybrid. That means owners can recharge the vehicle via a socket. On a pretty standard 7kW EV outlet, the company says it takes less than two hours to recharge the 11.5kWh battery, or under seven hours using a standard household outlet. When fully charged, drivers can activate Electric mode and enjoy around 42km of emissions-free driving (26 mile range). The WLTP fuel consumption average is an equivalent 2.03L/100km.

As for the driving modes, there five to choose from: Electric, Comfort, Hybrid, Sport, and 4WD. Each of these configures the powertrain and other systems for optimum characteristics for the given demands. Comfort mode softens the suspension for “high comfort” driving, for example, while 4WD mode optimises traction for slippery surfaces. 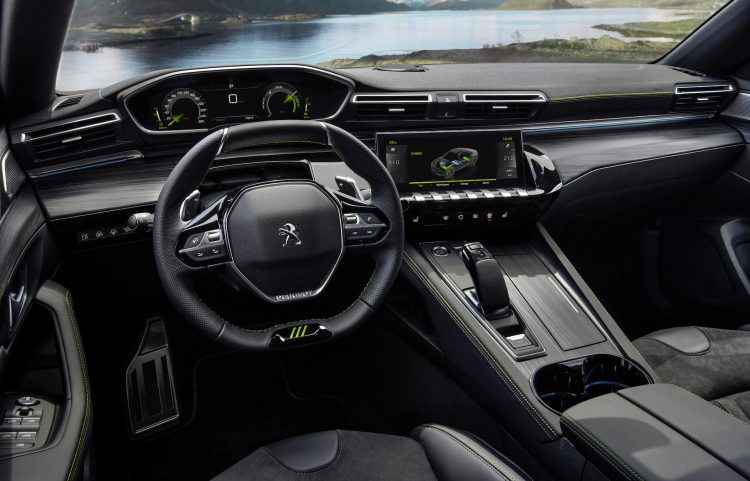 Lately, Peugeot interiors have been extremely well presented. Cool colour themes and trim combinations are providing a really nice distinction from the rest the crowd. And a similar philosophy has obviously been applied in here. The huggy seats feature a combination of Mistral Nappa leather and soft Alcantara, and the rest of the cabin is presented in double Tramontane grey and of course Kryptonite green stitching.

The company’s i-Cockpit includes a digital head-up display, along with a 10-inch HD capacitive touch-screen for the infotainment systems. A Focal hi-fi sound system, which comes as standard, is sure to fully immerse passengers into the suave atmosphere.

So, when can you get your hands on one? Well, it will go on sale in Europe next month. Production will take place in Mulhouse, France. As for Australia? At this present stage there are no firm plans in place, although things may change if there is a good business case here.