Ever wondered what’s the definition of a ‘pocket rocket’? Meet the RevoZport MINI Coupe Targa Raze tuning package for the MINI Coupe and MINI Roadster. It pretty much sums it up. 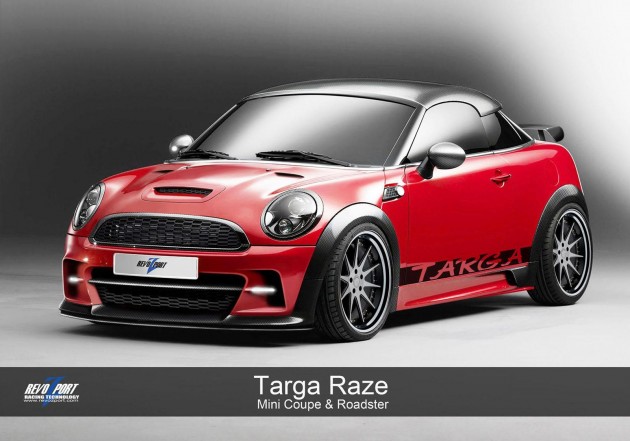 Starting with the engine, RevoZport – a company known for tuning BMWs – takes the 1.6-litre turbocharged inline four and stuffs it with two new chunkier camshafts, retunes the engine computer, and fits a larger intercooler, boosting overall power out to an impressive 186kW.

The power increase, also thanks to a full titanium exhaust system (weighing 5kg), puts it well ahead of the John Cooper Works Coupe/Roadster which offers 155kW.

In the JCW, we’ve tested 0-100km/h in just 6.4 seconds. It’s unknown what the RevoZport pack will do it in but we’d bet it would break through into the 5.0-seconds region. 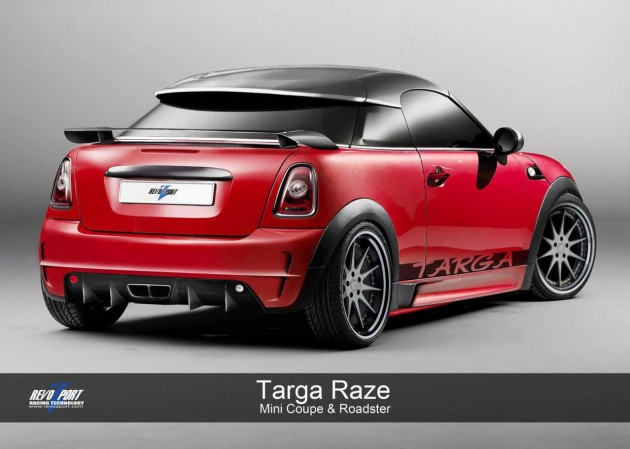 Along with serious engine performance upgrades the RevoZport Targa Raze kit also comes with a comprehensive and fully functioning bodykit.

There’s an aggressive rear bumper bar with an integrated rear diffuser at the back, while the front gets a new bonnet and a chunkier front bumper bar. The kit is made from carbon fibre and Kevlar for lightweight advantages, saving up to 30kg.

The angry little beast is then topped off with a set of RevoZport alloy wheels that are tucked up well into the guards with help of a sports lowered suspension setup.

What a cracking fun car it must be to drive.