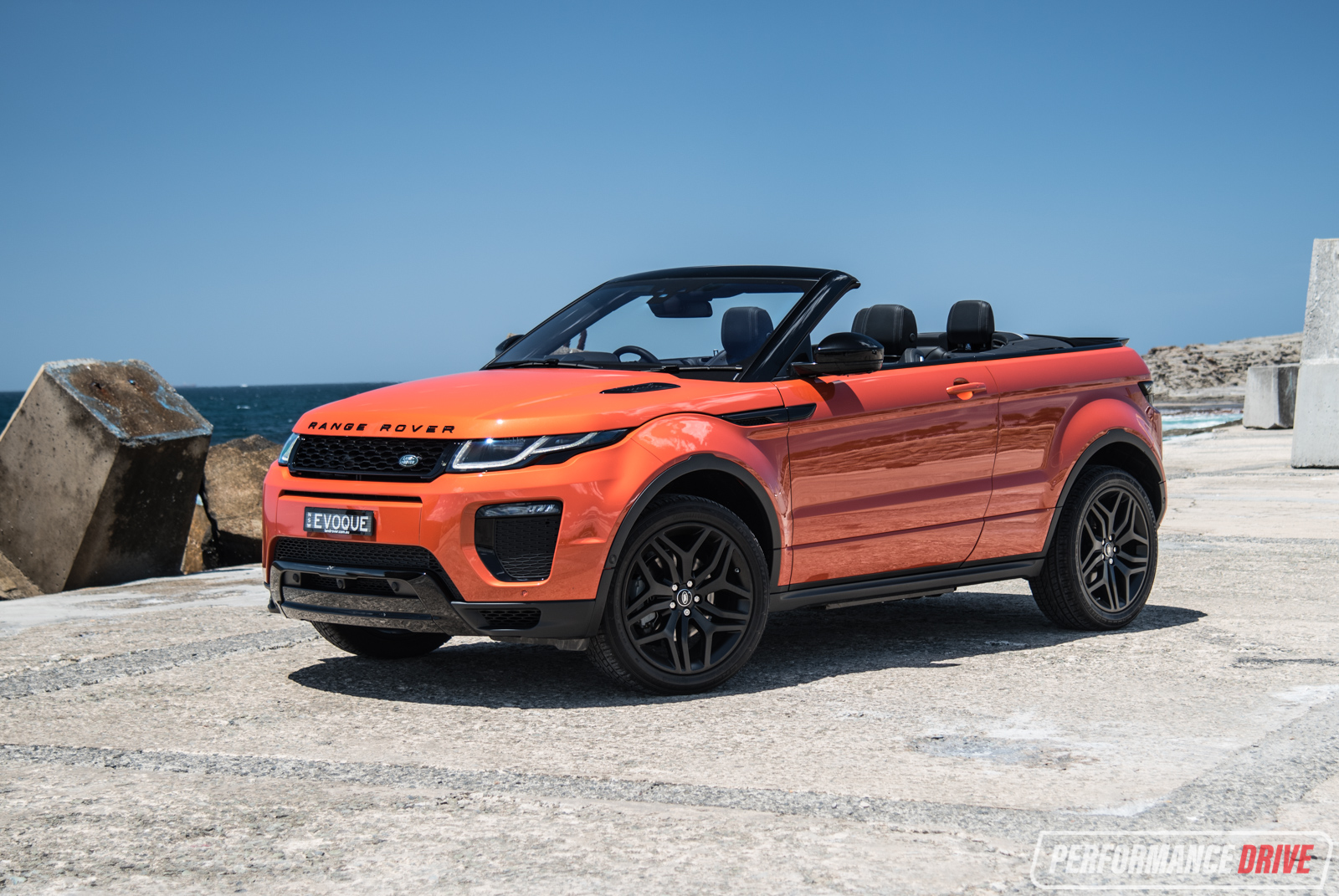 Welcome to the most gender-neutral vehicle Land Rover offers. Yep, it’s a convertible version of the hugely fashionable Range Rover Evoque. If you’re looking for a vehicle to show off your affluent leisure lifestyle, this could be your new best friend. 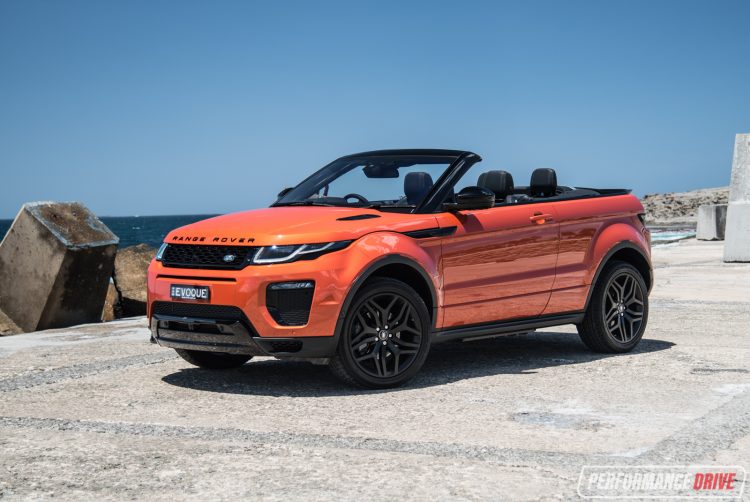 The Evoque convertible has to be admired, regardless of your tastes, simply for being out-there and unique. It’s the only convertible luxury SUV on the market – you literally can’t buy anything else like it – which means exclusivity doesn’t get much higher. The Evoque has already cemented itself into the car market as one of the most stylish SUVs, with this convertible version only enhancing this by being more exciting and more fun with its open-air capability.

Australian buyers have a range of variant levels to choose from, including turbo-diesel versions and trim levels ranging from SE to HSE. All models are in ‘Dynamic’ guise (that’s the sporty exterior trimmings and black highlights). Here we’re sampling the top HSE Dynamic with the Si4 turbocharged petrol engine. Prices start at around $85,000 for the base SE Td4, and top out at $92,800 for this HSE Si4 (all excluding on-road costs). 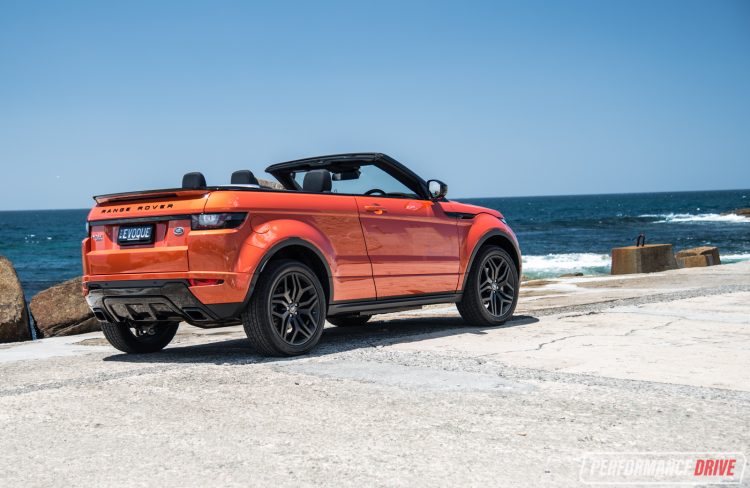 There are two different interior personalities to the Evoque drop-top; roof up and roof down. With the roof up it’s essentially a sporty, coupe atmosphere inside just like the three-door hardtop variant. With the black leather option as tested, it’s quite dark inside but various brushed metal trimmings do provide sparkles of light, boosting its prestige appeal. There’s also some very cool ambient lighting at night.

With the electric-folding roof folded down however, it’s a completely different place. When you first roll the roof back it’s immediately more interesting and exciting, just being in it. Part of this sudden increase in thrill comes from the exclusivity; no other luxury SUV on the market is able to drop its roof, let alone with the style and cachet of the Evoque. In typical Jaguar Land Rover fashion, the cabrio is pretty much identical to the concept model.

We expected the concept’s silhouette to be somewhat ruined by the installation of thick roll-over bars and chunky pillars for the production model. But it’s not like that at all. With the roof down you get a completely flat upper body line that runs with the window sill. Only the seat headrests and the windscreen stand above this line, resulting in a very elegant and attractive stance. If you like the idea of lots of people looking at you, this will be an instant self-confidence booster. 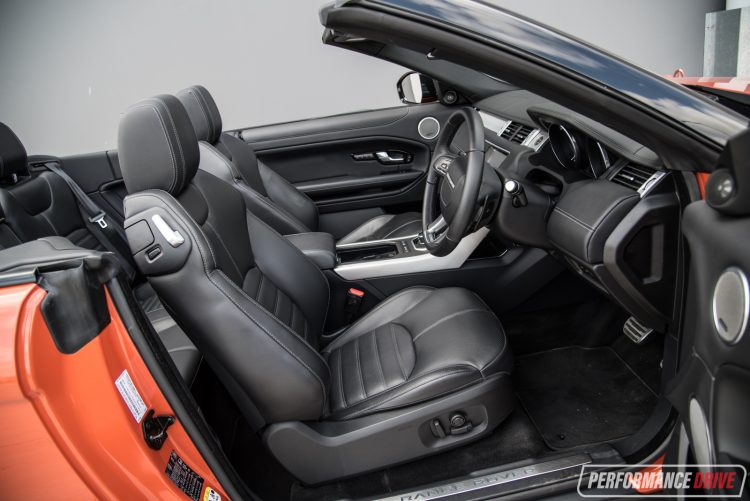 Onlookers, no matter where you drive, will be gazing over your way. Interestingly, we noticed the more prosperous parts of Sydney showed a more positive attraction to the vehicle, while the outer suburbs were more likely to feel the need to shout something out at us – positive and negative (jealousy?).

Being the top-of-the-range model, this Si4 HSE test vehicle comes packed with luxuries and cool technologies. Chief among which is the company’s latest 10.2-inch touch-screen interface with InControl Touch Pro. It’s a great system and easy to understand, with swipe and pinch functionality just like a tablet or smartphone. Satellite navigation is standard, along with various media apps, an in-built hard drive, head-up display, and full Bluetooth connectivity with voice command. Like most voice command systems other there, you do need to persevere. Sounds are expelled through an 11-speaker sound system as standard, or an optional 660-Watt Meridian setup with 13 speakers ($2950).

Where the Evoque convertible falls down a little is with practicality, compared with the conventional version anyway. Range Rover has cleverly packed in the soft-top roof with a sophisticated folding mechanism that’s very compact. But even still, the cargo area, which can only be described as a chute, can be awkward for carrying the shopping, for example. You need to reach right in like you’re digging to pull a rabbit out of a burrow. It’s not as dignified as the rest of the vehicle, in other words. Capacity is rated at 251 litres, which is smaller than what you get in a Toyota Yaris (286L). 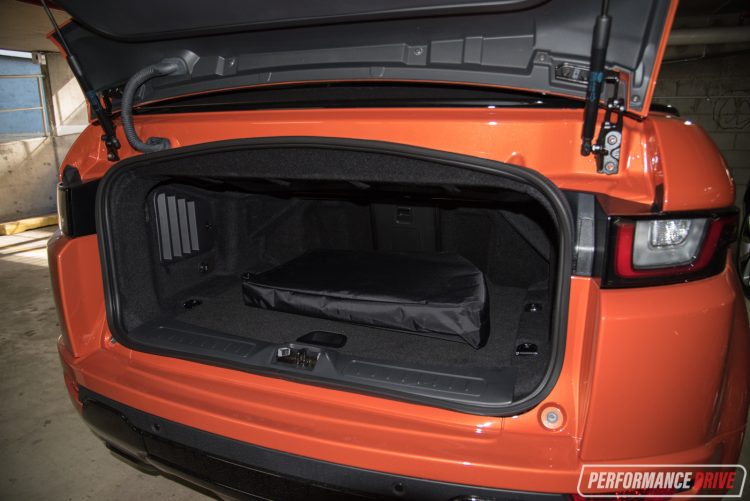 The roof can be raised while driving at speeds of up to 50km/h, in 21 seconds. So if you get caught in a sudden sun shower it’s good to know you don’t have to immediately stop the vehicle and potentially cause an accident just to deploy the roof. In most suburbs and in the city, you’ll be able to raise the roof with no stress in regards to slowing down traffic. It can also be folded back down again in 18 seconds. As standard the convertible also gets a “Roll-Over Protection Device”, which sees two aluminium roll-over bars automatically pop out if the car thinks it’s about to tip over, for whatever reason. These pop out in around 90 milliseconds, Land Rover says, providing protection and clearance from the ground.

Under the bonnet is Jaguar Land Rover’s 2.0-litre turbocharged petrol engine. It generates 177kW and 340Nm, which, if you’re not that interested in engines and outputs, is about the industry benchmark for this size motor. Across the 0-100km/h sprint we clocked a best of 8.33 seconds. It actually feels punchier than this, especially through the middle of the rev range, going from 40km/h to 80km/h. The engine is matched up to a nine-speed automatic with four-wheel drive. It’s an on-demand four-wheel drive system that mainly runs in front-wheel drive mode unless slip is detected, or if certain driving modes are selected.

Speaking of which, there are a handful of terrain types programmed into the drive system. After all, this is a Land Rover. We weren’t game enough to do a proper off-road test, however, we’ve heard plenty of good things about the regular Evoque’s capabilities. As long as you keep in mind the wheel and tyre sizes – this test vehicle features 20-inch wheels – it should be more than satisfactory for light off-road use such as on dirt roads and across packed sand. Minimum ground clearance is rated at 215mm, but the approach angle is reduced from 25 degrees to 18.5 degrees due to the sporty Dynamic bodykit package. Snowy conditions are probably where buyers will most utilise and appreciate the Evoque’s adventurous side. 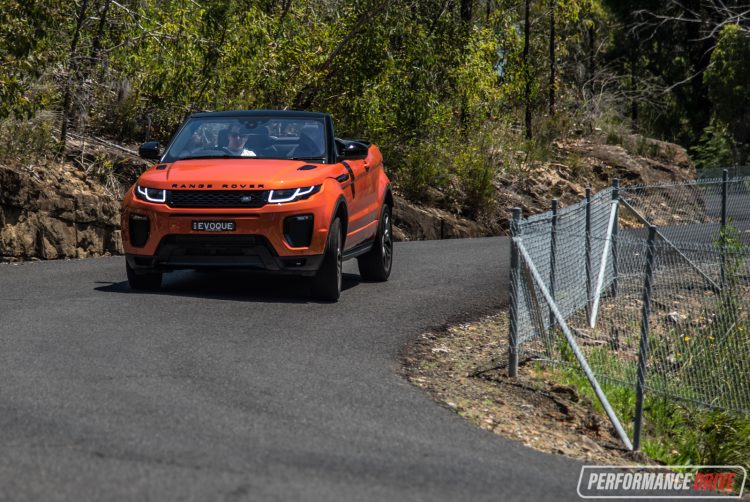 The Evoque has always been a decent-handling SUV, being loosely based on the old Ford ‘EUDC’ Mondeo platform. Land Rover has made significant revisions to the platform since receiving it from Ford, with around 90 per cent of it and its attachments bespoke to the Evoque. As a result, body roll is almost non-existent and cornering grip and agility is fantastic, particularly for an SUV. It feels like a sports car, darting into corners, and it hangs on with confidence and unyielding stability.

Driving down your favourite mountain road is a lot of fun with the roof down. You can really take in your surroundings and enjoy the fundamental pleasures of motoring, more so than in the regular Evoque. About the only area where we find the drive experience to be let down is with the nine-speed automatic. In manual mode, working the paddle shifters and driving spiritedly, it’s engaging and enjoyable. In either of the auto modes (D and S) though, the transmission seems very confused. It just can’t make up its mind and often bursts out with a disturbing and very sudden downchange, or it simply sits in a tall gear and lags. On a positive note, the exhaust lets out a very… positive note, in any gear. It sounds like a rally car.

Land Rover has equipped a nine-speed to help with efficiency. But this isn’t a particularly impressive area either. The official average consumption is 8.6L/100km. For comparison’s sake, the more powerful Porsche Macan 2.0T (185kW/370Nm) is rated at 7.4L/100km, while the 270kW Mercedes-AMG GLC 43 consumes 8.8L/100km on the same test. In the real-world we returned an average of around 11L/100km, made up of both enthusiastic driving and lots of highway cruising. In any case, if economy is a high importance to you, there’s always the diesel options to turn to.

Where this vehicle performs best is down at the beach, along the esplanade, at night or in the summer sun. It fits into this surrounding perfectly, and it tends to be more enjoyable because of this. 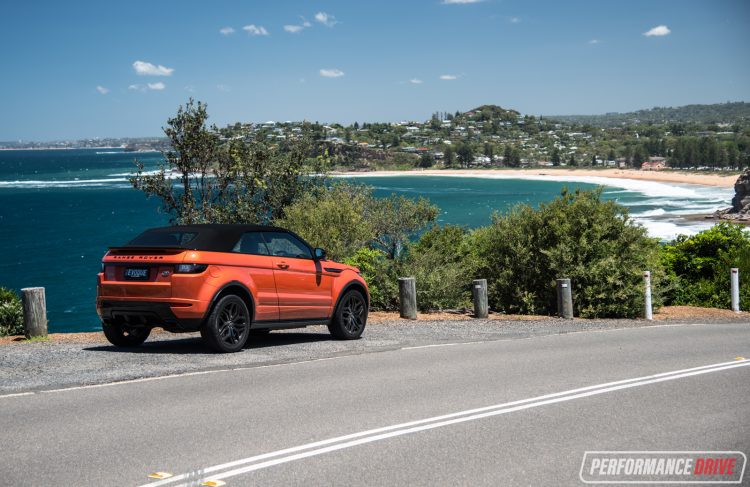 We admire Land Rover’s courage in launching the Evoque convertible onto market. It’s a crazy concept idea let alone a mass-production business plan. No other carmaker has made a bolder move in this segment. It’s already the most stylish SUV in the class, and now it’s ready for the Italian Riviera. Be prepared though, you’ll receive endless attention and you’ll probably need to hire your own personal assistant to carry all of your shopping.