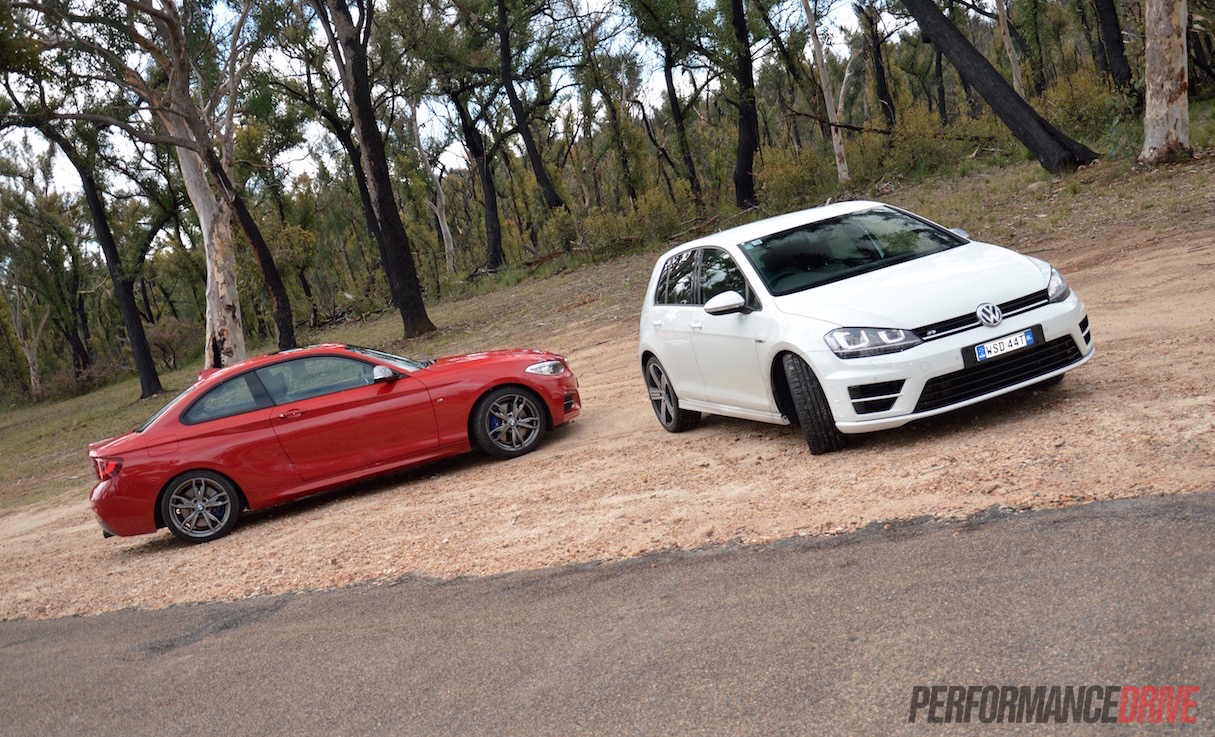 If you’re looking to buy a premium compact performance car, the BMW M235i and the Volkswagen Golf R Mk7 are at the top of the game in our opinion. But, which one should you spend your hard-earned money on? 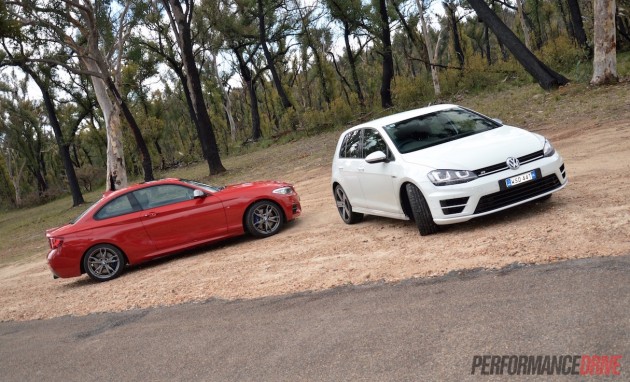 To get the formalities out of the way, the BMW comes with a 3.0-litre turbocharged straight-six engine producing 240kW of power and 450Nm of torque. The silky smooth unit can be matched up to a six-speed manual or eight-speed auto with rear-wheel drive. Either option retails from $79,930.

In the Golf R, which is the flagship Golf sitting even higher than the GTI in the range, you get an Audi-developed 2.0-litre turbocharged four-cylinder pumping out 206kW and 380Nm. Next to this you have the option of a six-speed manual or a six-speed dual-clutch DSG auto, paired with a Haldex-controlled all-wheel drive system. The manual starts from $51,990 while the DSG starts from $54,490. Here we’re pitting the automatic versions head to head. 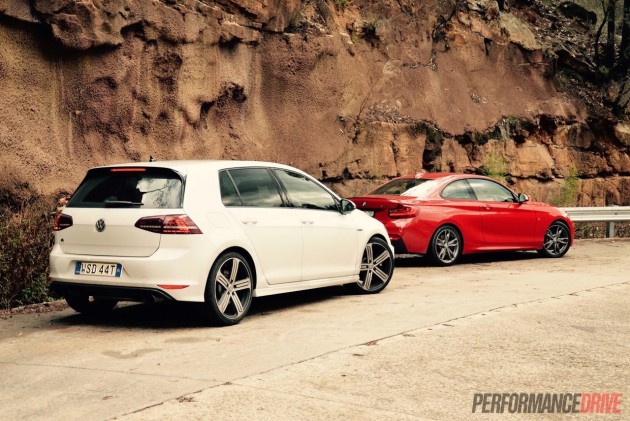 Both of these cars are seriously quick. Both cars feature a launch control system, and off the line, both push you right back into your seat. The Golf in particular violently jumps from 0-60km/h, to the point where you can feel your face muscles being stretched. In the BMW, the rear wheels scamper and skit for traction off the line, chirping hard into second gear.

In the end, although both feel about the same, it’s the BMW that pulls the strongest. On a private road in dry conditions we timed 0-100km/h in 4.7 seconds, and 0-200km/h in 16.6 seconds. Compared with the less powerful Golf R, which manages 4.9 seconds and 19.7 seconds, it is close but it doesn’t have the same long-legged stride as the six-cylinder Beemer.

Volkswagen Australia needed to detune the Golf R for Aussie conditions, which means we only get 206kW while the Europeans get 221kW. You don’t notice any restriction in power, but higher in the rev range it does seem to plateau out a fraction, especially as speed builds. We’d imagine the Euro version would maintain the same forward g-force for the entire rev range.

Neither engine presents major turbo-lag. In fact, they both feel like they produce more than their factory quoted torque figures. Looking at the specs, the BMW reaches 450Nm from as low as 1300rpm and carries it up to 4500rpm, while in the VW the max torque figure of 380Nm is available in a slightly wider window, from 1800rpm to 5100rpm. That’s 3300rpm of prime real estate in the Vee-Dub versus 3200rpm in the BMW. 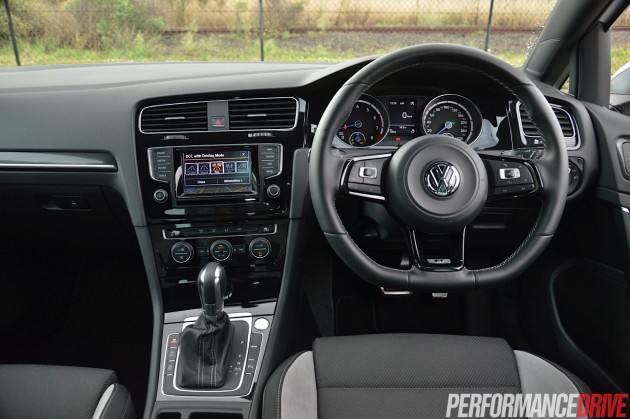 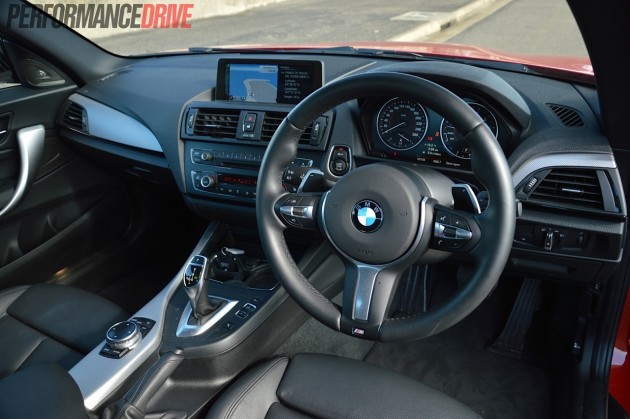 Now, there’s been a lot of criticism thrown Volkswagen’s way in regards to its dual-clutch ‘DSG’ automatic transmission. The company has been making constant improvements, but unfortunately it still delays and rolls back a bit on hills and in between reverse and drive. When you’re driving enthusiastically and enjoying the car however, it’s a spectacular piece of equipment. You can always depend on it, changing down at the snap of your fingers, and upshifting quicker than you can blink. If you use the manual mode with the paddles you also get that trademark fart from the exhaust during upshifts.

In the BMW there’s an eight-speed sports automatic transmission made by ZF, which also puffs out flatulence between upshifts. It’s superb to use, changing gears immediately at your command, both up and down. Where it shines is with utter smoothness. You can watch the tacho jump instantaneously between revs as you change gear, and there’s very little (if any) interruption in forward progress. Neither gearbox here is better than the other in our opinion. The VW DSG is awesome for outright performance, while the BMW unit is better for city driving and sheer smoothness.

The Golf is undoubtedly more stable and surefooted through the bends, especially in wet conditions. Not that we would recommend this, but you can literally plant the throttle just before the apex on a wet corner and the Haldex all-wheel drive brains will make calculations quicker than Einstein and serve torque to separate wheels according to how much traction they have. There’s no slip at all. It rips you around with pure conviction. 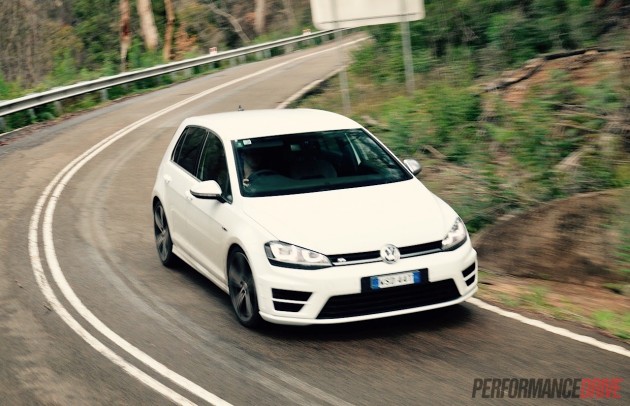 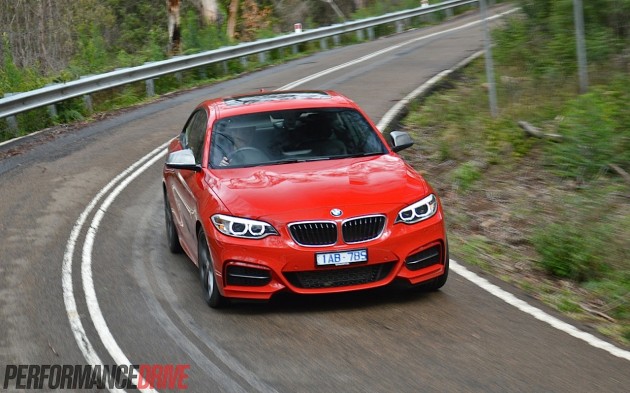 In the BMW, corners can be a more joyous experience if you like a bit of slip and tracking movement. You feel more connected through the steering too, with wonderful feedback and feel. You can also change the cornering character with the accelerator more than you can in the Golf. There is very little understeer on the limit, and you can hit high g-forces through the entire arc of a bend.

Of course, oversteer is readily available in the BMW, despite the lack of a tight/locking differential. Whereas in the Golf you need to perform a bit of witchcraft with the controls, a bit like pressing buttons on a computer game to unlock cheats. If you do manage to get a slide going, it only lasts a few moments due to an almost square footprint and the all-wheel drive system immediately pulling things straight. 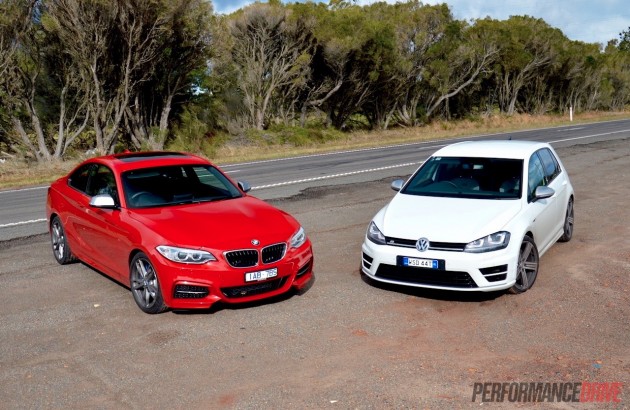 That’s the key point here. If you’re in the market for a performance car around this price range, you should definitely buy one of these incredible machines. Both are awesome in their own way. The Golf is slightly more practical with five doors, and the Beemer is a bit quicker and offers more interactive handling.

Both stimulate the senses at equally high levels, via the noises they make, the cool understated looks they offer, and the quality interiors they present. If it were someone else’s money, we’d take the BMW just because we’re a bit childish and enjoy oversteer. If it were our money though the Golf R is a sensational value yet epically capable hot hatch.

You can read more about these cars in our individual BMW M235i review and Volkswagen Golf R review here.