Due to increasing demands for Porsche’s other vehicles, production of the new Porsche Boxster has been shifted from the company’s Stuttgart-based Zuffenhausen plant to Volkswagen’s Osnabruck plant. 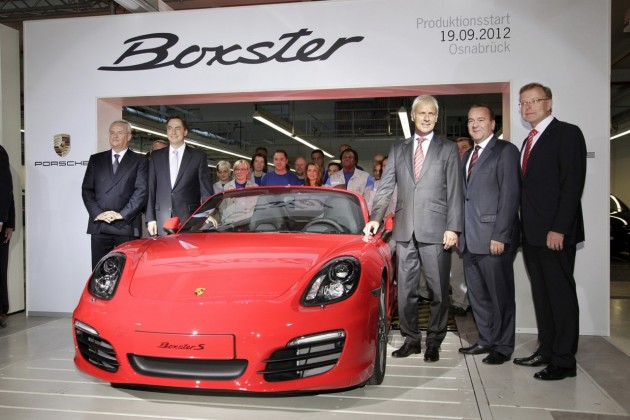 The company’s other main factory in Leipzig builds the Panamera and Cayenne SUV, however, it’s about to be filled to the brim with production orders for the upcoming Porsche Macan medium-sized SUV.

Volkswagen has now made the decision to move the Boxster over to the Volkswagen plant to give both facilities more breathing space. The Volkswagen facility currently builds, among other vehicles, the other more humble open-top German icon; the Golf Cabriolet.

“The key factor in this decision was the very good expertise of the workforce at Volkswagen Osnabruck. Our sports cars are in the best hands here. After all, we all have the same understanding of quality. Osnabrück will become part of our success story.”

Meanwhile Martin Winterkorn, chairman of the board of Volkswagen Group, recently said,

“The production of the Porsche Boxster in Osnabruck is a clear sign that Volkswagen and Porsche are growing together. It creates synergy effects that will benefit customers, employees and the plant.”

It’s understood only some Boxsters will be produced at the VW factory, while others will continue to be built in Zuffenhausen.