The Porsche 918 Spyder will be Porsche’s new flagship supercar, a successor to the V10 Carrera GT. Only it doesn’t feature a V10, or even a V12, instead it will come with a hybrid powertrain. Yes, we’ve come to the point where even hypercars are looking to use hybrid technology. 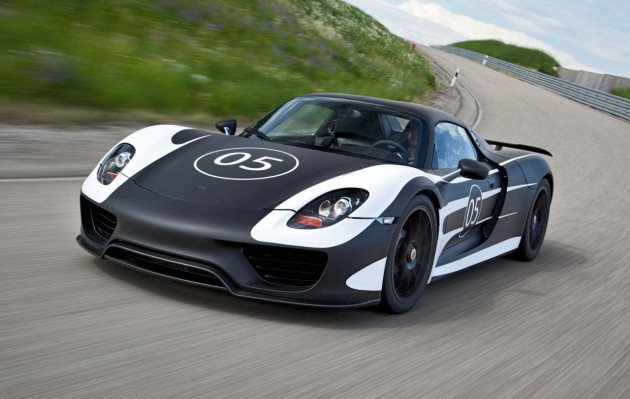 More and more details are coming through of the 918 as development continues, providing snippets of detail. The latest is in the area of overall horsepower.

Up until now Porsche has said the 918 will produce 419kW from its 4.6-litre V8 petrol engine, with additional power coming from a front electric motor and a rear electric motor. These electric motors have been rated at 80kW and 90kW, respectively. (Combining to 589kW)

At a media function at the American Le Mans Series Grand Prix of Mosport over the weekend, Porsche Cars Canada CEO Joe Lawrence revealed that prototypes are now producing 800hp (597kW). And the testing hasn’t even been completed yet.

Not only will the new model be a genuine powerhouse, it will also be extremely fuel-efficient thanks to the hybrid setup, and also to its lightweight nature with help from a construction comprising of mostly carbon fibre. They’re talking an average fuel economy rating as low as 3.0L/100km.

As you can imagine, the price of the hypercar will be very high, with Porsche already slating a US price of $845,000. This would easily translate to over $1 million in Australian money once, and if, it reaches our market.

The Porsche 918 Spyder is set to be unveiled during the third quarter of 2013, with sales taking place shortly after.