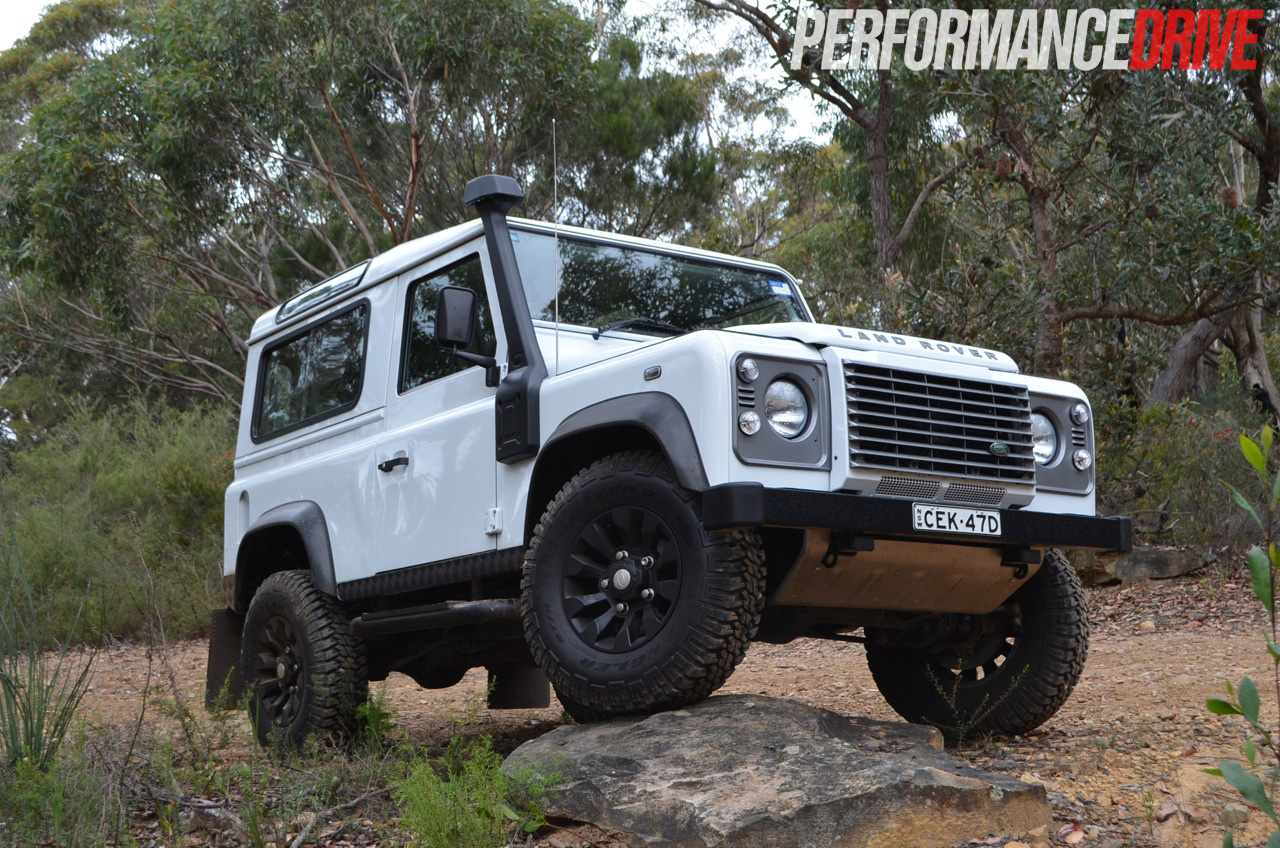 Before spending a week in the Land Rover Defender 90 we found bush performance driving was not as easy as it looks. These little creatures, namely the 90 as tested here, will climb just about everything and anything thanks to minimal overhang, and a well-sorted 4×4 drivetrain that has seemingly stood the test of time. 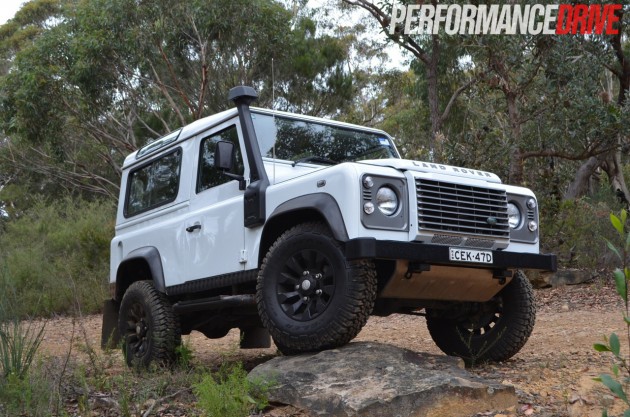 Although the current Land Rover Defender slightly differs from previous iterations, it isn’t all that dissimilar in it’s overall construction to the model that was launched almost 65 years ago. Sadly though, the Defender is on borrowed time mainly due to crash safety regulations around the globe becoming more and more strict. A totally redesigned model is due in 2015 which is expected to bring a lot more technology in this area.

We could see this as an opportunity to shed a tear, or an opportunity to seize the moment and grab one of these very much to-the-point vehicles while they’re still around. The current Land Rover Defender is about as much fun to drive as short-wheelbase 4x4s get. And you can bet your two cents that they command serious respect out on the road, and in the bush. It’s the kind of car that has just about everyone tilting their hat with a 10-inch wide grin. 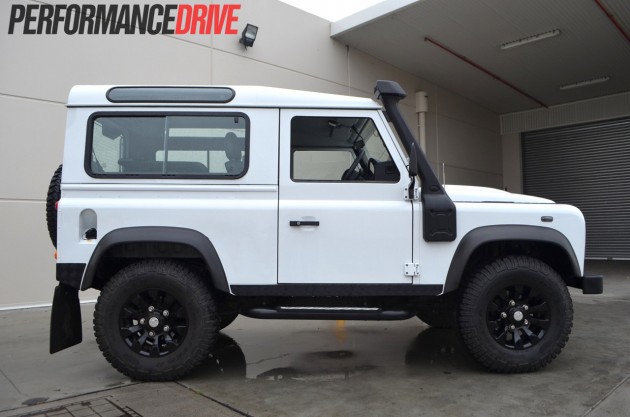 Under the hood sits a 2.2-litre turbo-diesel engine producing 90kW and 360Nm. Peak power is on tap from 2200rpm and continues through to 4350rpm. The engine is equipped with an Anti-Stall device that adjusts fuel at low speed to maintain steady power even as low as 1000rpm, which is perfect for clambering through tricky terrain. 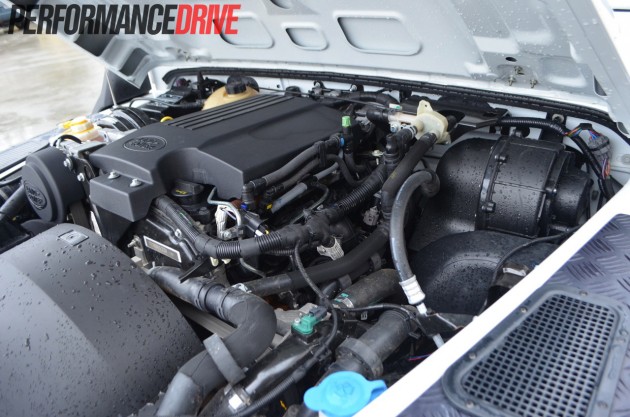 Suspension-wise the Defender features live-axle and single rate coil springs at both ends. 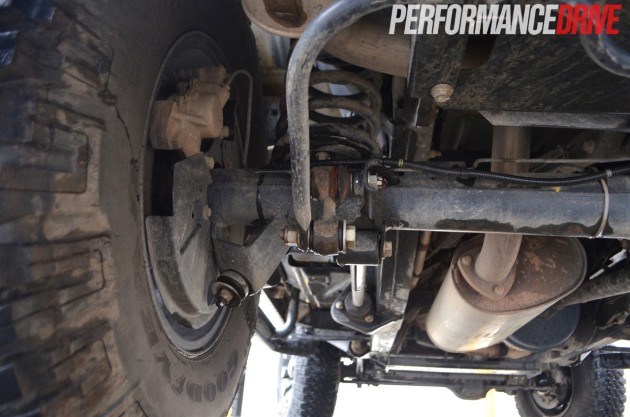 The Defender 90 has a very impressive maximum towing capacity of 3500kg.

Let’s get this straight, you don’t buy a Defender if you’re into creature comforts or serious ergonomics. This is a car that has army blood running through its veins.

The driving position is very upright and feels close to the b-pillar, so the best, and perhaps traditional way to drive a Defender 90 is with the driver’s window wound down and one arm resting on the window sill. If you’re tall, your left knee will slightly interfere with the steering wheel when you go for the clutch, but only just. 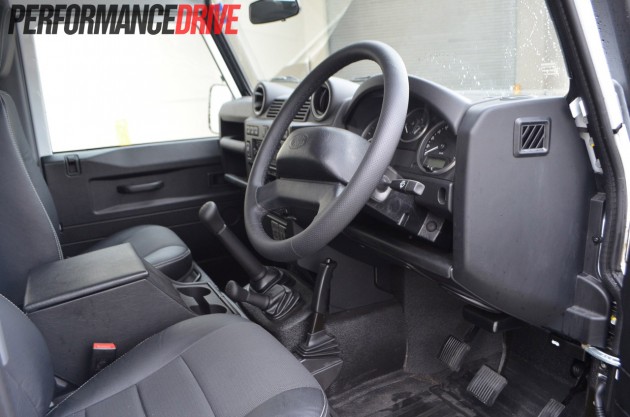 The front seats are comfortable and well padded, and look rather sleek with the optional partial leather and cloth material. The rear seats are equally as comfortable. Travelling in the rear of a Defender 90 has to be one of the most fun experiences and something everyone should do once in their life, especially off road. Access to the rear seats is best accessed through the rear door, using the foldable foot step to climb up.

The dash instruments are easy to read and all the available switchgear is less than an arm’s length away. The optional air-conditioning and heating system works extremely well at keeping the occupants happy, pumping air through top mounted vents and floor vents.

Early model Defenders were known to have below par climate control systems, but it’s certainly not the case with the current Defender’s further refined unit. 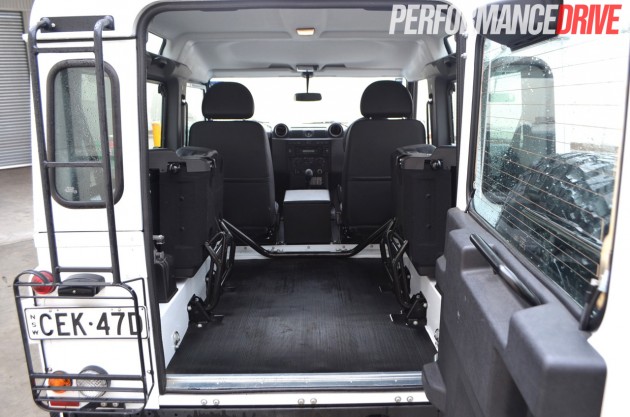 The Defender is equipped with power front windows, with manual sliding windows in the rear.

The dash design is very upright and to the point and matches well with the car’s industrial-strength persona. Front passengers are given a large grab handle if things get bumpy – a sign of the vehicle’s off road capabilities.

For those who like a bit of music, there’s a four-speaker stereo that features a CD player with AM/FM radio. Serious music lovers will naturally go for the optional MP3 player.

The body and cargo floor are made up of corrosion-resistant aluminium. The Defender design is a body-on-chassis layout, making it ideal for rough conditions and overall off road toughness.

The exposed pop-rivets and hinges visible on the 90’s exterior won’t appeal to everyone, especially with today’s pretty and curvacious/sleek 4x4s, however, these are true Defender character traits, adding to its retro modern-day appeal. In a car park full of neat sedans and soft-roaders, the Defender brings a sense of rawness. 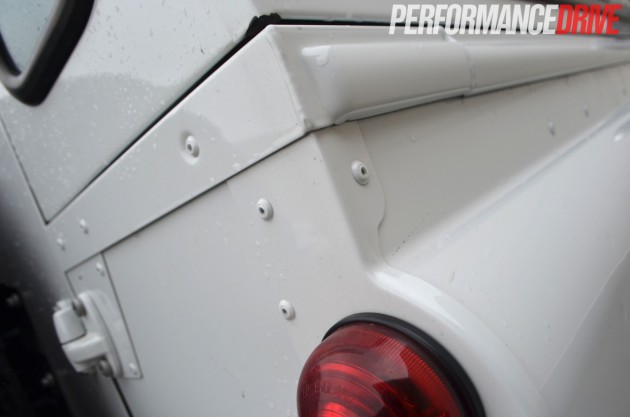 Our test model is fitted with optional black checker plate trim for the exterior, a snorkel and body flares, all adding to the look of a truly tough bush-ready machine (or perhaps a zombie apocalypse get away car?).

The large front grille, raised bonnet, and overall square design of the front end make the Defender look very commando when viewed through a rear-view mirror. The same can be said for the rear, from behind you’d expect no one other than Stallone to jump out, rifle in hand. 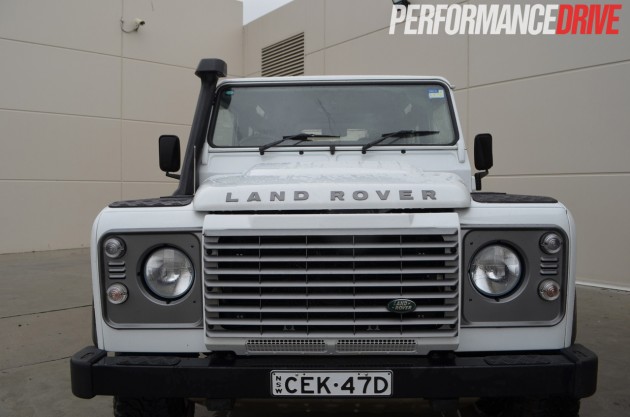 The current model Defender is equipped with ABS brakes and power-assisted steering. As far as safety equipment goes, that’s probably the Defender’s biggest let down. There are no airbags or a stability control system available. With safety regulations reaching new heights every year, and regulations varying from country to country, Land Rover knows the Defender is on borrowed time in some markets, hence its 2015 replacement.

LAND ROVER DEFENDER 90 – ON THE ROAD

You can’t rush through the actions when driving the Defender. The best way, and pretty much only way, is to drive it with a ‘steady as she goes’ attitude. If you want speed, then perhaps a supercharged V8 Range Rover Sport will better suit your needs.

Out on the road, grip from its knobby tyres is limited, but nonetheless good for a car with serious off road capabilities. With any movement of the steering wheel you can feel the body bobble about. It hints at every occasion that the best place for the Defender is off road.

However, it’s something you get used to and learn to trust as you barrel around the bends. Steering response off centre is a little lazy, but thanks to power assistance it doesn’t require Schwarzenegger-like arms to tackle a parking spot. 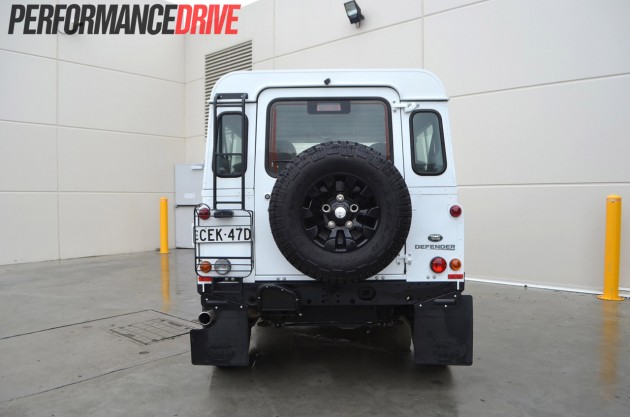 The 2.2-litre four pot pulls the little 4×4 along just fine. While it does take a few gear changes to get up to speed, once you’re chugging along you can easily cruise up and down hills, and maintain decent freeway speeds with ease – just don’t expect any speedy last second overtaking maneuvers.

The brakes do their job well, pulling up the heavy (1820kg) little 4×4 time and time again. The ABS responds well in off road situations, too, not becoming nervous or over zealous in its response.

If going bush is something you plan on doing regularly, then the Defender delivers in spades. With its short front and rear overhangs, it allows you to approach obstacles callously. Both the approach and departure angle is 47 degrees.

Our test model is fitted with the optional Goodyear Wrangler MT/R tyres that proved very useful over rocky obstacles, and in wet, sloppy conditions. 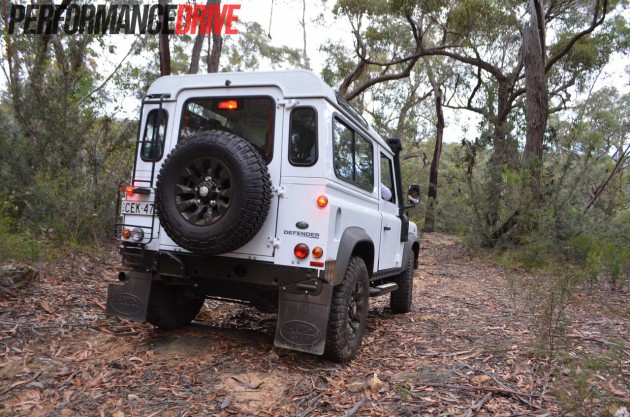 The Defender’s drivetrain proves hard to fault off road. Rather than relying on two drive wheels to get around like many other off road vehicles, the Defender constantly sends power to all four wheels, with selectable high and low range. 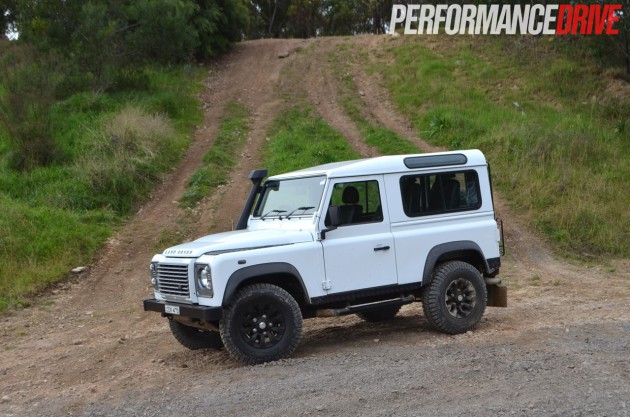 The factory-fitted centre differential lock helps to make mince meat of just about any off road track, keeping excessive wheel slip to an absolute minimum. The maximum recommended speed with the centre diff locked is 60km/h, which is certainly fast enough for off road trekking.

The Defender has a water wading depth of 500mm and a ground clearance of 323mm. The floor has removable rubber mats, so there’s no need to stress if a bit of mud creeps into the cabin; just grab the hose and wash it away.

While the Defender 90 is a serious bush-ready vehicle, we strongly encourage those who are interested in buying one to actually get out there and have a crack at some decent off road stuff. You’ll be mighty impressed.

The next Defender is yet to be fully revealed, which means the existing model is a vehicle that will likely become a desirable and collectable classic – you won’t regret buying one and keeping it until the wheels fall off… which we very much doubt would ever happen. Two thumbs up from us. 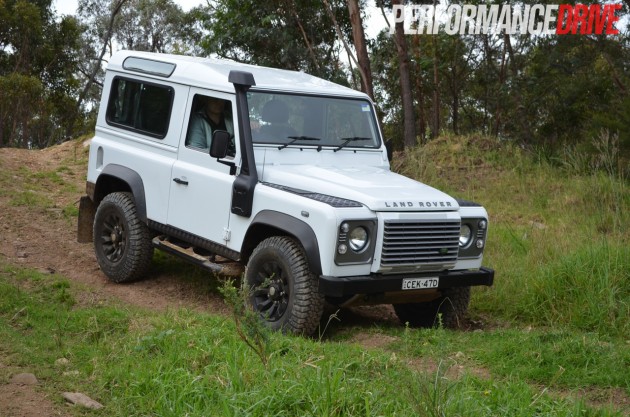 (Nearest rivals below in terms of sheer off-road performance and price, and not necessarily size or engine specification)