General Motors and Chevrolet have joined forces to raise awareness and money to help fight breast cancer. A pink-wrapped Chevrolet SS will be used as a pace car at three NASCAR Sprint Cup Series race weekends, with Chevrolet donating $250 for each lap completed. 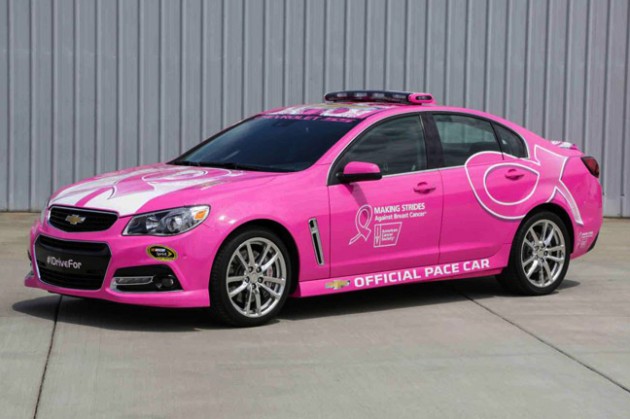 Chevrolet is also donating $10 for every person who takes any of its motor vehicles for a test drive during the month of October up to a value of US$130,000 (approx AU$148,000). Exciting Chevrolet models include the SS sedan, Camaro, and Corvette Stingray.

General Motors workshops, plants, dealerships, and facilities all over America will also be conducting fund-raising walks to help lift the total raised amount beyond last year’s US$1.1 million effort (approx AU$1.25 million). All proceeds raised will go to the American Cancer Society and the Making Strides Against Breast Cancer project. This year marks the fourth year in a row that the two have come together for a good cause, with the pair hoping to beat last year’s total.

The Chevrolet SS is based on the Australian-made Holden VF Commodore and receives the naturally-aspirated LS3 engine found in our HSVs, producing 309kW and 562Nm. It also uses the same wheels and brakes seen on the SS V Redline. When the VF-based Chevy SS was launched last year it marked 17 years since the American carmaker had offered a rear-wheel drive sedan to its customers.

According to the Australian Government’s cancer information website, breast cancer accounted for 28 per cent of all new cancers in women in 2010 with 14,181 new cases recorded. If you live in America, head to your closest Chevrolet dealership and test drive a new Chevrolet vehicle to help do your part in the fight to beat the horrible disease.