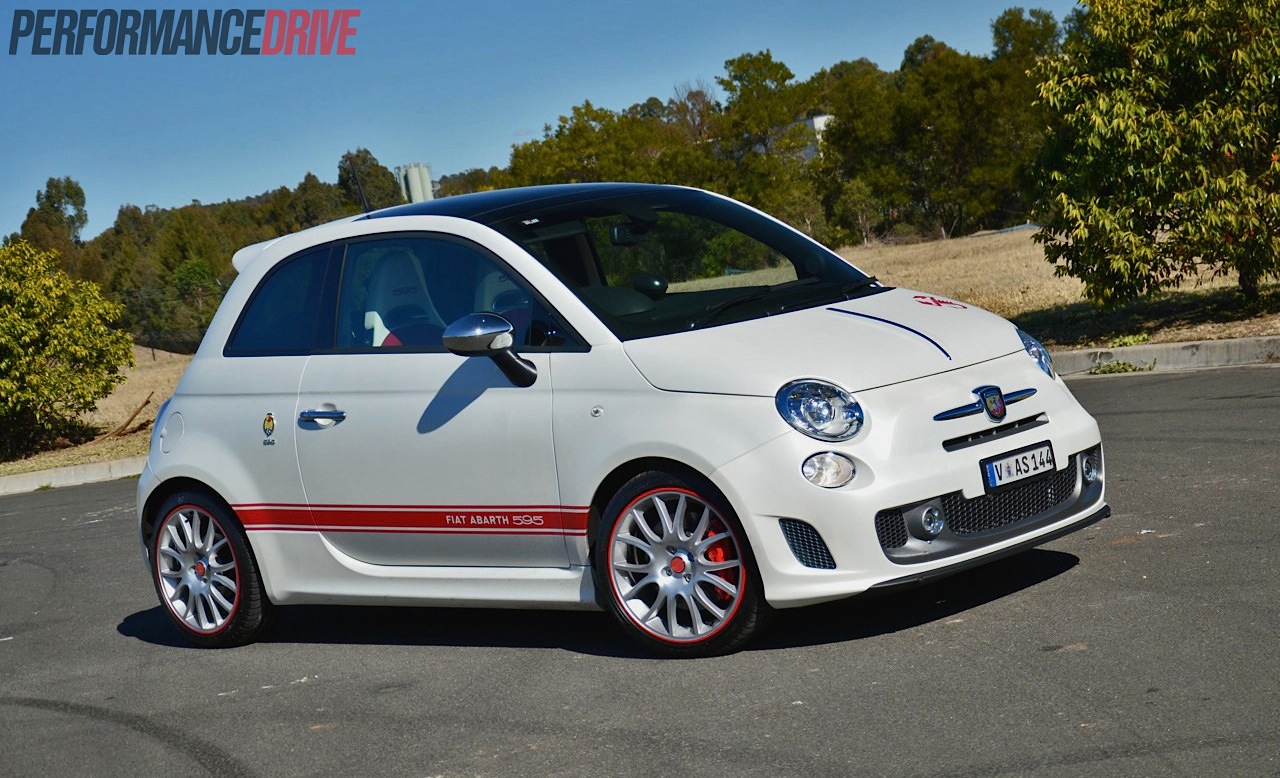 Driving the Abarth 595 50th Anniversary is like playing with an over-excited Jack Russell Terrier; most of the time you can’t keep up with it, but if you want to have some fun it will always be ready, panting excitedly, waiting for you to throw the ball again. 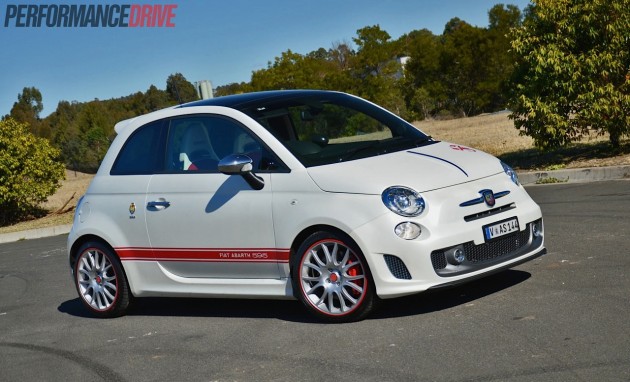 Fiat’s presence in Australia is only just starting to blossom now, despite being around in Europe for over one hundred years. Since the reorganisation of the distribution rights in Australia and the formation of Fiat Chrysler Automobiles, local sales have been on a steady rise. So far this year the local arm has sold 4467 vehicles (as of September VFACTS figures). That’s over double what it achieved during the same period in 2013 (2192), and quadruple what it achieved in 2012 (1011). Fiat is on a mission and it, at least on the surface, looks like it is succeeding at an impressive rate.

So as you would expect there are more and more models being launched in Australia, and more versions of everyone’s favourite Fiat, the Fiat 500. One of the latest is this limited edition called the 595 50th Anniversary. It, rather obviously, celebrates the 50th birthday of the original Fiat 500-based Abarth 595. Since the original 595 SS from 1963, with its 23.5kW 595cc engine, things have moved on quite a bit.

The latest edition gets a 1.4-litre turbocharged engine producing 132kW and 250Nm, making it the most powerful 595 ever. It comes with a five-speed single-clutch automated manual transmission with front-wheel drive, and a TTC torque transfer control differential (like a limited-slip diff).

Just 56 of these animated hot hatches have been secured for the Australian market, making it a very rare vehicle indeed. Prices start at $45,000, which is quite expensive for a compact hatch but you do get lots of performance and fun for your money, not to mention exclusivity. 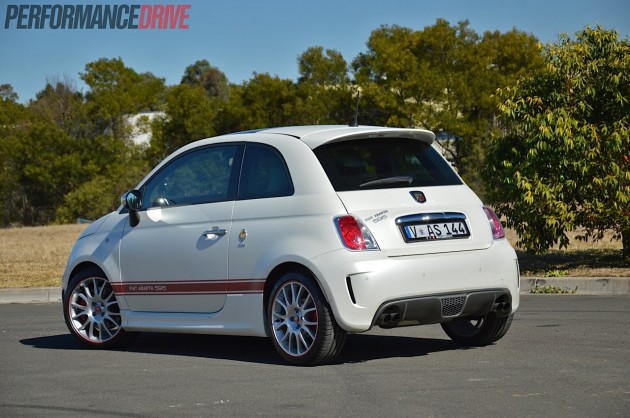 It’s such a stereotypical thing to say Italians love flamboyance and style, but after one look at the 595 it becomes hard to think otherwise. You could say it is the exact opposite of a Toyota Camry in terms of character and personality. There’s red racing stripes, flares and spoilers, four exhaust pipes at the back producing a cracking note, and a general racy attitude toward everything. It literally looks like it wants to race everyone.

Based on the Fiat 500, the interior is quite small and quirky. Fiat needs to update some of the functionality of some systems, mainly the very clunky radio unit sitting in the dash with its 1980s calculator graphics. There’s also a complicated speedo dial behind the steering wheel that likes to reflect the sunlight into your eyes at some angles. Conversely, you aren’t likely to be bored by the interior any time soon.

You get deep red leather seats that jump out at you like they have been retrofitted by an aftermarket specialist, with white backing in case you still find it all a bit dull. The red and white theme is carried across to the dash and door trims too. We aren’t really a fan of all of this colourful jazz, but we get it. This is a car to get you excited and it succeeds in doing that, before you’ve even started the engine.

Front seat accommodation is okay for this segment, however, the driving position is a little high and the steering wheel tips forward at the top with no reach adjustment, only tilt. For some reason Fiats and Alfa Romeos rarely offer a good driving position – it’s like it’s a company prerequisite. Most of the controls are within reach though and the button-operated transmission selector is kind of fun.

Boot space is the same as the regular Fiat 500. We can’t really sugarcoat it. It’s small. 185 litres small. You can fold the rear seats down to open up 496 litres which could be handy enough for singles and young couples living in the city, for example. In its defense, the Fiat 500 is a very small car. It’s a lot smaller than a MINI Cooper and Ford Fiesta. This means it’s extremely tight and nimble, and easy to thread through inner city streets and alleys.

Practicality is not one of the Abarth’s dominate traits. Instead, it shines bright with that upholstery. You also get aluminium pedals to dance on and a three-spoke leather-wrapped sports steering wheel with shift paddles to play with. Down below is a special build plaque to remind you that you are just one of 56 people in the country in a similar position.

It’s quite well equipped, offering full connectivity with USB and Bluetooth support inside, a decent six-speaker stereo with a sub-woofer, tinted windows, climate control, a tyre pressure monitor, and a large tilt/slide sunroof. ANCAP has awarded the Fiat 500 a full five-star safety rating thanks to seven airbags and electronic stability and traction control. You mightn’t have considered the Fiat 500 to be a safe car, but it actually scored a respectable 34.91 out of 37 in its most recent crash test. ANCAP said,

Mechanically, the special edition comes with Brembo brakes with cross-drilled discs, lowered sports suspension, a rally-like sports exhaust, 17-inch Magnesio Grey wheels, and a turbo boost gauge mounted on the dash obscuring some of your view. 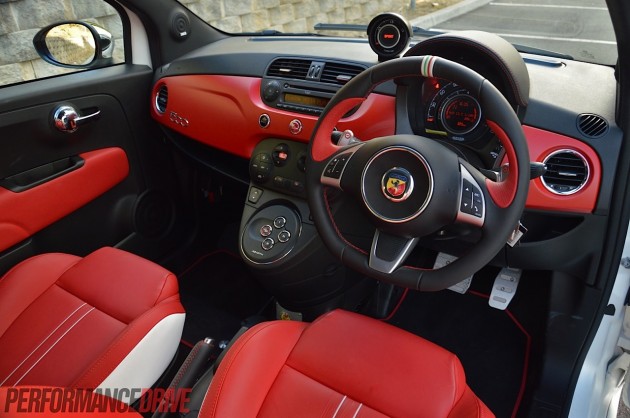 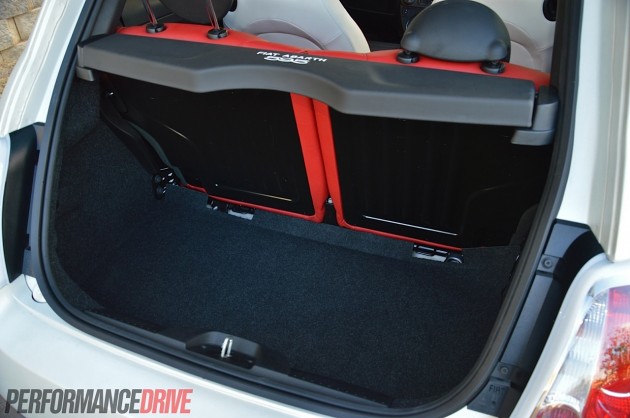 From the moment you hit the start button it’s sensory overload. The engine grumbles and growls with a deep bass resonating through an almost straight-through exhaust system, while the turbo bellows and whistles, settling to a quivering UFO-like tone. In fact, it sounds like a full-on aftermarket rally car. It’s really exciting (see video below).

Selecting the ‘1’ button to engage drive seems strange at first, particularly as the transmission doesn’t really engage first gear like it would in a conventional torque convertor auto. Instead, this is virtually a manual transmission underneath only it uses an automated clutch which doesn’t really engage until you apply some throttle. There is a definite elasticity to the take-up action; it won’t just take off like an auto. You need to allow for the slack to be taken up and for the clutch to grab.

Flooring it flat-out up through the gears is lots of fun. There is noticeable turbo-lag that seems to increase the sensation of speed (and enjoyment) thanks to the sudden spikes in forward g-force, with strong mid- to high-range torque pulling the 1035kg beast from as low as 3000rpm with no trouble at all. It loves to surge up long hills with the turbo screaming, hitting its peak boost pressure of around 22psi.

The acceleration and overall forward momentum is drastically interrupted by the auto transmission. If you stay on the accelerator as it goes up through the gears, which is what you normally do in an auto, the amount of time it takes to back off, change the gear, and then re-engage is laughable. We found it quicker and smoother to back off slightly on the throttle with each upshift. Even still, we timed 0-100km/h in just 6.5 seconds, which is a dashing time for a compact hatch.

If a more advanced dual-clutch-type auto transmission were fitted this would be an incredibly quick little car. It already is, but the transmission lets it down. It’s only a five-speed as well and the ratios are longer than they would be in a punchier six-speed.  You simply need to learn how to get the most out of it. Once you do, it can be rewarding.

Around corners it’s a hoot. It prefers smooth roads, like most cars, where it darts around with hardly any body roll and holds on with serious levels of grip. The steering is precise and engaging, giving you excellent feedback as to what the wheels and tyres are up to.

On rougher roads the rear suspension is a little bit nervous and it can’t catch bumps as well as some of the rivals. It would have been difficult for engineers to come up with a good compromise for the Fiat 500. With such a small footprint and short wheelbase, you can either go for a firm suspension setting which would make it handle like wasp while offering a bar-jarring ride. Or you can give some leniency to the ride, and that’s what Abarth has done. Out on the highway there’s no major complaint for the ride comfort and compliance. It’s a good setup for a vehicle of this size.

Overall, it’s not as composed or complete as rivals such as the MINI John Cooper Works or the Ford Fiesta ST, both of which aren’t really direct rivals. In Australia there are no competitors in the ‘micro’ hot hatch segment, which means the Abarth 595, by default, sets the standards – it would be interesting to see what another manufacturer would do in terms of offering similar performance inside tiny dimensions. 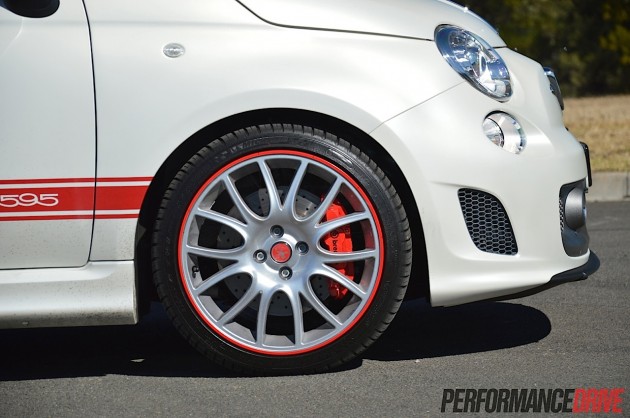 It’s not a conventional car, the Abarth 595, so you can’t really treat it like one or compare it to one, like some other ‘motoring experts’ have done in the past. This is a tiny car yet it offers the power and performance of a larger and more stable one. We think it’s remarkable what Abarth has done here.

Sure, there are a number of vehicles on the market at the moment that are quicker, more advanced, better equipped, cheaper, and more fuel efficient, on paper. It’s a harsh reality. But if you’re after a car that will liven up your morning commute and put a spark back into your motoring life, this is certainly capable of doing that. It’s another stereotypical thing to say but it’s the way it makes you feel. It has passion and it feels alive.

Unfortunately, cars like these probably won’t be around for much longer – with its oversized turbocharger, loud exhaust, and old-school transmission – and for this reason you tend to forgive its quibbles and instead cherish its honesty and energetic charm. If we had a top 10 dream car garage one of these would be in it for sure. There’s nothing quite like it. 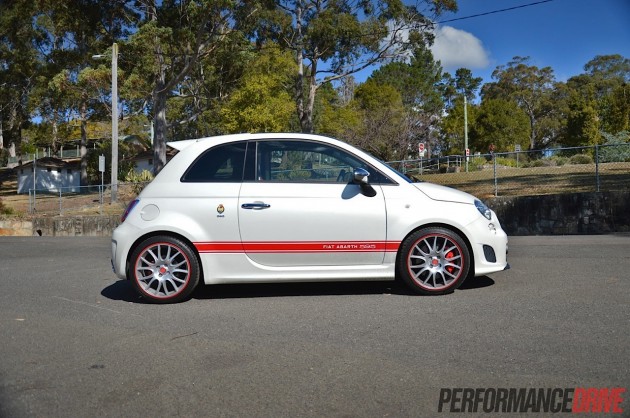 No direct rivals (according to VFACTS). Vehicles below are mentioned based on their price and performance.