Sitting at the Suzuki stands at the 2012 Australian International Motor Show is a trio of aftermarket-style modified Suzukis, including this unique Kizashi Sport carbon fibre show car, and the Swift Sport Custom reported earlier. 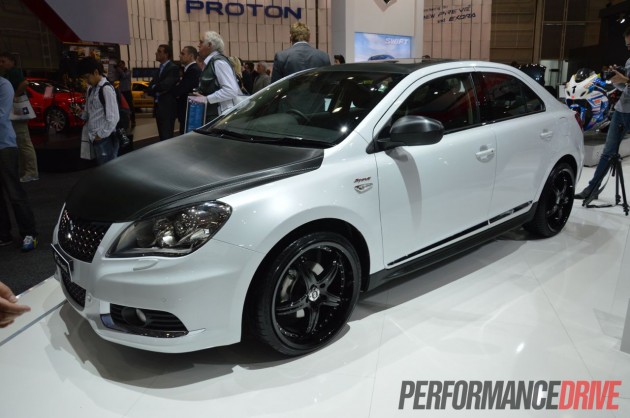 Limited details on the carbon edition were revealed at the show, other than the fact that it’s based on the flagship Kizashi Sport AWD. The standard version comes with a 2.4-litre naturally aspirated four-cylinder producing 131kW and 230Nm (full Kizashi Sport review here). The engine sends power to an all-wheel drive system via a CVT auto.

The show car features a full carbon fibre bonnet and a carbon fibre roof, reducing plenty of weight from the standard car’s 1600kg mass. A carbon lip spoiler at the rear, carbon side mirrors, and a set of carbon side skirts complete the transformation. 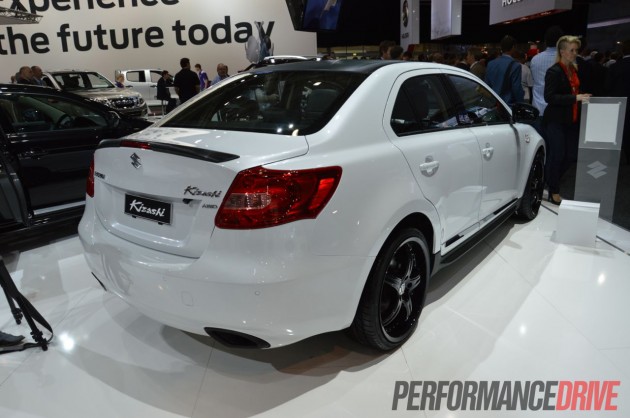 Carbon fibre is always such a cool material, especially when it is left in its raw state with no thick coating of clear paint or even coloured paint over the top. In the Suzuki’s case, the carbon is bare goodness.

Suzuki has decided to go with a complete white and black theme with the Kizashi, blending in some black 18-inch alloy wheels with the carbon additions. There’s also black exhaust outlet surrounds, black fog light bezels, and a black grille.

Unfortunately, Suzuki doesn’t have any plans to make these accessories available for option at the time of vehicle purchase. The car does provide some inspiration though in regards to its aftermarket modifications potential.