Reports are surfacing detailing more of the technical specifications and unbelievable power of the Bugatti Veyron successor, dubbed the Chiron. 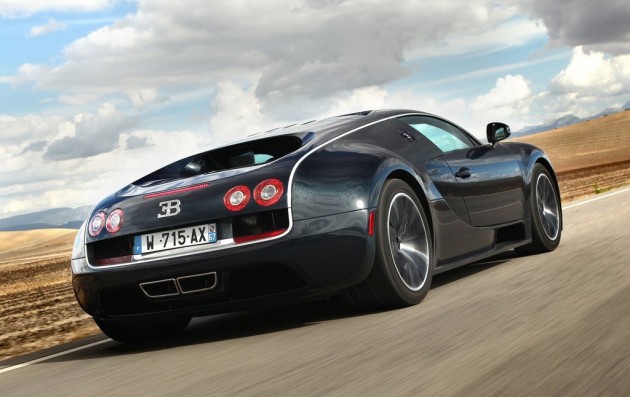 Bugatti is set to once again throw down the hypercar gauntlet with the new model, apparently wanting it to hit the 0-100km/h mark in just 2.0 seconds. There’s also speak of a top speed of around 463km/h, with a 500km/h speedo – first production car with a 500km/h speedo?

Don’t expect a slightly improved Veyron platform either, the new model will reportedly have 92 per cent new parts, including new technologies like e-turbos, cylinder-deactivation and direct injection. Bugatti is said to be sticking with the 8.0-litre W16 engine, although output will probably be lifted to at least 1100kW/1500hp. That would make it even more powerful than the record-breaking Veyron Super Sport.

Despite the power increase, the Volkswagen Group brand apparently wants fuel consumption to remain within 20L/100km for the combined cycle. That sounds like a lot, but keep in mind the Veyron Super Sport is rated at 23L/100km. For comparison, an automatic V8 Holden Commodore SS produces 260kW and returns an official average of 11.8L/100km, yet the Bug’ has a lot more than twice the power.

Initially believed to make an appearance in 2015, Volkswagen chairman Ferdinand Piech has confirmed the Chiron will make its debut next year. This will, no doubt, be one to look forward to.