Ford Performance Racing has given it’s Car of the Future an entire day of testing at Sydney Motorsport Park (formally known as Eastern Creek Raceway). 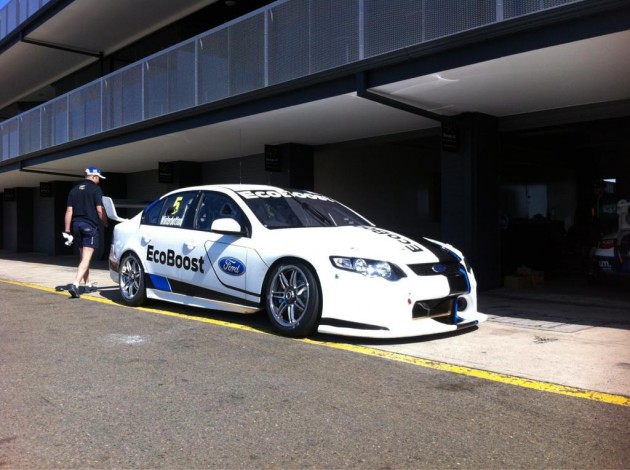 Both FPR drivers Mark Winterbottom and Will Davison got behind the wheel, with Davison getting to drive for the first half of the day while Winterbottom took control in the afternoon.

Davison confirmed that the car was quicker than their current Ford Falcon V8 Supercar, despite the car being several months off it’s racing debut.

“It’s been fun to unleash it on a fast and flowing circuit compared to Winton and we’ve already gone quicker than when we were here for the race,” Davison said at the end of the day.

“It has been another good day. Until we get here next year with everyone at the pre-season test we’re not really going to know where we stand but we are sticking to our schedule and everything is on track.

“We’ve undertaken some quick qualifying runs and some longer stints to get a read on tyre degradation and because we’ve had faultless reliability we’ve been able to achieve a lot.

“These tests are all about learning the car and how the rear end works with the new geometry and also re-learning how to make a car go fast given all the changes for next year.”

“It was a good day working on our planned program as we continue to learn about the new car. We focussed on some of the bigger changes to try and narrow the set-up window,” Nilsson said.

“It was a good opportunity to test at a new circuit, particularly one with high-speed corners as there aren’t many of those at Winton. It was also a positive day to complete a significant number of laps without a single reliability issue which is a credit to everyone at FPR.”