Mercedes-Benz will unveil the new Mercedes-Benz CLA-Class at the 2012 North American International Auto Show in Detroit in January, ahead of a ‘CLA 45 AMG’ performance version later in 2013. 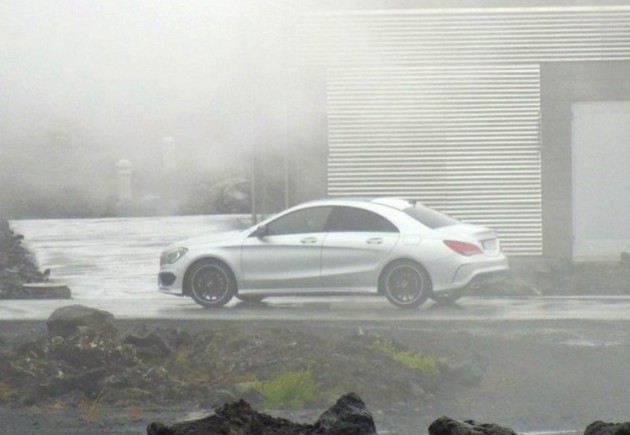 For those who may not have heard of the new CLA, it’s a compact four-door coupe, like a miniature version of the current CLS. It features a swooping roofline, a low and elegant side profile like a coupe, and four doors.

A pre-production model has already been spotted while undergoing a photoshoot, revealing what appeared to be a sporty AMG bodykit (pictured).

The new model is based on the company’s new MFA platform which also underpins the latest B-Class and the new A-Class. This means most of the CLA range will be front-wheel drive, sharing similar sorts of drivetrain packages as the B-Class.

Fortunately, a tuned, high performance AMG version is also on the way. Spy photographers around the world have spotted prototypes out on the Nurburgring testing in Germany. They feature all the usual tasty highlights you’d expect on an AMG model, including bigger wheels and brakes, sports suspension, and various aerodynamic enhancements.

Under the bonnet, the CLA 45 AMG is expected to share the same powertrain as the upcoming A 45 AMG. In that, power will come from a heavily boosted 2.0-litre turbocharged engine producing around 260-265kW. All that grunt is sent through a 4MATIC all-wheel drive system. The CLA 45 is likely to come with the same all-wheel drive setup.

According to international reports, the AMG version will debut at the 2013 Frankfurt Motor Show in September. We’ll keep you updated with all the coverage from the Detroit show in the coming months.