The very first Mercedes-Benz C 63 AMG Coupe Black Series has landed in Australia. The stunning Diamond White example will be used for certain duties at the Australian F1 Grand Prix later this month. 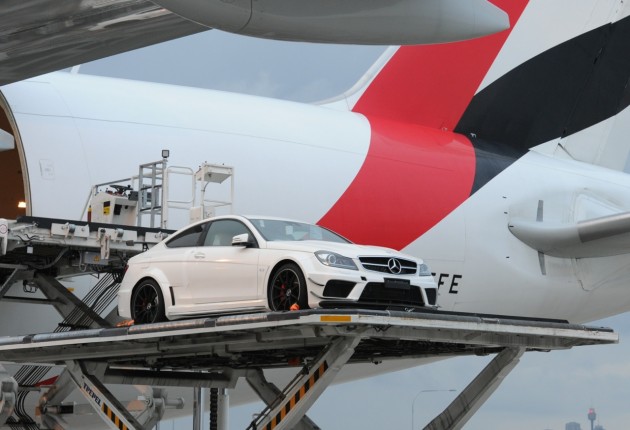 Fitted with the optional Aerodynamics Package, the Mercedes-Benz C 63 AMG Coupe Black Series looks like it comes straight from the DTM starting grid. There are carbon fibre front and rear spoilers, a chunky rear diffuser, pumped wheel arches, and even carbon side winglets for extra downforce.

Just 32 of these muscular C-Class Coupes are destined for Australia. Unfortunately, they have all been sold out already. Prices started at $245,000, with deliveries scheduled for April/May.

Since the local batch isn’t set to arrive for another month or two, Mercedes-Benz in Germany had to work hard to get this white example ready for our F1 GP. It was transported from AMG’s headquarters in Affalterbach to Frankfurt Airport, before arriving in Sydney earlier this week.

When optioned with sticky Dunlop Sport tyres, the AMG Black can power off from 0-100km/h in just 3.9 seconds. With the standard tyres, the dash is handled in 4.2 seconds.

Take a look through the gallery below tracing the AMG’s route from Affalterbach, where last-minute finishes touches were made, all the way to Sydney Airport.