Images of the Mercedes-Benz A 45 AMG have been released ahead of its 2013 Geneva Motor Show debut next month. Unfortunately, official specifications and engine data are yet to be confirmed. 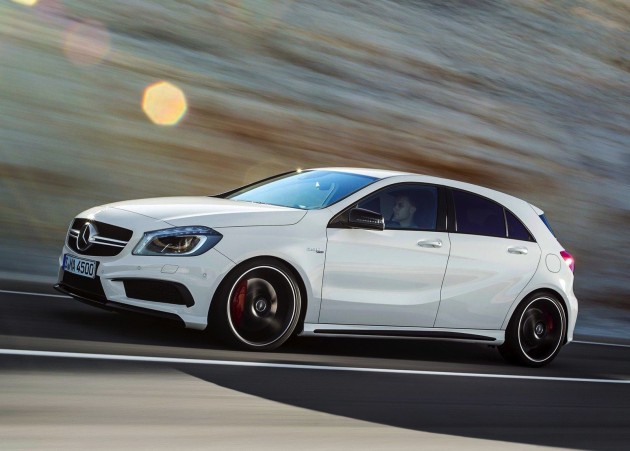 As far as we know, the A 45 AMG will come with a 2.0-litre turbocharged four-cylinder engine producing around 265kW of power and 450Nm of torque. The grunt is transferred through to a ‘4MATIC’ all-wheel drive system after going through a seven-speed dual-clutch auto transmission.

Performance figures are set to be mind-blowing, especially for a hatch, with 0-100km/h likely to be achieved in 4.6 seconds. It’s top speed will be electronically governed to 250km/h.

On the sensible side of things, the new A 45 is set to achieve an average fuel economy rating of just 6.9L/100km. It’s also set to pass Euro 6 emissions regulations, which will be put in place in 2015. 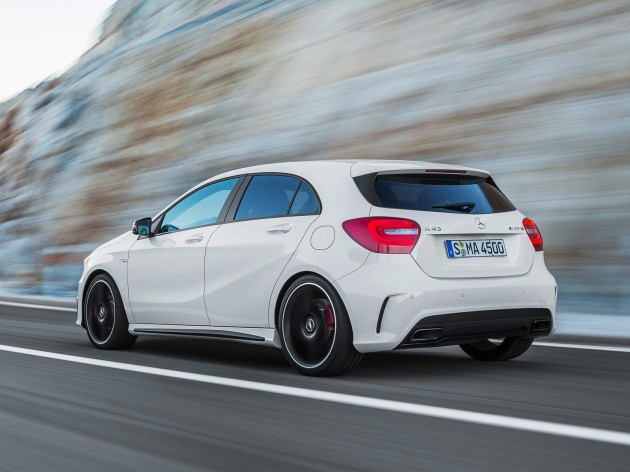 Like other AMG models, the A 45 will be just as dedicated and as serious. It will come with a bi-modal exhaust to let out a cracking bark, while the engine is a bespoke hand-built unit by AMG. The engine will also be the most powerful production four-cylinder in the world.

The mind-blowing performance won’t stop at straight line speed either, the little AMG will come with a comprehensive sports suspension system with different driving modes, as well as high performance brakes with multi-piston calipers. 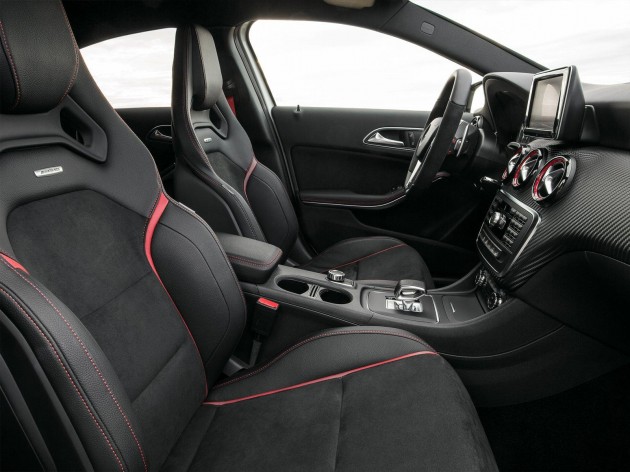 Inside, as you can see, the A 45 AMG is finished with a focused interior including sports bucket seats, a sporty three-spoke steering wheel, a carbon fibre dash, and plenty of red highlights such as stitching and the seat belts. It will also come with a comprehensive multimedia interface with a large LCD screen atop the dash.

On the outside, the super hot A-Class is easily distinguished via the aggressive bodykit, including a low and sharp front bumper bar, side skirts, and a fat rear end incorporating a large black diffuser with twin-outlet exhausts.

Production of the Mercedes-Benz A 45 AMG will commence in April, before hitting Australian showrooms in October. Prices are expected to fall beneath the $100,000 mark, like the previous BMW 1 Series M Coupe which retailed for $99,900.