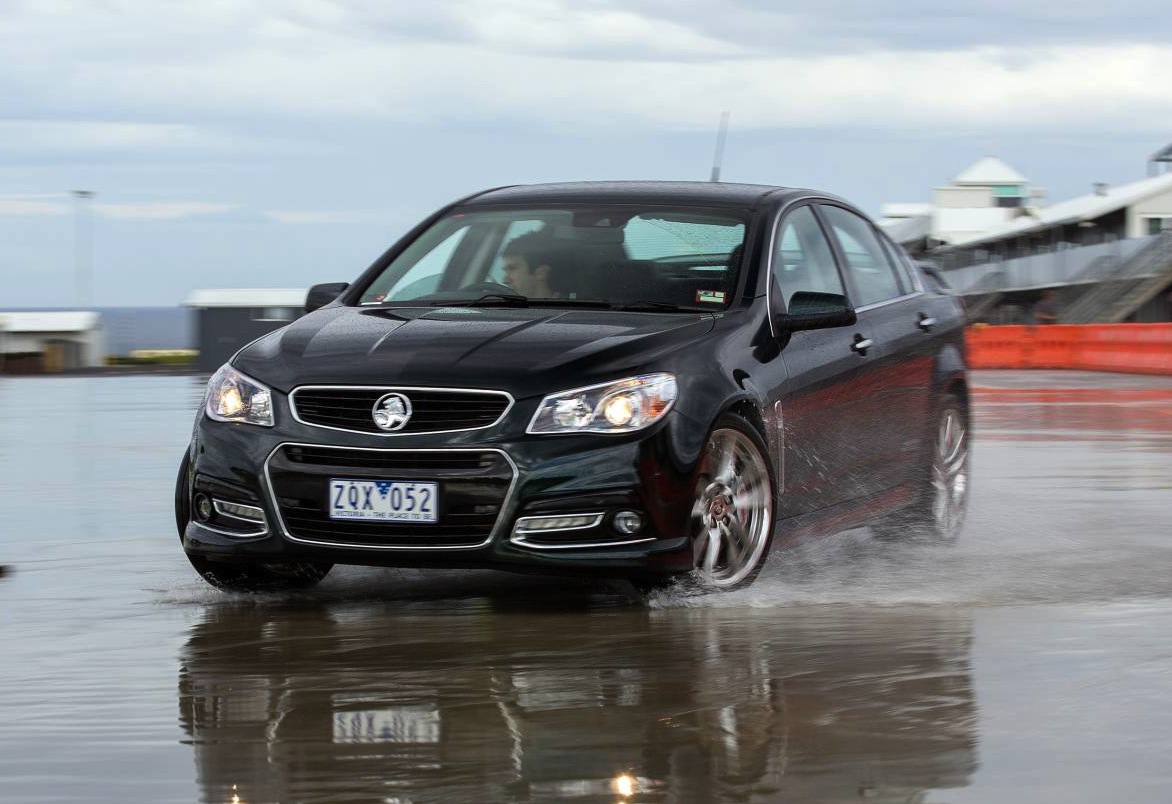 What better way to give the new 2014 Holden VF Commodore SS V Redline an official launch than by heading out to the pristine facilities at Phillip Island, international race circuit. There, we had a chance to explore some of the car’s impressive capabilities on the wet skid pan, a makeshift drag strip, and the circuit itself. 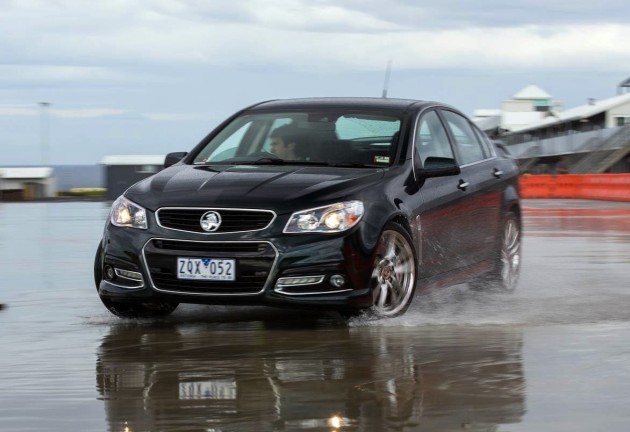 Holden says the VF Commodore has been really well received so far, with notable boosts in Commodore sales figures for its first month on the market. Holden sold 2144 Commodores during June, according to VFACTS statistics. And this is despite the VF only being on sale for a small portion of the month.

The Redline has been on sale since June as well, but there has been a bit of a waiting list on the Calais V and SS V models, including the Redline. Holden says supply is now starting to free up. 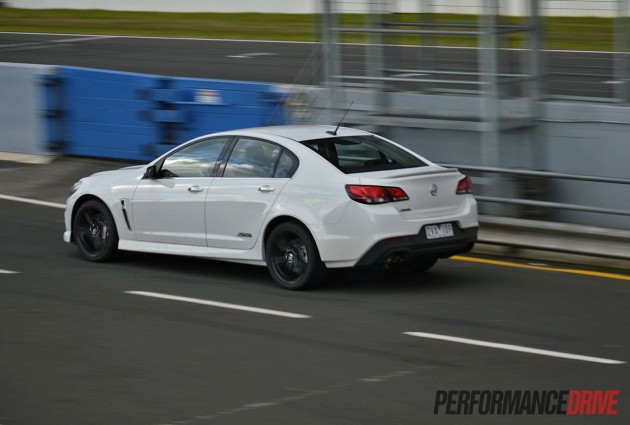 So what’s different about the new VF Redline over the VE? Well, it is more of a bespoke model this time around, separated from the sporty SV6, SS, and SS V variants.

It’s quicker and more focused than its predecessor too, and it’s more suitable to take to the track. It’s also more advanced with some interesting new technologies coming in, giving it a stronger standpoint in this segment and price range.

The VF Redline comes with a number of Commodore firsts, including a staggered tyre size (245s on the front and 275s on the rear), launch control, forged alloy wheels to reduce unsprung mass, a ‘Competitive Mode’ for the steering and stability control with a unique steering calibration to any other VF, and a beefed up Brembo braking package which features a revised master cylinder compared with the VE Redline.

From 100-0km/h, the VE is able to stop in 40.9 metres, while the VF, with its newer setup, is able to pull up to rest in 38.6 metres. In the corners, the VE Redline manages 0.88g in lateral force, while the VF manages 0.93g. These are some decent measurable improvements, and proof that the engineers have been putting in the hard yards.

As a result, no Commodore has ever been developed with such attention to detail. To cement it all in and to give the Redline its final industry seal of approval, the ute version has set a new world record around the famously punishing and demanding Nurburgring in Germany.

A production-mimicking version lapped the course quicker than any other factory utility/commercial vehicle in history (according to Holden). With a crew of just three engineers, the team posted a time of 8:19.47, which is a few seconds quicker than an R32 Nissan Skyline GT-R, and just a few seconds short of a 2009 Porsche Cayman S. 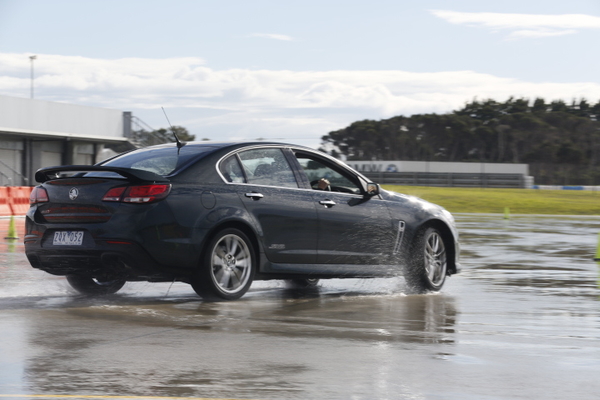 For the tests at Phillip Island, Holden insisted that we start out by having a go on the wet skid pan. This gave us a chance to test the Competitive mode (selectable via two pushes of the ESP button) on a gymkhana course which had been laid out for us. In this setting, the all-new electric steering calibrating is fine-tuned for a more sporty feel. The stability and traction control is also slackened off so it intervenes much later.

Even on the very slippery, polished wet concrete, the VF shows good grip and a playful amount of slip. Drifting is possible in Competitive mode, allowing you to build up and maintain an enjoyable drift at a reasonable angle – Holden engineers told us the stability control will only step in when it thinks the point of no return is approaching.

The new tyres contribute to the improved grip levels quite a lot. Although understeer and oversteer is very existent in these tricky conditions, it’s the response and the continued grip that is most noticeable. In other words, all is not over if you break traction; the car remains controllable and predictable during slip.

Through the wheel, the steering feels nicely weighted, relatively precise, with a good amount of feedback. The changes between normal and competitive modes are noticeable, mainly in weight differences. 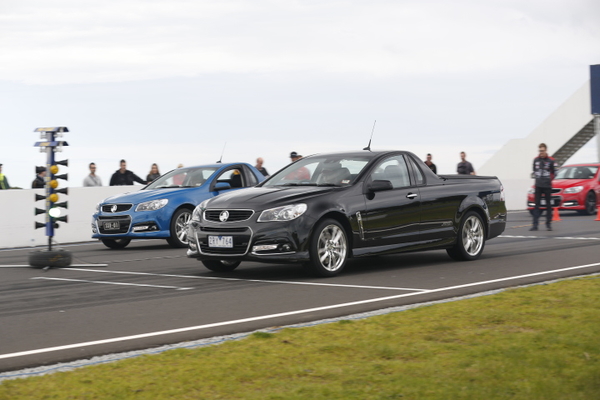 Outright horsepower and traction rule the kingdom on the drag strip. For the SS V Redline, the power comes from the 6.0-litre naturally aspirated V8 carried over from the VE, churning out 270kW (auto 260kW) and 530Nm (auto 517Nm). It feels strong and torquey.

Those looking at opting for the six-speed manual needn’t worry about a heavy clutch or needing the muscles of Arnold to throw the lever. It’s a relatively light setup.

The clutch peddle does feel a bit like you’re stepping in something that fell from the back of a cow, but there’s no questioning it’s performance; on regular occasions, the clutch will spit out wheelspin well through second gear, with a distinct chirp into third and even fourth gear if you try hard enough.

Speaking of trying hard enough, we did our best over the 1/8 of a mile strip. The main area that held us back somewhat was going from second to third. The gear lever throw is a little notchy. This may have been due to the repeated abuse it was getting on the day, and you can get used to it.

Using the launch control system makes getting off the line a cinch. In Competitive mode, simply nail the throttle to the floor with the clutch depressed. The revs will climb to around 4000rpm, then side-step the clutch. It’s that easy. The rest is handled for you as you prepare to slot home second gear.

We tried varying degrees of aggressiveness during our runs, including flat-changing into second – which causes wheelspin followed by a big slingshot effect, throwing you forward – as well as more smoother changes. The best time we could manage was an 8.987-second pass at 131.2km/h. 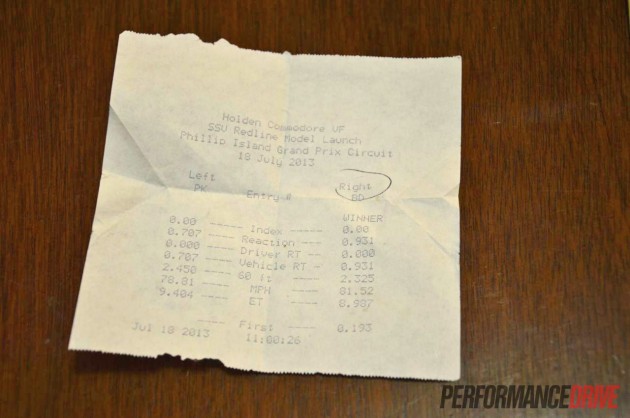 Holden recommended that we all leave the traction and stability systems turned on during the track laps. However, potential flaws in handling can hide under the blanket of such electronics, so we switched the systems completely off for the duration of our laps.

Unfortunately, due to limited time, we were all given just a handful of laps to sample the car. In this time we did get a bit of an understanding of the chassis behaviours, brakes, and gearbox. (You’ll have to excuse our driving in the video below as we tried to evaluate the vehicle as well as provide you with some enjoyable and interpretable footage.)

The big VF is placid and pretty soft out on the track. The more hardcore enthusiasts out there will probably look into getting some firmer springs and tighter dampers. It certainly doesn’t stop you from having fun though. In fact, the handing nature is very friendly and forgiving. You can get on the power well before the apex of a corner and hold a controllable slide right out to the corner exit. And you could probably do this while sipping a cup of coffee if you wanted to. It’s that easygoing.

On the flip side, if you’re too hot coming into a corner, mild understeer is the only issue you might run into. In these situations, the Brembo brakes provide substantial bite, and with that soft-ish spring rate – and no anti-dive mechanism – weight can be shifted onto the nose for increased road holding. The benefit of this setup is on-road comfort is not compromised.

As for the Brembo brakes, they perform very well under the strenuous conditions of a track. We faced no issues with fade or overheating during our test, repeatedly pulling up from 170-180km/h.

One area that could be improve is the brake pedal position. It sits high. For those who like to heel and toe while downchanging through the gears, you will need to roll your ankle to get it right. It’s completely possible and you can get used to it. The pedal does depress quite a bit too, so the harder you brake, the easier it is.

In terms of grunt, the mighty V8 offers plenty. On most corners at Phillip Island, the wide span of torque is able to pull third gear with decent shove, while second gear is able to pull you out from very slow corners. It’s not the nicest-sounding V8 from within the cabin, it sounds fairly mute and muffled, but it does give off a belching growl from outside. 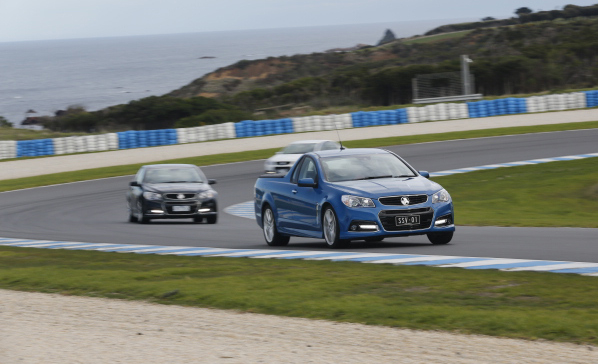 Holden has done an excellent job with the VF, successfully turning the Commodore into a proper premium product – as previously suggested in the original launch review. And with the Redline, its identity and focus is clearer than ever.

It’s one of the most approachable yet manageable performance sedans on the market in our view, and with a starting price of just $51,490, it’s an incredible bargain. Enthusiasts will no doubt swarm to dealers over this one, and reap in the back-for-your-buck benefits.

PerformanceDrive will be reviewing the SS V Redline in our usual format, more comprehensively (including our engine sound and 0-100km/h video) in September. Stay tuned for more.