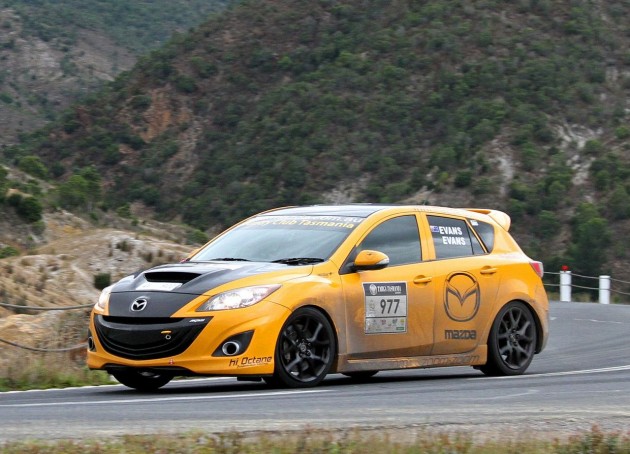 The Mazda3 MPS used in the rally is pretty much to showroom specification, albeit with some tweaks to the suspension and safety systems. From the factory it comes with a 2.3-litre turbocharged four-cylinder engine producing 190kW and 380Nm.

Taking out the outright victory for the 2012 Targa Tasmania was Jason White and co-driver John White in their Lamborghini Gallardo. This is the team’s second Targa win in three years.

White also pushed the Gallardo through to a Targa High Country and Targa Wrest Point win, giving the team an overall 2012 Targa Championship title. (You may remember the Lamborghini Gallardo last year finishing the Targa High Country event on fire.)

Coming in at second place overall was last year’s winner, Tony Quinn and his Nissan GT-R R35. Quinn finished just two minutes and 27 seconds behind White in the Gallardo. And rounding out the top three was ‘Gentleman Jim’ Richards and his Porsche 911 GT2 RS.