A production version of the stunning Lexus LF-LC could be on its way as Lexus tries to claw back sales and regain top position as USA’s most popular premium marque. 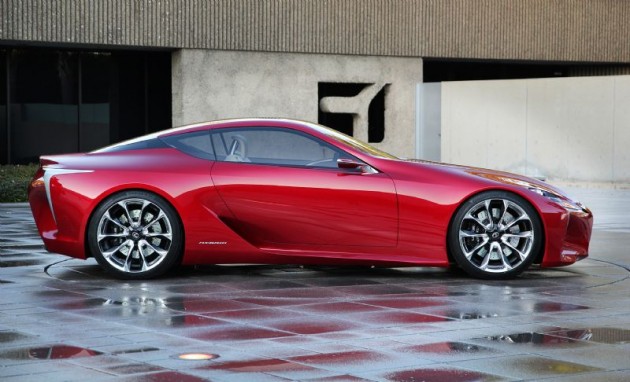 Last year, BMW and Mercedes-Benz overtook Lexus (in that order) for top position in terms of annual sales. Lexus sold 198,552 vehicles in the country. This year Lexus plans to shift 240,000 vehicles out of the showrooms. Lexus general manager Mark Templin said in a recent Automotive News report,

“We will grow more than any other luxury brand this year. Our base plan is 240,000. But we think we can exceed that by a pretty good margin.”

To bolster the brand’s appeal, Lexus is set to release nine new or updated models this year, including new variants of the Lexus CT 200h (with rumours of a CT 250h/300h), a new seven-seat crossover, the new GS 350 and GS 450h, and a number of F Sport variants. The company is also set to release an updated version of the Lexus IS, ES, and flagship LS, all at least in America.

The most interesting addition of the newcomers though is of course a production version of the Lexus LF-LC that recently debuted at the 2012 North American International Auto Show in Detroit. Nothing has been officially confirmed just yet, but according the report Lexus executives have mentioned a possible price tag of around US$100,000-$130,000 for the vehicle.

Executives say there is also room for a sporty new coupe, inspired by the concept, to slot underneath the LF-LC as a successor to the Lexus SC 430 which went out of production in 2010.

This could mean the production version of the LF-LC could enter the market above the $200,000 mark, while the SC 430 replacement could take on a similar price bracket as the old SC 430, which retailed for AU$165,000.

As for the Australian lineup this year, Lexus will introduce the new Lexus GS range – including the GS 250, GS 350, and GS 450h – during the second quarter of this year. A new CT 200h variant is also on the cards (possibly the same CT 250h/300h mentioned above), and a revised/facelifted RX SUV.