Red Bull Racing has had its first one-two finish for the 2013 Formula One season, with Sebastian Vettel passing Australian teammate Mark Webber late in the race to steal the win at the Malaysian Grand Prix. 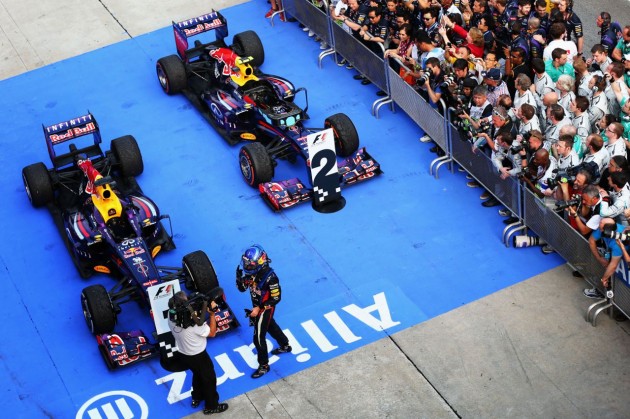 After a dismal start from the front row the previous week at the Australian Grand Prix, Mark Webber went on a charge from row three when the lights went out at a soggy Kuala Lumpur circuit. By the end of the lap, he was second behind his world champion teammate.

Just several laps later, Webber stayed out for an extra lap on the intermediate tyres and found himself in front of Vettel when he came back out of the pits.

The Australian led for 44 of the 56 laps before Vettel had the last laugh, passing him on softer tyres in an intense battle. The two Red Bulls came within inches of each other, but the German got out in front and went on to take victory by about four seconds. 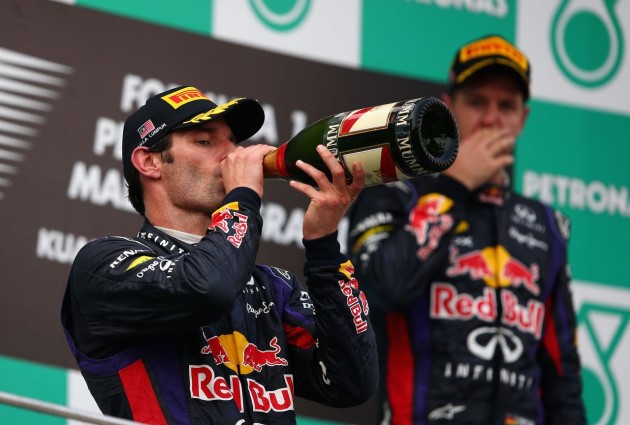 Webber was notably unhappy with finishing second and said the team had told he and Vettel before the race that they were to conserve and hold their position in the closing stages of the race.

“The team told me the race was over,” Webber said on the podium. “The team made a decision… I turned my engine down and started cruising, then all of a sudden the battle was on. I was disappointed with the way things went.”

Vettel said he expected to get a talking to from his team after not following team orders.

“I think I was a little too keen too soon,” Vettel said. “I enjoyed the fight and had the upper hand in the end. Mark was always a little bit ahead, I got stuck in traffic. I think it’s obviously very hot today, if there’s something to say we need to talk internaly. I think we have plenty to talk about.”

Massa’s teammate Fernando Alonso’s race only lasted just over one lap with the Spaniard paying the price for not pitting with front wing damage he suffered on the first few turns.

Australian Toro Rosso driver Daniel Ricciardo had his second DNF in seven days after hovering around just outside of the top 10 for most of the race. His teammate Jean Eric-Vergne snared a point after finishing 10th.