The second of four Hyundai ‘SR’ concept cars has been revealed at the 2012 Australian International Motor Show. Called the Hyundai Veloster SR Street Car Concept, the one-off hot hatch is a joint project between Concord Customs and Hyundai, featuring a number of performance modifications inside and out. 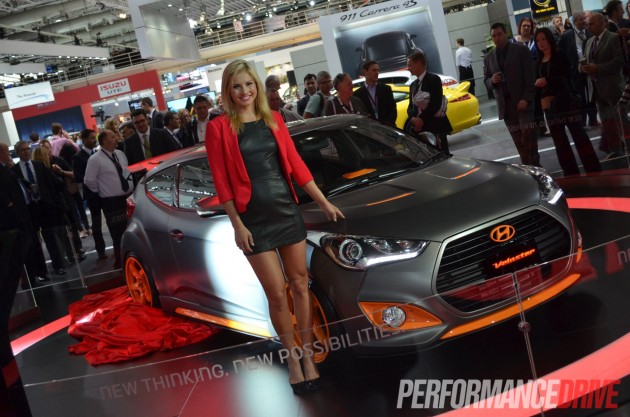 Performance-wise, the Street Concept features a modified version of the standard 1.6-litre turbocharged four-cylinder engine. From the factory, the unit produces 150kW and 265Nm.

Concord Customs has fitted a custom intercooler, a stainless steel intake system, Monza blow off valve and pod filter, and a free-flowing three-inch XForce exhaust system. Power figures for the modified Veloster Street Concept have not been announced.

The Veloster Street sits much lower than the standard car thanks to NGM Beta-Max coilover suspension. Also added is a top stop front strut bar, uprated front and rear sway bars, and Super Pro suspension bushes. The stock SR Turbo rims are replaced by a set of 18 x 8.5-inch Tenso R V1 alloy wheels with plus 32 offsets, wrapped in 215/40 tyres.

The Street Concept has received the full treatment in the audio department too. Some of the standout features include two subwoofers enclosed in a custom enclosure, two amplifiers, and more speakers than a movie theatre. The end result could no doubt give you a proper ear bashing.

“The Veloster offers the ideal platform for aftermarket interpretation and personalisation, and provides the opportunity to demonstrate the full potential of this affordable sports model.

“Street Concept is an excellent example of the versatility of the brand and the potential for Hyundai to reach a broader audience.”