After famously quitting V8 Supercars at the end of the 2012 season, Shane van Gisbergen has become the first driver to score pole position in the Car of the Future era after setting the fastest time in the top 10 shootout in the Clipsal 500 in Adelaide today. 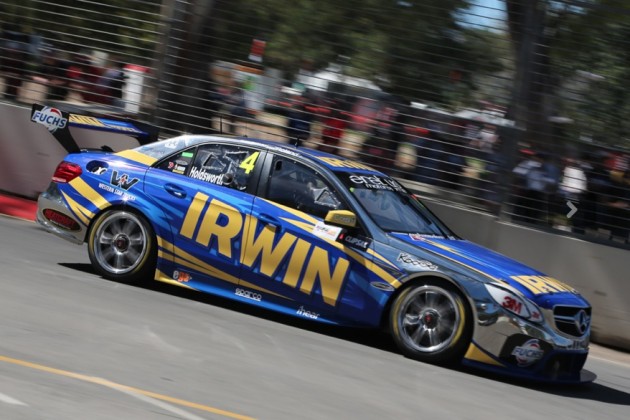 The Tekno Autosports Holden Commodore driver amazingly set a time earlier in qualifying less than 0.0001 (that’s one ten-thousandth!) seconds off the session’s quickest man Craig Lowndes. Lowndes could only manage third fastest in the shootout with Ford Performance Racing’s Mark Winterbottom jumping from eighth in qualifying.

“My phone’s broken so I haven’t read any media at all, it’s been great, so I’m just going out and doing it.”

Brad Jones Racing’s Fabian Coulthard will start from fourth while van Gisbergen’s teammate and Tekno owner Jonathan Webb will start on the third row along with reigning champion Jamie Whincup.

It wasn’t the best of starts to the season for the new Mercedes-Benz team Erebus Motorsport with drivers Lee Holdsworth, Tim Slade and Maro Engel qualifying down in 23rd, 24th and 28th (last of the field), respectively. Engel crashed out after just five laps slipping on his own oil spill.

The other newcomers Nissan performed much better than the German rivals with Norton 360 drivers Michael Caruso and James Moffat finishing 13th and 14th respectively while Jack Daniels Racing’s Todd and Rick Kelly could only manage 17th and 19th.