Up for sale on eBay at the moment is a Ferrari Enzo FXX Evolution. Just 30 of these strict race-car-only FXX models were ever made, and only 17 of them in this Evolution guise. 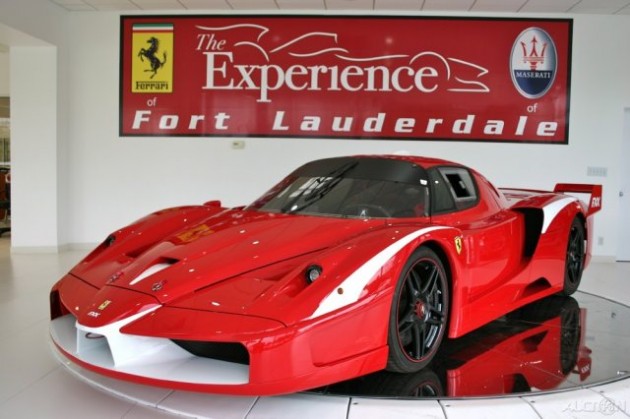 Finding a Ferrari Enzo up for sale is pretty hard to come by, especially as to buy one of these stunning supercars, Ferrari had to pre-select you personally before you could by one. Only 400 were ever made, which makes finding a second-hander for sale even more unlikely.

However, a very special Ferrari Enzo FXX Evolution has just been spotted on eBay for sale. Not only is it one of 17, it’s also in complete mint condition with just 11km (seven miles) on the clock. This means the FXX has hardly moved. Just being carted around from factory and garage on a trailer could have racked up the kilometres.

According to the owner and the eBay ad, the Ferrari Enzo FXX for sale was upgraded to Evolution specifications in 2010 by Ferrari’s Corse Clienti department. Upgrades include revisions to the transmission which allows for shift times in well under 100 milliseconds, as well as uprated brake pads clamping carbon fiber-reinforced silicon carbide (C/SiC) ceramic composite discs.

Other features include an on-board data-monitoring and telemetry system allowing the driver to check and improve track performance. The data also provides Ferrari technicians with feedback to improve the FXX and future Ferrari road cars.

The lucky buyer of this Ferrari Enzo FXX Evolution won’t just get access to possibly the most ferocious Ferrari model ever made, but also exclusive Ferrari track days and technical support from official Ferrari technicians. The Ferrari Enzo FXX will also be completely maintained by Ferrari.

At the time of writing this there were no bids on the Enzo FXX. Bids start at US$1.5 million with a reserve. We suspect the reserve could be set to $1.8 million as further down in the ad description it says “customers pay $1.8 million”. Follow this eBay link to see the complete ad. The auction ends in just over two days.