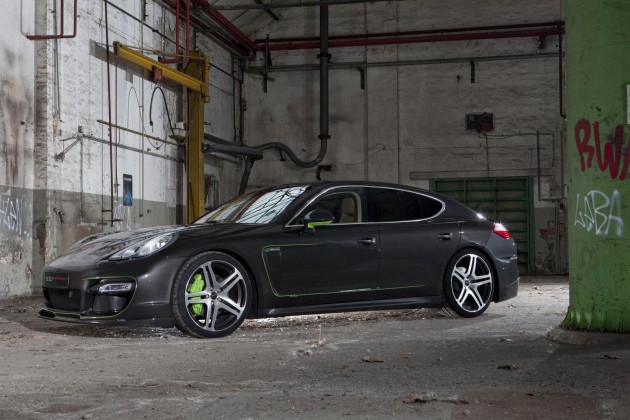 The Edo Competition Porsche Panamera S Hellboy pack is not simply about outright power, or indeed focusing on any one true element. It’s got just as much attention poured into the interior as the exterior, while under the bonnet has been bolstered nicely to balance it all out.

Meanwhile, under the bonnet, the standard 4.8-litre naturally aspirated Panamera S V8 engine receives a pair of freer flowing air filters and a re-tuned engine computer taking output levels from the standard 294kW and 500Nm, to a healthy 343kW and 550Nm.

Now, we’re not overly enthusiastic about extravagant bodykits here at PD, but kits are all part of the overall motoring experience. With kits that are developed with fine attention to detail, like this full carbon fibre Vorsteiner Panamera kit, credit has to be given.

The entire Edo Competition Porsche Panamera S Hellboy pack goes for a dark grey/black theme matched with green highlights, which, is maybe not to everyone’s taste. Overall though, it’s quite a thorough package wouldn’t you say?