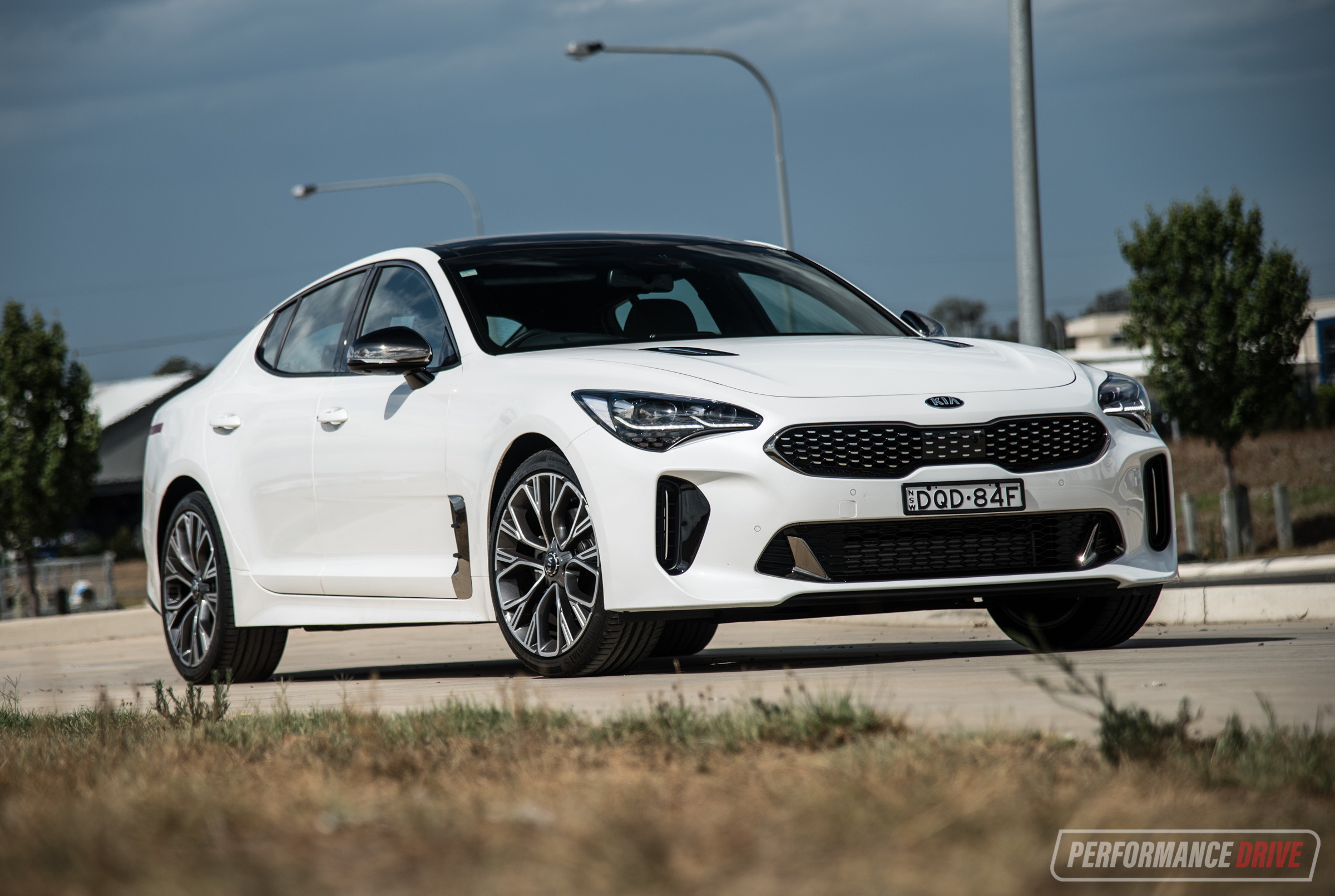 Kia is not usually the brand that comes to mind when you think of large rear-wheel drive family sedans. With the departure of the locally built Falcon and Commodore, Kia has jumped on the opportunity to fill the open window. Its rendition comes in the form of the Kia Stinger, but adding a side plate of sportiness. 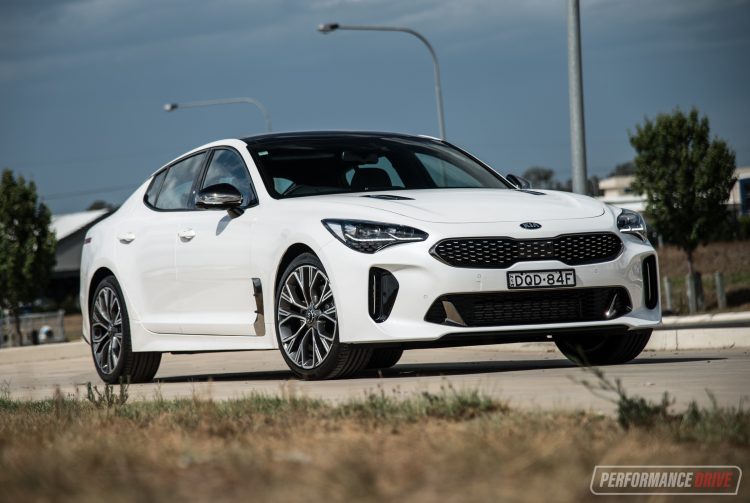 There are two petrol engines to choose from; a 2.0-litre turbo four-cylinder tested here, which produces a generous 182kW of power and 353Nm of torque. The ripper engine is a 3.3-litre twin-turbo V6, which outputs a mouth-watering 272kW and 510Nm. You can read our full review on the Stinger V6 here.

The range commences with the S, then the Si, and at the top the GT-Line (or just GT with the V6). All variants are available with both engines and the same eight-speed automatic transmission. Our test car is the GT-Line. Pricing starts at $55,990, and the cheapest model kicks off from $45,990 (plus on-road costs).

The Stinger GT’s closest rival is probably the Lexus IS 350 or the Infiniti Q50 if you compare rear-wheel drives, which are both at least 10k more. And both were not used as major sponsors for the Australian Open tennis as part of a huge marketing campaign, amplified with the launch of a special edition. 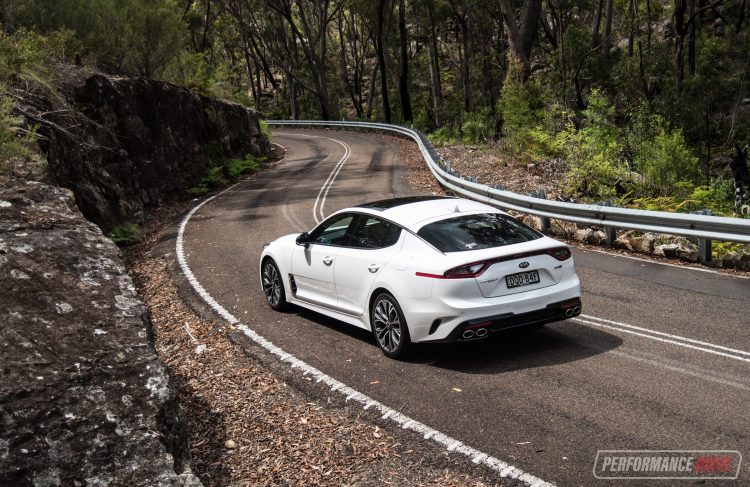 $56k might sound like a lot of dosh for a family sedan, but it is everything but standard or boring. And it shows in the feature list. The GT-Line is fitted with a brute 15-speaker sound system with, not one but two sub-woofers, digital DAB+ radio, all controlled by an 8.0-inch touch-screen with Apple CarPlay and Android Auto connectivity. Embossed leather seating with heated and ventilated front seats, sunroof, active-bending and auto-dipping high-beam headlights, head-up display, front and rear parking sensors, adaptive cruise control, rear cross-traffic alert, lane keeping assist, collision mitigation, and much more, are all standard. In fact, the only item that we can think is missing here is semi-auto parking.

When you first lay your eyes on the Stinger you wouldn’t think it was made by Kia. That’s because the South Korean brand poached the design engineer from Audi a few years ago to help re-face the brand. The front end and rather long bonnet gives off a sharp and athletic stance. At the rear you will notice the profile integrates a spoiler, which gives off a dark-shadowed, mysterious vibe into the rear lights. Technically, it could be labelled as a hatchback as the rear window lifts with the boot. Either way, it looks well-proportioned and the rear gradually slopes down from the front to create the aerodynamics of a fast-moving water droplet. 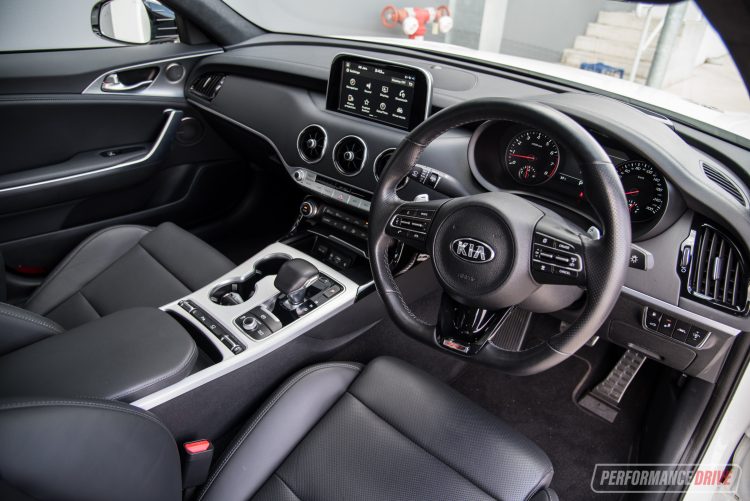 The interior steers away from that athletic visual appeal, leaning more towards elegance and cleanliness. The feel and finish, again, is not something you’d expect from Kia. From the suede feel roof lining and pillars to the neat and clear instrument cluster, the interior is a real winner. The touch-screen is also responsive and simple to use, although, it would be nice if it were located slightly closer to reach.

The GT-embossed seats are nicely bucketed to provide extra leaning support around corners, yet there’s myriad ways to customise the position. Naturally, the car sits low to the ground but it can make it challenging for bigger passengers to enter and exit, as you do have to crouch down and climb up, respectively. But once you’re in, there’s vast amounts of room in the cabin. Even in the rear, taller passengers’ knees won’t be impeded by the front front seats.

For those worried about boot space, the Stinger measures in at 406 litres, which isn’t huge. But, there is a large load floor with the window raising with the boot providing a big opening. Lowering the rear seats will open it up to 1114 litres. 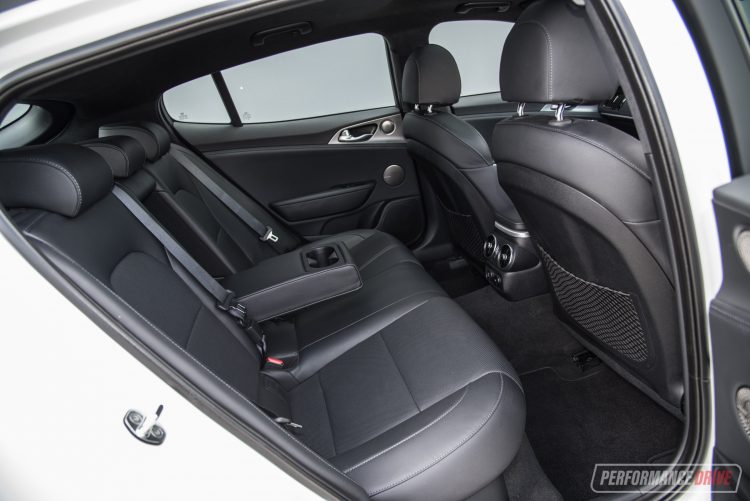 Yes, we know this four-cylinder engine is the lower-spec choice of the two, but it’s still worthy of praise. With 182kW on tap and 353Nm kicking in at only 1400rpm, your need for gaining speed quickly from 0-100 or 60-100 will be easily met. The official 0-100 sprint is timed at 6 seconds (we clocked it in 7.89 in warm conditions), which is only 1.1 seconds slower than the twin turbo V6. And that push from the rear wheels is what we love. Flick it over to sport mode and the traction control will become less intrusive to get that rear end wiggling.

Speaking of driving modes, each one significantly alters the suspension attributes more than you might expect. In normal mode it’s a comfortable but slightly tense and sporty ride. It is an effortless cruiser in this mode, eating up mile after mile on the motorway in quiet, smooth-cruising comfort. The engine and driveline is also hush and feels very refined.

In sport mode the suspension tightens to a level that almost makes it feel like a different car. Even driving along a relatively smooth road the MacPherson strut front suspension and the multi-link setup on the rear will have beer guts bouncing up and down like jelly. And that’s perfect for holding all the way through a fast corner, but probably a tad harsh for ordinary to poor roads. 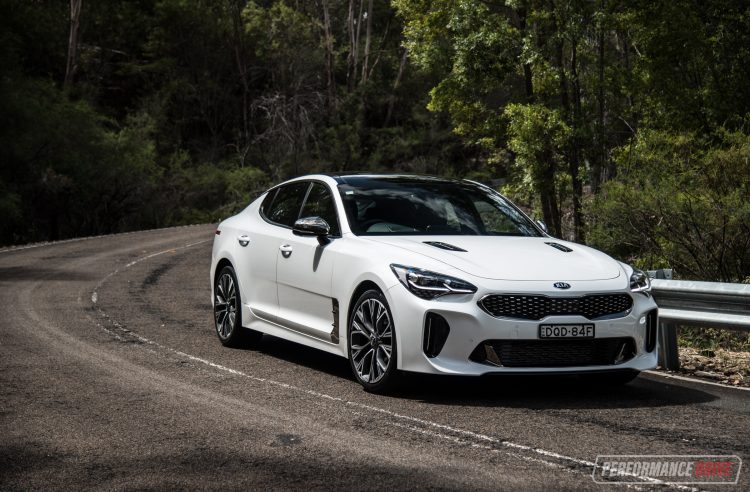 The Continental ContiSport Contact 5 tyres provide epic amounts of grip. It’s one of those cars that you can throw into the turns and it will brace positively. It’s not as playful as the German rivals or the more powerful V6, but it does alright given it weighs in at a fairly steep 1693kg (tare).

The eight-speed automatic transmission, which is engineered by Kia, could be terser and less delayed at take-off in sports mode, but it does provide a smoothness that will appeal to a wider customer base. Using the paddle shifters for manual-like driving adds a further element of fun and interaction.

Brembo brakes are only fitted to the twin-turbo V6 models to cope with that extra 90kW of power. Don’t worry though, the brakes fitted to the GT-Line are still capable of pulling up on a dime without much fade, even after repeated abuse. 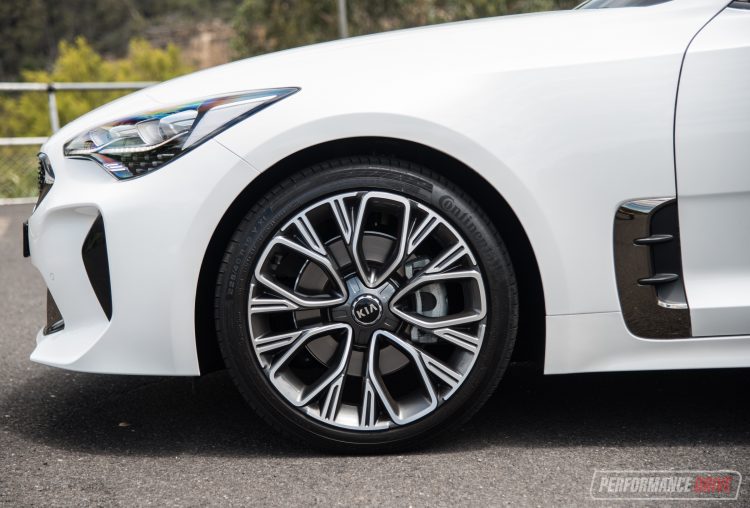 Fuel economy is not the most important attribute to the Stinger, but official figures rate it at 8.8L/100km on the combined cycle. Our testing revealed more like 9.3L/100km. But it will run on the lowest grade of petrol (91 RON), including E10.

The safety and assistance systems on the road are an added bonus to a vehicle that doesn’t just orient itself to being sporty – this is a great novated lease or company car option in 2.0T form. The 360-degree camera works great for the long car that it is, and the handy head-up display is fully customisable in height, brightness, and content displayed. The radar cruise control is not the most refined on the market, but hey, at least it exists; and it makes long-distance driving just that little bit more relaxing.

It is evident that Kia has put a lot of resources into designing and developing the Stinger. We’re not even sure people will know what they’re looking at when they see one on the streets, let alone know the level of engineering that’s gone in. But, from an owner’s perspective, you get a huge list of standard features, a sophisticated interior, an exterior design that really stands out in the class, and an enjoyable and well-trained rear-wheel drive platform. And all of this without the expense of the prestigious rivals that offer a similar proposition.

Maybe our standards are set higher with Euro-branded vehicles, but if you’re still not convinced, Kia offers an incredible seven-year/unlimited kilometre warranty. The trickiest part is not losing to temptation for the twin-turbo V6 version, which is only $4k more for the top GT.

PROS:
– About the only RWD offering on the market with this much grunt for the price
– Interior quality and feel
– Feature list, value for money
– Kia’s 7-year, unlimited kilometre warranty gives assurance of reliability doubts

CONS:
– Assistance systems could be more refined
– Low to the ground/strain getting in and out
– GT-Line priced too closely to V6