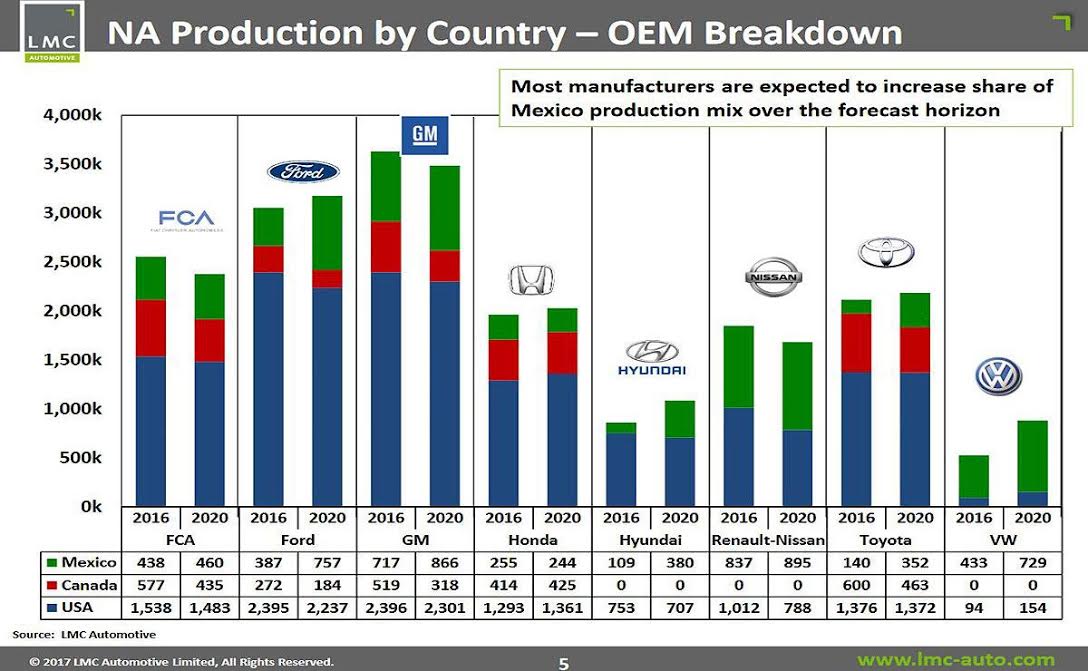 Manufacturers will continue to invest in Mexican production, despite public threats from US president Donald Trump, according to a recent study. 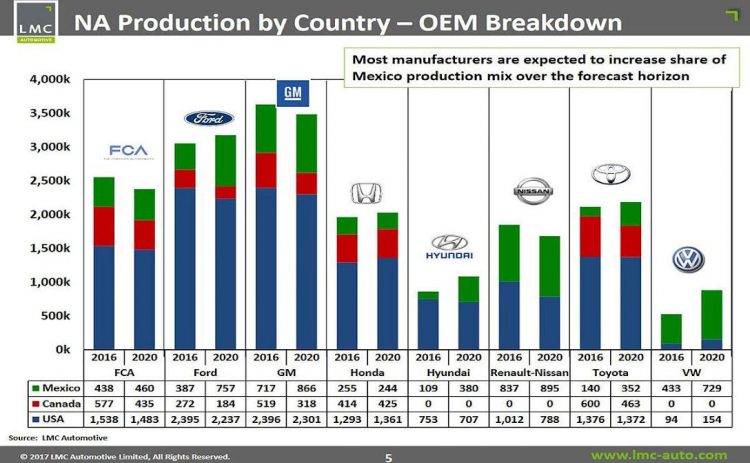 The study in question was formulated by LMC Automotive, who released its forecast model for vehicle output of eight major manufacturers, split between the U.S.A, Canada and Mexico.

Detroit’s big-three manufacturers, Ford, GM and Fiat-Chrysler are all expected to increase production of their vehicles in Mexico, while construction in Canada and the U.S. will fall, despite recent investment announcements that would suggest they are increasing. Of the Detroit 3, Ford’s outsourcing to Mexico is expected to see the greatest rise, from 387,000 units this year, up to 757,000 units in 2020; around 10 per cent up to the 20 per cent mark.

“The U.S. currently accounts for two-thirds of North American vehicle production but significant investment plans and decisions to re-source capacity from Asia and Europe to Mexico are expected to bring Mexican production from 19 percent of NAFTA today to 26 percent in 2020,” the study said.

NAFTA, or the North American Free Trade Agreement is, according to Trump, very much negotiable, as Trump has signaled previously his intention to slap vehicles imported from Mexico with a 35 per cent tariff. The study went on to say:

“The potential for penalty on vehicles manufactured within NAFTA but outside the US may impact existing vehicle sourcing and future [North America] production mix and vehicle decisions, many of which are already in process.

“Until specific policy is detailed, the environment is fluid and uncertainty remains high, as the industry plans for the future. Aversion to policy risk, and to the threat of negative publicity, has become a significant consideration for planners.”

Taking a look at LMC’s predictions shows that Hyundai, Toyota and Volkswagen will ramp up the number of vehicles produced in Mexico quite significantly by the year 2020; Volkswagen for instance is expected to increase the figure from 433,000 units to 729,000 units by the turn of the decade.

“This appears to be the direct result of pressure from Trump holding to his campaign promise of penalising companies for manufacturing outside the U.S. However, many of these decisions were already planned or were altered due to other factors, such as lower demand for small vehicles or shifting higher margin or complex vehicles to the US, and not solely the result of the pressure.”