BMW has revealed details about its range of BMW M Performance accessories which will become available on the BMW 1 Series hatch, the new BMW 3 Series and the BMW 5 Series. 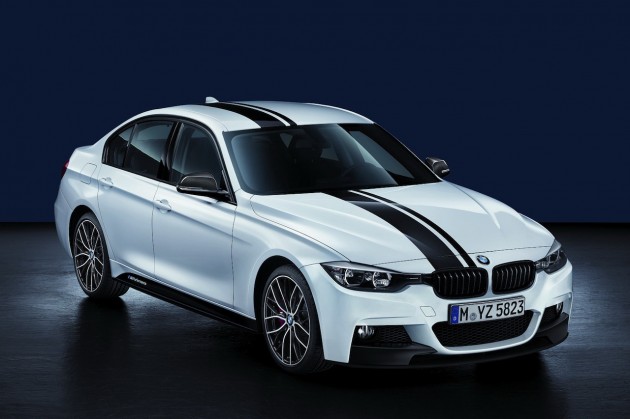 The range of products includes styling and trimming upgrades, sporty suspension setups, and interior highlights. There’s also a selection of engine and mechanical upgrades on offer, including exhaust systems, uprated brakes, and ECU revisions for the ’20d’ variants to boost power by 12kW.

As you can see on the 2012 BMW 3 Series above, the M Performance accessories do provide a decent aggressive touch. The full M Performance pack for the 3 Series includes a distinct black and white theme with a carbon front spoiler, black grilles, carbon fibre side mirrors, black side skirts, and a set of black stripes over the entire car.

Inside, options include stainless steel pedals and gear shifter, a sports steering wheel with a ‘Race Display’, and plenty of Alcantara trimmings. The complete package is topped off by a set of optional 19- or 20-inch two-tone alloy wheels.

Overall, it’s promising to be a smart way to personalise your car without ruining the factory warranty. Doesn’t look half bad, what do you think?

The accessories will go on sale in Europe later this year, followed by other markets around the world. BMW Australia is considering bringing in the power pack options, while most of the other accessories will be released locally some time around June-July.