BMW Australia is introducing the new BMW 520i and BMW 528i, both featuring different forms of the new N20 2.0-litre TwinPower turbo four-cylinder engine. 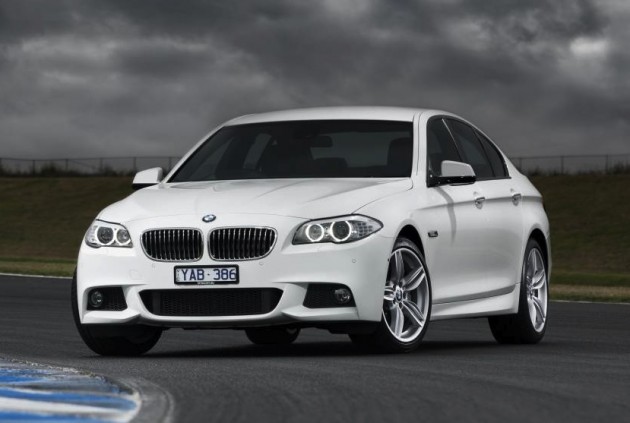 Like the upcoming F30 2012 BMW 3 Series BMW 320i, the new entry-level BMW 520i will feature a slightly de-tuned version of the 2.0-litre TwinPower four-cylinder petrol engine.

It may not be a outright barnstormer of an engine but it does develop a healthy 135kW of power and 270Nm of torque available from 1700rpm up to 4000rpm. This will undercut the current entry-level BMW 5 Series variant, the BMW 520d turbo-diesel, to be the new base-model 5er.

Another major change to the new BMW 5 Series range in Australia is the introduction of the new BMW 528i. The current/predecessor BMW 528i features the somewhat aged 3.0-litre naturally aspirated straight six engine. It now gets the full-cream N20 2.0-litre TwinPower turbo four-cylinder.

Like the new BMW Z4 sDrive28i announced last month, the new BMW 528i offers 180kW of power and 350Nm – down 10kW, but up 40Nm. A reduction in power is generally a bad thing in our books but in some circumstances, it can be for the greater good.

The addition of 40Nm will help pick the new BMW 528i up and spit it out of corners and motivate things during take off, as well as help keep the engine in its optimum powerband when driven with enthusiasm. Another upshot of the new engine is of course, a reduction in fuel consumption.

Other interesting performance changes for the new BMW 5 Series range include a power hike for the BMW 535d, which features a 3.0-litre TwinPower turbo-diesel. Power is boost up from 220kW to 230kW thanks to slight engine revisions. It’s now capable of sprinting from 0-100km/h in 5.5 seconds, compared with 5.7 of the old – incredible performance for a diesel. Fuel consumption is also reduced from 5.7L/100km to 5.6.

Just about all new BMW 5 Series models have received a price cut, and come with additional extras on some variants. Pricing and the changes are as follows (MLP, without taxes etc.):

The new BMW 520i and BMW 528i will arrive in Australian showrooms starting from November this year.