Red Bull Racing has taken one of its show F1 cars for a drive along the Khardung La pass in the Himalayas, known as the highest road in the world. The road is said to sit 5602 metres above sea level. 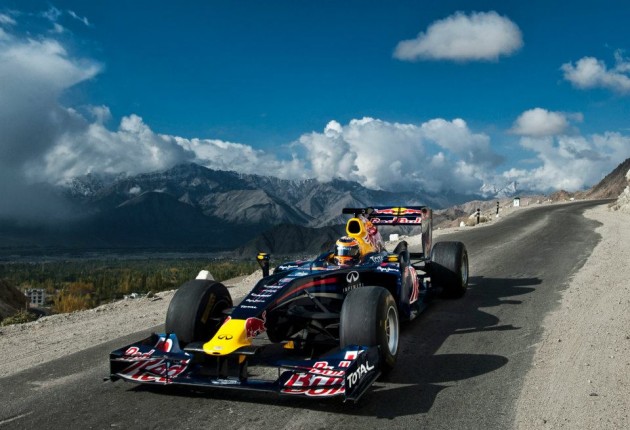 The Red Bull F1 team really is venturing out when it comes to attracting publicity, after last month it told ex-racer David Coulthard to do donuts in the dirt in an F1 car at the Circuit of the Americas unfinished F1 track, and then again.

Red Bull Racing then gave the keys to Tom Cruise and told him to do the same, which he followed up by doing a loop-the-loop in a helicopter.

This latest ‘stunt’ involved driver Neel Jani taking a tour of one of the most extraordinary roads in the world, and the highest. It was certainly a memorable drive for Jani, as one would imagine. He said,

“Of all the places I’ve driven around the world, Khardung La has got to be the most humbling. The Himalayas are as imposing as anything in the world and to become a part of history here will be a cherished memory.”

Take a look through the images and video below. Stunning stuff. What’s next do you think? ‘Red Bull F1 car takes on lunar exploration’?