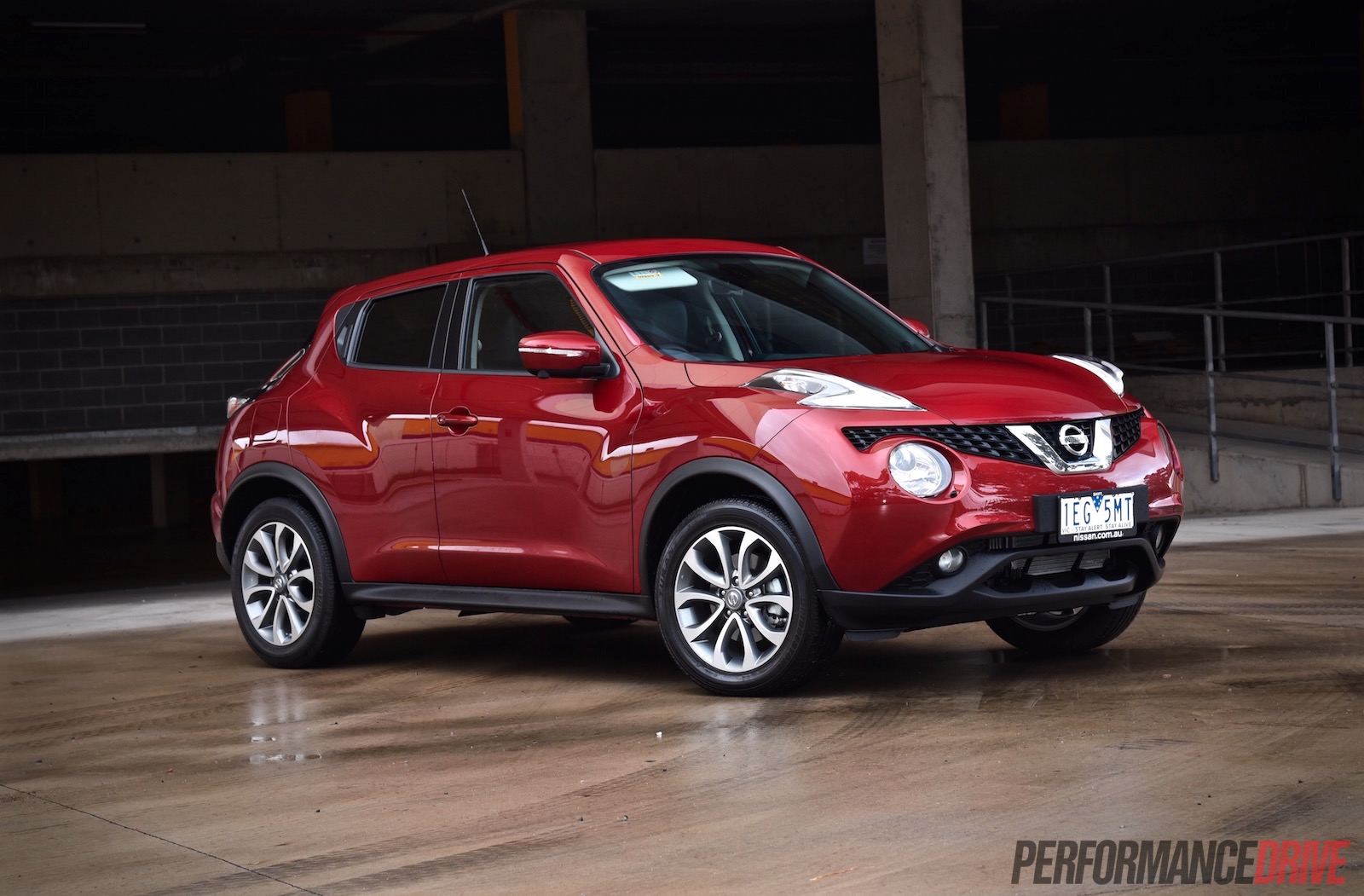 If you’re getting a bit tired of the same-old compact SUVs which seem to be borrowing designs from each other these days, the 2015 Nissan Juke could be just what you’re looking for. 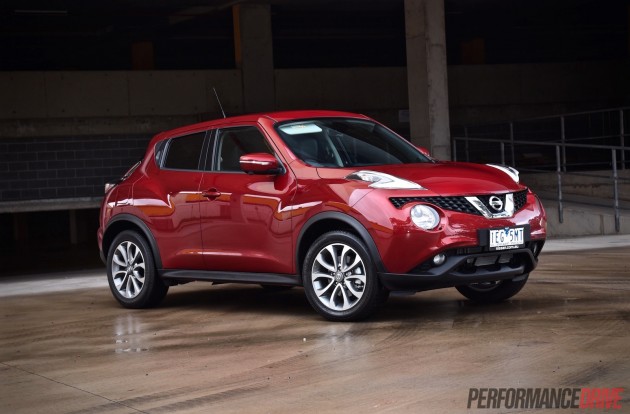 There are four different variants of the updated model on sale, spanning from the manual ST featuring an 85kW 1.2 turbo-petrol, a non-turbo auto 1.6 ST, and then auto and manual Ti-S models. The manual Ti-S is front-wheel drive, while the Ti-S auto, as tested here, is the only version of the four with on-demand selectable all-wheel drive. 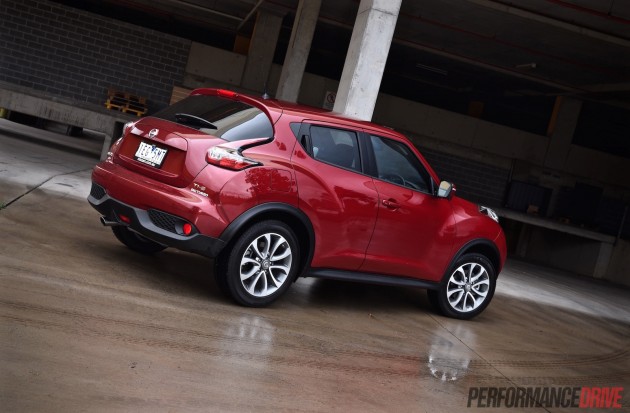 You have to admit, most compact SUVs on the market at the moment are starting to look very similar. Even the high-end brands are looking like the more mainstream offerings, and vice-versa. But with the Juke, it certainly stands out with an exclusive, albeit quirky, design theme.

All four variants look pretty much identical, with 17-inch alloy wheels as standard. For the 2015 model Nissan has fit its more modern ‘boomerang’ headlights to the front end (bi-xenon for the Ti-S), along with new side mirrors now with LED indicators, a revised rear bumper bar and matching taillights, and some new exterior colour options including a bright Bumblebee yellow and Magnetic red (as tested).

On-board connectivity and entertainment has been boosted for the Ti-S. In the dash is a NissanConnect interface with a 5.8-inch touch-screen LCD, offering sat-nav with Google search functionality for restaurants and other points of interest. The system offers a send-to-car function too, allowing users to research destinations at home and send info to the car. It all works well and seems easy to understand, with a good mix of menus and divided sections for the climate control.

Going for the Ti-S also gets you a very practical around-view monitor, providing a 360-degree bird’s-eye-like view thanks to cameras under the side mirrors, as well as digital radio reception.

Unfortunately for auto buyers, the Ti-S misses out on the extra boot space of the front-wheel drive counterparts. The 2WD versions receive 40 per cent added luggage space over the 2014 model, now rated at 354 litres. For this AWD version there is just 207 litres. This is quite small for an SUV. In fact, it’s smaller than some compact hatchbacks, which means you won’t be using the Juke to pick up your next flat-screen TV, or to take many youngsters with strollers to the park.

Cabin space and comfort is satisfactory. Headroom is decent in the front and becomes a bit tighter in the back seat. Shoulder space is quite limited in the back, and even in the front the narrow nature of the body is evident. If you’re a large individual the Juke probably won’t be your cup of tea.

Despite the petite proportions, the Juke interior has an exclusive design and decor. In fact, you aren’t likely to become bored by the cabin any time soon. The centre console, while missing out on an armrest and storage box, features two cup holders which are moulded into a big painted blob that melts its way down from the dash. It’s an interesting design but it seems as if Nissan could have used the space more efficiently by embedding a storage slot or two – there is just one very shallow dish in front of the gear shifter. 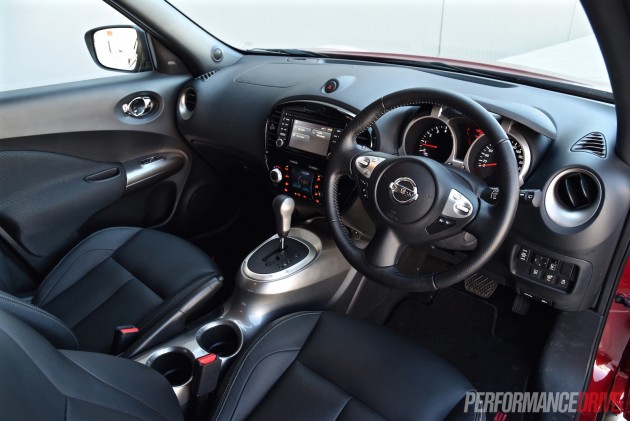 Being the top-spec model, the Ti-S comes with Nissan’s 1.6-litre turbocharged four-cylinder engine. It produces the same 140kW/240Nm output as the Pulsar SSS (with the same engine). This is a powerful little motor for a small SUV, and as such places the Juke in the market as one of the gutsiest packages in the class.

Off the mark the Juke Ti-S becomes very angry if you plant your right foot. It roars and screams its way up the rev range, producing more than credible acceleration along the way. This is especially the case if you select the ‘Sport’ drive mode; one of three different modes (Normal, Sport, Eco) that can be selected on the lower LCD panel. The screen doubles as the readout for the climate control, magically swapping buttons and background colours.

In either drive mode the CVT transmission is the least appealing aspect to the powertrain in our opinion. In Sport mode it holds revs right up to 4000rpm and stays there, even on gentle throttle application. And then when you have it in Eco mode it just hunts for the lowest revs possible. During our test the transmission had a tendency to delay in Sport mode, often holding the revs at 5000rpm-plus without providing the maximum torque and power despite being at full throttle – a very strange sensation. The Normal mode is the only option worth using.

Once the gearbox has it sorted and the engine is in its sweet spot, performance is mightily impressive. We timed 0-100km/h in 7.1 seconds, which makes it one of the quickest vehicles in the segment. Watching the in-built boost gauge is fun as well, however, we think a normal sports automatic (non-CVT) or a dual-clutch unit would produce even quicker acceleration and more enjoyable and useable performance.

On the handling side of things, the Juke Ti-S is very agile and responsive. Cornering ability will put some sporty/hot hatches to shame. It really darts around like a wasp, jumping from corner to corner. It’s fun, even around the city, zipping through tight streets and small roundabouts. And with the small exterior proportions it offers predictable placement and easy-to-park maneuverability. Ride comfort is obviously not a priority though; the taut and firm setting is likely to become too fidgety and firm for some.

Engaging the 4WD mode via the switch on the dash provides noticeably increased stability in wet conditions. With low profile tyres however, this isn’t trying to be an off-roader, but merely a softroader that can handle muddy roads and snow better than a hatch. We like that it’s switchable so you can conserve fuel when the 4WD grip isn’t needed. Speaking of which, we couldn’t hit the official average consumption of 6.5L/100km during our test. Instead, the vehicle returned around 8.9L/100km, in test conditions. In real-world conditions on a more long-term basis, you could probably expect mid-7s. 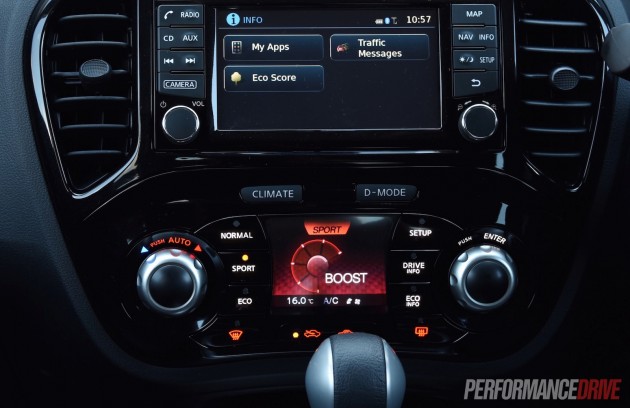 There’s no doubt the Juke is a quirky proposition in the overwhelmingly popular segment. Is that a good thing? If you want to stand out with something different, yes. As a bonus you also get genuinely sporty handling, an eager engine, and decent build quality and on-board technology. For those that want something familiar though, you might want to check out some of the – mostly more practical – competitors.