The Bentley Continental GT3 concept has been revealed at the 2012 Paris Motor Show. The GT3 turns the larger luxury cruiser into an angry racing weapon. 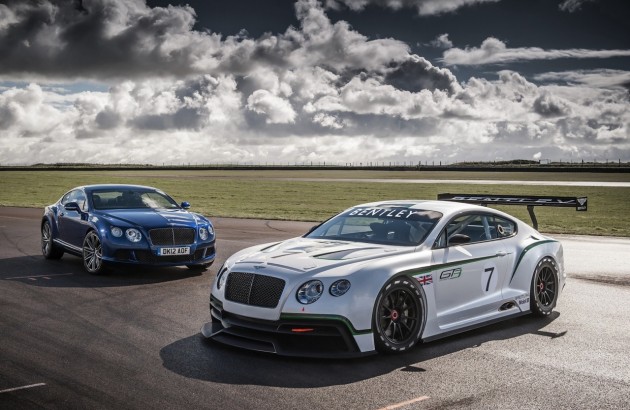 The British company has released little details about the racing concept, however, most of the mechanical specifications are likely to fall within the regulations of the FIA GT3 series. This means rear-wheel drive and around 373kW (500hp).

As you can see, Bentley has done an awesome job of developing the body of the race car. At the front there’s a super-low and aggressive front spoiler system that actually blends in very well with the original lines of the Continental road car, while at the back there’s a huge wing keeping things planted at high speeds. A cool side-exit exhaust arrangement finishes it off.

As for getting and racing, the company is expected to get involved in GT3 motorsport next year. Bentley Chairman Dr Wolfgang Schreiber said at the car’s unveiling,

“The Continental GT3 is set to show the world what the Continental GT is capable of in its most extreme form, and establishes a solid foundation for Bentley’s long-term motorsport plans.”

Click play on the video below for a bit of a preview.