You can get the 2020 Renault Megane RS Sport, Cup, Trophy, Trophy-R, and Trophy-R Record Edition. And some of these are available with either a manual or auto transmission. No other hot hatch on the market is available in such an extensive range. 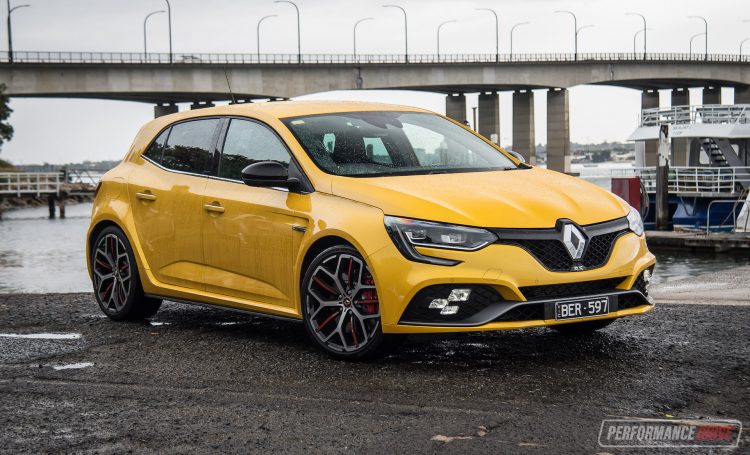 Here we’re checking out the flagship Trophy variant. We say flagship because the hardcore track-focused Trophy-R is more of a special edition (only 12 allocated for Australia, 500 globally), while just one example of the Trophy-R Record Edition went up for grabs locally (30 worldwide). All examples of the Trophy-R have been sold as well, which means it isn’t really on the market anymore.

Although it is a step down from those, the regular Trophy has five seats, a good stereo and comprehensive touch-screen and all of that, but it also comes with the Trophy-R’s tuned 1.8-litre turbo engine. In the Sport and Cup this engine produces 205kW and 390Nm. In all Trophy variants the figures are wound up to an impressive 221kW and 420Nm. You can get it with a six-speed manual or a six-speed dual-clutch ‘EDC’ auto, which is what we have here.

These outputs make it one of the most powerful cars in the class. Specifically looking at the front-wheel drive lineup, only the Honda Civic Type R tops it, with its 2.0-litre VTEC turbo developing 228kW. Although, it falls short on torque, peaking at 400Nm.

Prices for the auto Trophy start from $55,990, or you can save three grand and go for the manual. This places it at the upper end of the field in terms of price. Even the Civic Type R retails from less, at $51,990. Although, it is available in manual only. 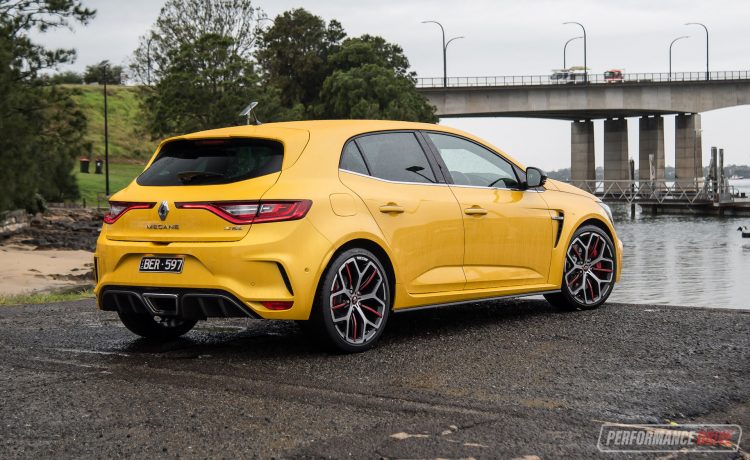 One of the key attractions to a hot hatch is practicality. Despite the go-fast bits and pieces and the fiery design and all of that attitude, the Megane RS Trophy can be used as a daily driver. It offers seating for five, reasonable space for most, cup holders front and back, a centre storage box and various little pockets and cavities for your things, as well as excellent headroom and legroom in the front and back for its size.

Renault’s R-Link touch-screen is presented upright, which is unusual for this segment. However, we’re not complaining as it is quite large, at 8.7 inches. The vertical orientation also means there is a familiar flow of pages and menus, like you’re reading a magazine or book. We’re not a fan of the menu functionality, though. Just to select radio from the home screen requires at least three selections; Multimedia>Radio>FM/DAB. Frankly, this can get distracting as you end up looking at the screen more than the road. 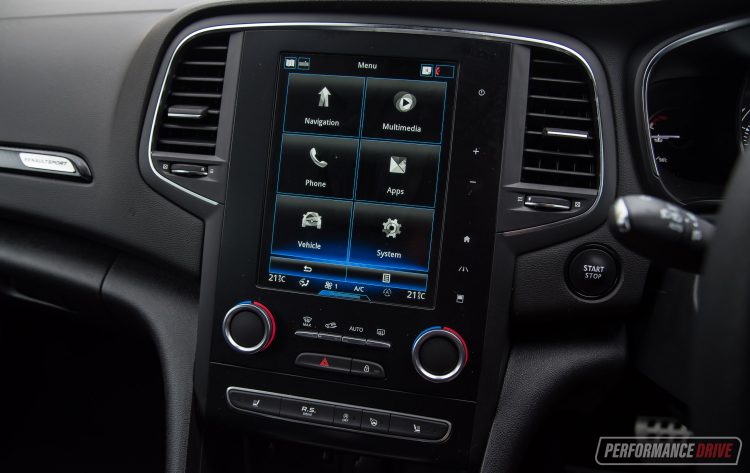 Fortunately, Renault does provide a solution. Behind the steering wheel is a chubby stalk that contains a volume wheel, media source toggling, and track/station skip buttons. It does take some getting used to but it’s a lot quicker than fiddling around with the screen. The volume spindle in particular is handy, as opposed to the annoying on-screen plus/minus control. You will be adjusting the volume often as tunes are pumped through an awesome nine-speaker Bose sound system. Android Auto and Apple CarPlay are supported as standard.

The Alcantara-wrapped bucket seats in the front offer plenty of adjustment and the steering column moves up and down and in and out. Along with aligned pedal placement, this is definitely a nice driving position. You can hunker right down low if you want to or raise the seat up for a more commanding view. There’s even seat heating in the front.

As you can see, the Trophy isn’t some hardcore track car that does without frill, convenience or comfort. 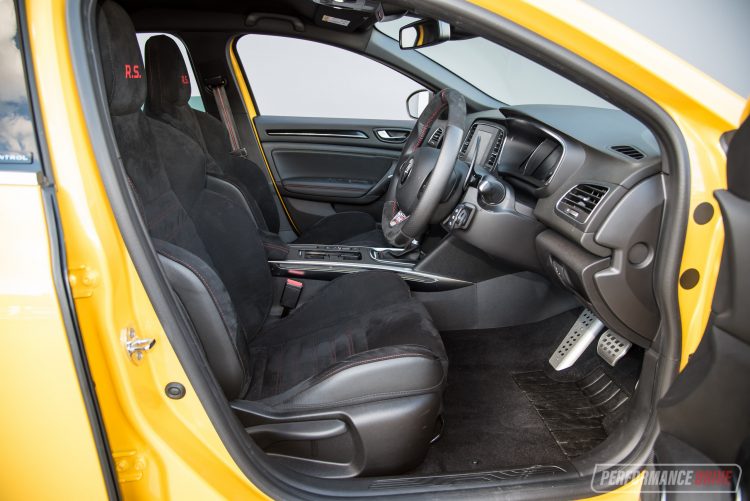 Rear seat space is pretty good for this class, and the bench is somewhat contoured to match the front seats. It’s also wrapped in the same soft Alcantara with red highlighting for contrast and raciness. Renault has provided climate vents in the back as well. These are sometimes omitted on small vehicles, so it’s great to see them here. Front passengers control the dual-zone system but at least on hot summer days the rear passengers don’t feel as relegated.

Boot volume is listed at 434 litres and expands to 1247L with the rear seats folded down. Compared with the key rivals, the Megane does well; Ford Focus ST (373L), Honda Civic Type R (414L), and Hyundai i30 N hatch (381L). You won’t find a spare wheel under the boot floor, which obviously helps to open up the space. Instead, there’s a pesky repair kit. But we guess flat tyres are pretty uncommon? 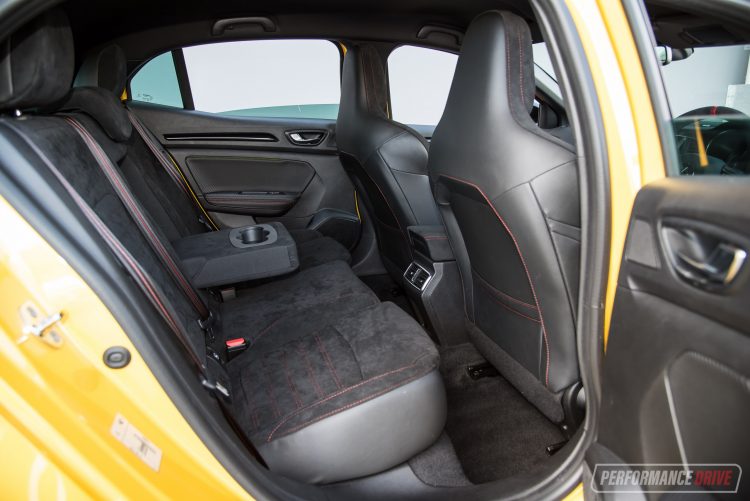 So, what’s the difference between this and the Cup – and the Sport for that matter? Well, the Trophy uses the same serious suspension setup as the Cup. The dampers are 25 per cent firmer than those on the RS Sport, and the springs are 30 per cent tighter. The stabiliser bars are also 10 per cent stiffer.

While the ride is undoubtedly very firm, we’d like to refrain from suggesting this is a criticism. After all, this is the Trophy. What it means is the handling is pin-sharp, and there’s essentially zero body roll interfering with the car’s response. In Race mode the suspension becomes race-car firm, and we think it’s really only suitable for the slickest of surfaces or racing circuits. And that’s fine by us, and perfect for avid RS fans who regularly hit the track. 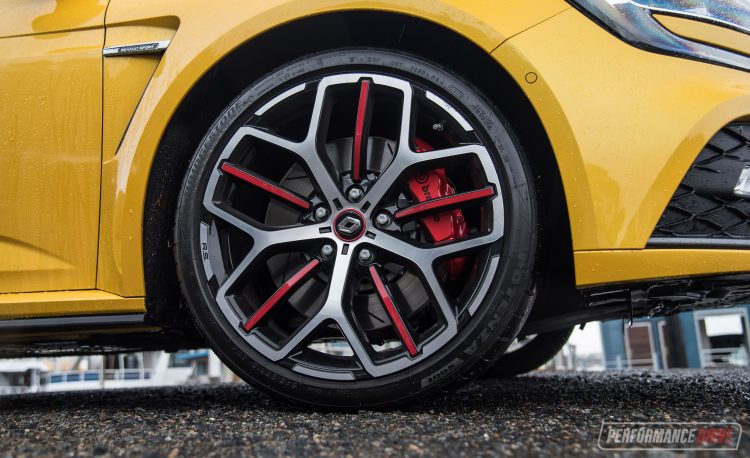 In this mode the Megane becomes a proper pocket rocket in the corners. It can dart and twist like a bee, and grip is outstanding thanks to the 245/35 Bridgestone S001 tyres. Also helping in this department is the Megane’s revolutionary four-wheel steering, or 4Control as Renault calls it. This is the only car in the class to offer such technology.

At low speeds the rear wheels rotate in the opposite direction to the front, assisting with pure agility and effectively tightening the turning radius. At higher speeds the rear wheels turn in the same direction as the front, making the car more stable and virtually extending the wheelbase. In principle, this is a very clever and innovative system.

In the real-world it can feel a little odd. At first, anyway. And usually only when you’re pushing quite fast, switching between long sweeping bends and into tighter turns. The car can feel overly fidgety, almost like it has a twitch. You do get used to it and kind of adapt your driving style to accommodate. But, at times, it’s almost like it needs a machine to drive it, without emotion or expectation. There are moments where you think or anticipate it is going to behave or react a certain way, but then it doesn’t. It just gets on with it. A good thing but not completely transparent. If that makes sense. 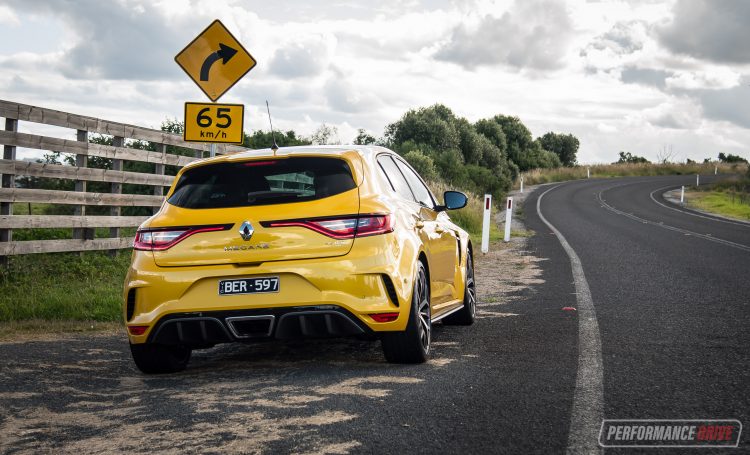 A Torsen mechanical limited-slip differential takes care of front-end traction, allowing you to apply more throttle closer from each apex as you go. There’s very little tug at the wheel, despite all of that power, and the electric power steering system conveys plenty of information directly from those tyres. But again, the 4Control system can sometimes interfere with your complete understanding on when the tyres are about to give way. However, this is only during serious demands.

As for that engine, it is a very forceful and powerful-feeling unit. With 420Nm available at 3200rpm, right in the middle of the rev range, it doesn’t quite have the versatility of the Civic Type R. It offers 400Nm, spread between 2500-4500rpm. Nonetheless, for a 1.8-litre unit, there isn’t anything more that you’d want or need.

Across the standard sprints we clocked a best 0-100km/h in just 5.60 seconds. This is the quickest time we’ve seen out of all of the key front-wheel drive rivals that we’ve tested. We also clocked the quarter mile in an impressive 14.01 seconds at 166.3km/h. These times aren’t all that different to what we last achieved in the Subaru WRX STI. And that’s AWD. 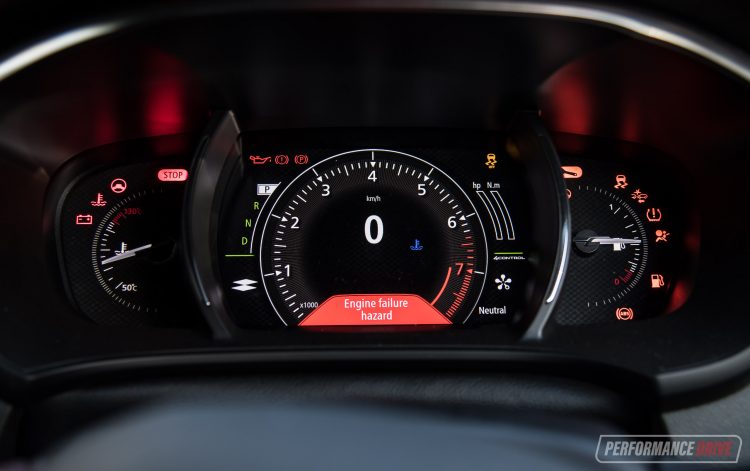 We did run into some trouble during initial testing with this particular test car, as you’ll see in the video below. After driving out to our usual private road, we set the camera up to capture the start-up. However, the car wouldn’t start. The starter motor engaged and turned the engine over, but the engine wouldn’t fire. A rather blunt and disheartening light on the dash said, “engine failure hazard’.

At the time this was a real shame as we honestly hadn’t even given the car the full beans. It was a busy week, with multiple cars on test – this was the first chance we had to drive it, aside from picking it up.

Fortunately, the roadside assistance experience was great (well, as good as it can be under the circumstances). Renault was quick to send out a truck and sort transport home. Although the overall ordeal took a nice four-hour chunk out of our day, Renault had the car fixed and booked us back in to complete the test in no time. The company said the issue was due to a faulty fuel pump.

In my personal experience as a mechanic (many moons ago), fuel pumps can sometimes fail prematurely if users regularly drive around with very low fuel levels. Often fuel pumps rely on the fuel as a form of lubrication. However, without having a full rundown on what caused the failure here it’s probably best not to suggest this as a potential cause. Especially as this is a press vehicle with under 10,000km on the clock 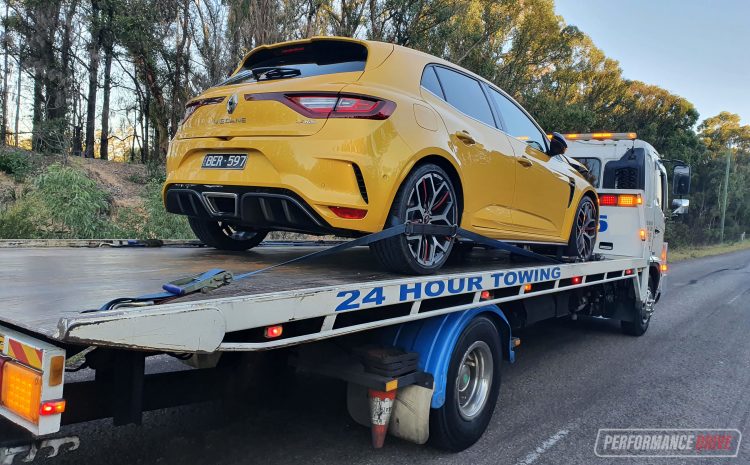 If you’re after a practical five-seat hatchback that would love to hit the track every month, we’d recommend you first check out the Honda Civic Type R and the Hyundai i30 N. In saying that, this new Megane RS Trophy throws a spanner in the works. It is definitely up there and worth looking into as well – at least take one for a good test drive before signing the dotted line on the others. The agility, partly thanks to the four-wheel steering, is astounding and the acceleration from the boosted 1.8 is the most impressive we’ve seen.

There are some niggles that would drive us a little bit crazy though, such as the ridiculously shallow cup holders and the annoying key card thing Renault persists with. But in terms of fit for purpose; a proper hot hatch that’s also large enough inside to support day-to-day duties, this is a versatile, thrilling and unique proposition. It also showcases a stunning design in our opinion. No other rival is as muscular yet chic and distinctively European.

CONS:
– Pin-sharp handling is almost too eager at times
– Shallow cup holders are useless
– At the pricey end of the segment
– Reliability issues with this test car

Getting down and dirty with the new Genesis GV80.