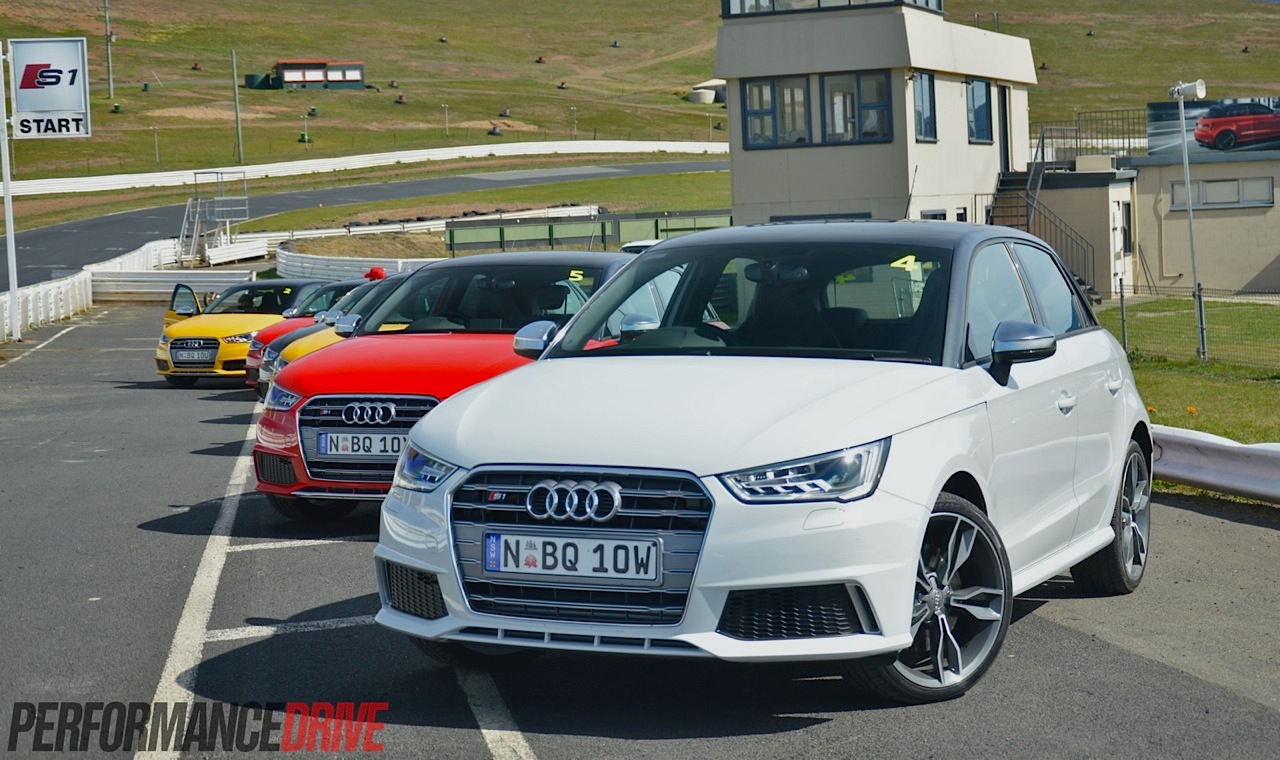 Welcome to the most powerful and technically most capable compact hatch to ever hit the Australian market. It’s called the Audi S1 Sportback quattro and it has been made to rekindle the spirit of the mechanically mental Audi S1 quattro Group B rally car of the 1980s. 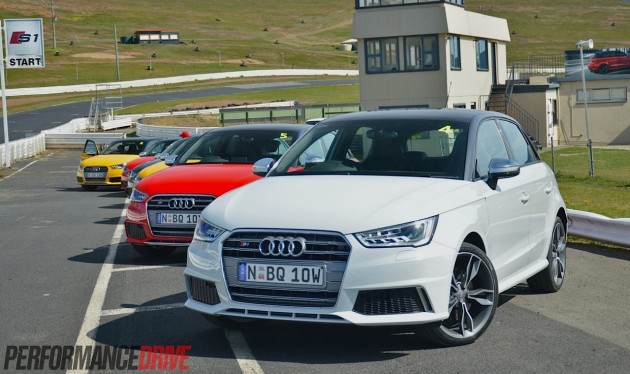 Okay, so it doesn’t exactly look like the legendary rally monster, with no sign of any extraordinary wings soaring out from the body, no chisel-jawed face, and certainly no perspex windows to speak of. Instead, the new S1 Sportback is based on the cute and somewhat muscly A1 Sport.

The body is slightly different and more aggressive compared with the regular A1, with special vents and spoilers at every corner. There’s also trademark silver side mirrors, quad-outlet exhausts, and a wider stance with 17-inch or optional 18-inch alloy wheels giving it plenty of prominence out on the road.

Even though it’s not the reincarnation that we all hoped for, with the lack of mega-sized wings and whatnot, this is a genuine S model. In fact, it’s the smallest S model and the least expensive to hit the local market. At $49,900, it’s just $10k north of the otherwise flagship A1 Sport 1.4. That’s pretty impressive considering all of the additional engineering that has gone into developing this meaty hatch, not to mention the higher specification and level of standard equipment.

Speaking of specification, behind that cute face sits a Volkswagen Group 2.0-litre TFSI turbo engine producing 170kW of power at 6000rpm, and 370Nm of torque from 1600rpm to 3000rpm. This cements it in as the most powerful model in its class. The relatively lightweight engine (148kg) requires up to 20psi of boost pressure to hit these figures.

From there, the grunt is sent exclusively through a six-speed manual transmission. We think it is very ‘un-Audi’ to offer only a manual transmission with the S1, particularly as this car is targeted at younger generation buyers – plenty of whom will only have an automatic driver’s licence. For old-school and more committed driving fans it’s a hugely welcome component. More on that below.

Audi’s quattro team have developed a bespoke adaptive sports lowered suspension system for the S1, which comes standard, as well as performance brakes, and a four-link independent rear suspension setup to cradle a rear differential that obviously isn’t there in the regular front-wheel drive A1 models. 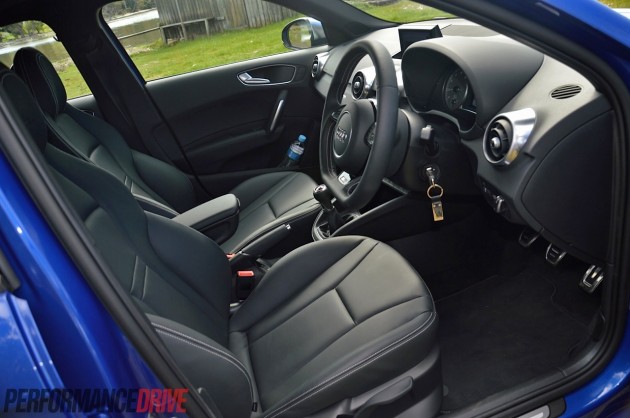 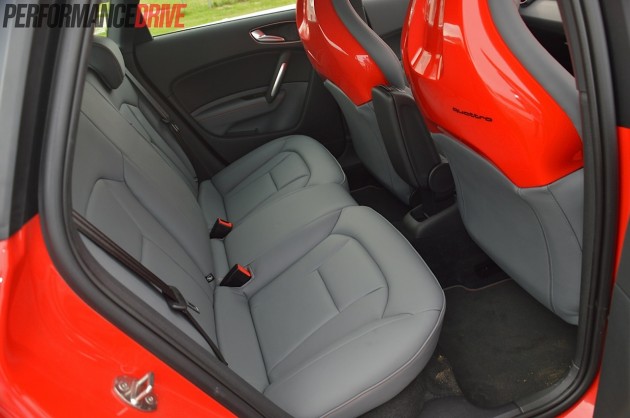 Unique amenities have also been administered to the cabin, with big chunky sports seats in the front doing their best – yet failing gracefully – not to swamp legroom for rear passengers. You can option for even bigger and chunkier seats that come with colour sections on the back. These do intrude on rear space but they are a must-have item for the keener Audi aficionados out there.

Audi vehicles usually come with a dauntingly extensive options list. Not here though. Audi has put together three package options to try and simplify things. The packages aren’t simply filled with items that should already be standard either; there’s some cool features that can help personalise your S1.

You can go for the quattro performance pack ($4990) which adds 18-inch alloy wheels, big chunky S sport bucket seats covered in Nappa leather, a Bose surround sound system, and Audi exclusive air vent sleeves in silver. There’s also a quattro exterior package ($3990) and an interior package ($2490), as well as some other more usual high-end luxury options to choose from.

If you don’t go for any of the options, don’t fret, the S1 is comprehensively equipped as is. You get an on-board MMI interface with sat-nav including 20GB of storage and two SDHC card slots, all of which pump tunes through a 10-speaker sub-woofer-enhanced stereo.

For the driver there are three driving modes with separate damper settings; efficiency, auto, and dynamic. These change the sensitivity of the steering, throttle response, and dampers to provide a distinct driving character. Selecting dynamic mode also opens the bi-modal exhaust actuators at the back. 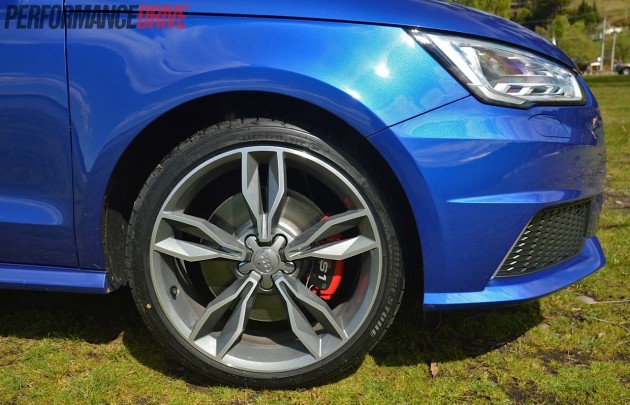 Enough of the chit-chat though, what’s this little beast like to drive? Is it worthy of wearing the Audi S badge?

Audi Australia chose the scenic yet sometimes forgotten state of Tasmania for the national launch, which also included track time at the exciting Baskerville race track just north of Hobart. If you’ve never been to Tasmania and you love driving we strongly recommend you take a trip down. There are heaps of great roads around, lots of beautiful scenery, and plenty to see and do.

On the road the Audi S1 Sportback feels firm and ready. The suspension is stiff, even in efficiency mode, reiterating its sports car credentials. It feels very nippy and energetic, and it can cruise in a relaxed manner on the highway.

That low-rpm torque figure means you can pull away from roundabouts and so on in third with ease. If you keep your boot in you’ll feel the full 170kW, by which stage you tend to double check the speedo.

It’s an easy little car to drive and you don’t need your international racing licence to balance the clutch and use the controls. In other words, it behaves much like the regular A1 Sportback only it gets up to speed much, much quicker. 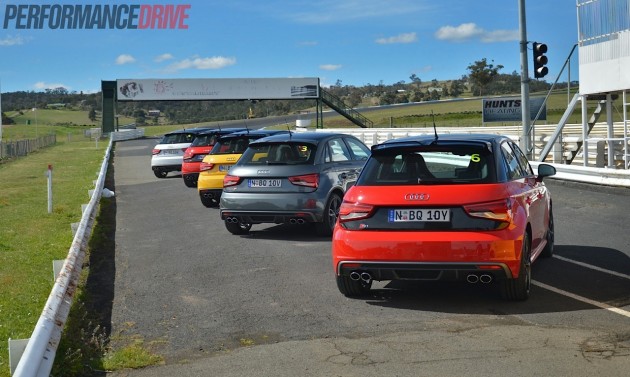 To get the most out of it it’s obviously best to take it to a track. On the circuit the S1 transforms from a friendly yet feisty hatch into a really enthusiastic super hatch.

Audi strictly told all media to leave the stability control switched on, so this was obviously the first thing we turned off once on the track – it’s like telling a kid not to push that red button. We also tried a couple of laps with the systems switched on and found no major difference. The car is well balanced enough that it takes vigorous, mostly unnatural moves to trigger intervention.

We love the way the regular A1 handles. It is perhaps the most lively mainstream model in Audi’s showroom. With the S1 Sportback being so small, and with all-wheel drive and an almost square footprint (like the original S1), it loves darting around and ripping away from corners.

Communication through the steering wheel is excellent. You can hit apexes every time and really get to know the car and understand its limits. It doesn’t feel like it has anything to hide either. If you lean on too hard it will gradually push into easy-to-control understeer.

Conversely, the suspension might be firm but it does allow some body movement and weight shifting to occur, which means you can chuck it around so to speak and provoke small bouts of oversteer. The powertrain is set up for sheer grip though, with a 60:40 front:rear torque split calibration.

Slotting home gear after gear reminds you of driving an old hot hatch. It’s brings you back to the fundamentals of what makes driving fun. It’s an enjoyable gearbox to flick through. The movement is thick and slick, and each ratio is perfectly matched to carry on and maintain thrilling acceleration with each upshift. Ratios are also nicely spaced to provide rapid low-end acceleration as well as a top speed of 250km/h.

We didn’t get a chance to do a proper 0-100km/h run using our usual equipment, however, we did video the sprint for you for you to interpret. Audi says 100km/h comes up in 5.9 seconds. We have no doubt in that. We also did a full hot lap of the circuit for you, but you will have to excuse our driving; we were only given a handful of laps and we hadn’t been on the particular track before.

As a very special treat, Audi Australia kindly gave us the opportunity to go for a quick ride-along (and we mean quick) in a fully prepared Audi S1 quattro Group-B-spec rally car. We are putting together a video of the demonstration and hot lap and will post it on the front page in a separate report as soon as possible. 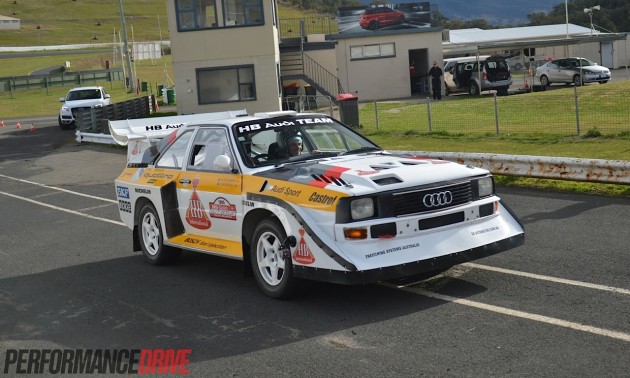 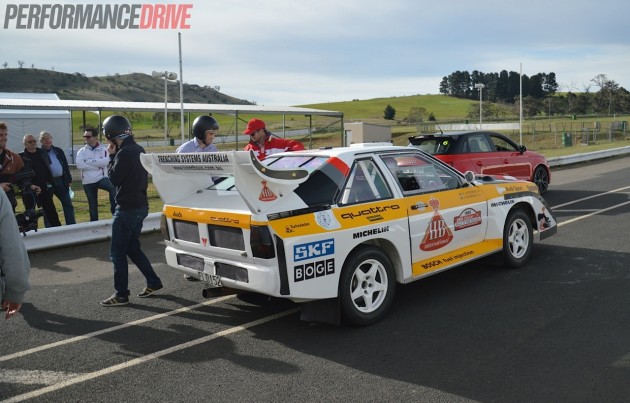 The new S1 Sportback could potentially be Audi’s best-selling S model. In Australia, 14 per cent of all brand sales are S models. And the trend is growing every year.

This featherweight and relatively inexpensive addition should do very well indeed. It’s a cracking compact hatch and easily the most competent and thoroughly engineered option on the market.