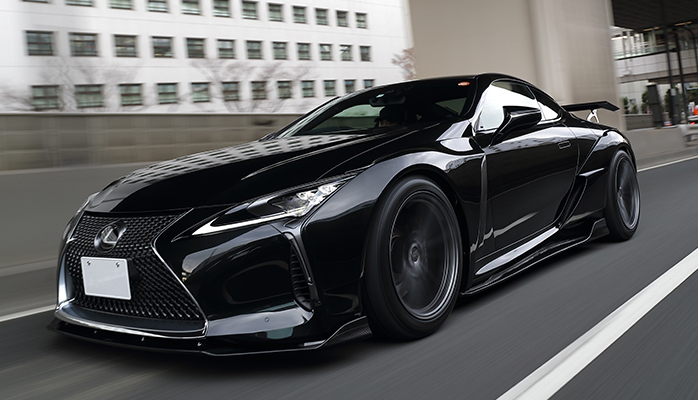 It’s about time a tuner came up with an upgrade package that actually enhanced the already gorgeous design of the Lexus LC 500. Check out what Artisan Spirit has just come up with.

Yep, a wide-body kit for the Lexus LC, called Black Label GT. And best of all, it doesn’t seem over-the-top. But instead accentuates the natural lines of the sharp-dressed coupe. The extra width is somewhat concealed by the seamless panel integration, almost making it look like it was designed like that from the factory – Lexus LC F inspiration?

At the front is a custom spoiler with side winglets, leading to pumped out front guards. From there you’ll notice the extra width via the chunky side skirts, which have to spear outward to meet up with the fat rear wheel arches and flexed haunches.

Around at the back you’ve got some custom rear guards to provide extra width, while along the rear bumper bar is a racy diffuser element and finned skirting. There’s also some new vertical side vents placed just behind the rear wheels, and a big wing mounted on A-frame struts.

Artisan Spirits can offer you the complete wide-body kit in fibreglass or carbon fibre, depending on how thick your wallet is. It’s then up to the buyer to get the bits painted to suit their car. Prices start from 1.2 million yen (about AU$15,100).

There’s no mention of any under-bonnet modifications. However, these show cars look like they deserve some kind of crazy twin-turbo package for the factory 5.0-litre V8. In standard form the V8 produces 351kW. About 450kW would be nice. What do you think?

Lexus has sent out a teaser of its all-new fully electric model, called the RZ 450e, giving us a glimpse...

It seems like the auto market has exploded with electric vehicles just in the last six months or so, particularly...