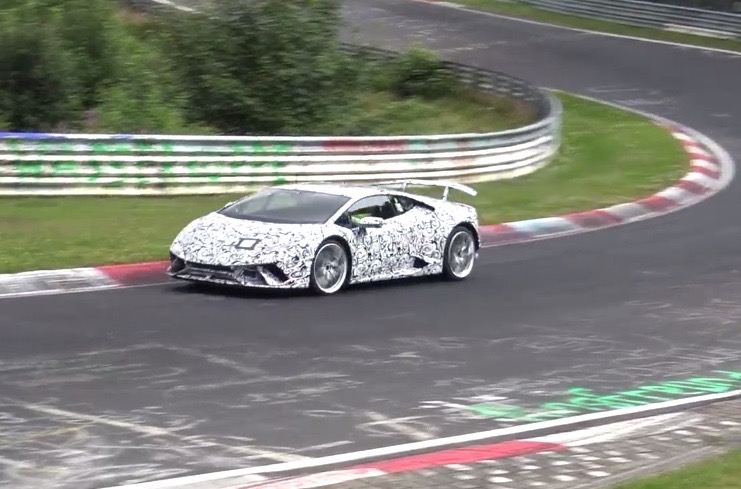 A prototype of the upcoming Lamborghini Huracan Superleggera has again been spotted by Nurburgring snappers, with speculation suggesting the baby bull may in fact be rear-wheel drive, not all-wheel drive.

This makes sense as the LP 580-2 Huracan is now a permanent fixture in the Huracan lineup, the concept having been introduced on the Gallardo predecessor as a special edition in the form of the 550-2 Balboni, which commanded a premium over the base AWD version.

The new Superleggera – name yet to be confirmed – is expected to jetison 100kg as part of its more focused package. As a reference point, the LP 580-2 weighs 1452kg (tare).

The weight difference between the all-wheel and rear-wheel drive versions is 33kg worth of transfer case and front differential, but there is no guarantee of this rumour. After all, the two Gallardo Superleggera predecessors retained their AWD setup, as per the ‘entry-level’ models.

The Huracan LP 610-4 has managed a 7:28 Nurburgring time, that the Superleggera would be hoping to comfortably eclipse. Its bigger brother, the Aventador SV (SuperVeloce) has managed to dip under the seven-minute mark, at 6.59:73, making it the fastest bull around the ‘Ring.

Could the Huracan Superleggera manage to get near this? We will probably have to wait for the 2017 Geneva Motor Show next March before we find out.

The lightest and rawest V10 Lamborghini ever made was the 999kg Sesto Elemento, of which only six were produced.