Another very special edition Abarth has been announced, called the Abarth 695 Tribute Maserati, based on the Fiat 500C drop-top. It comes with a range of luxurious highlights. 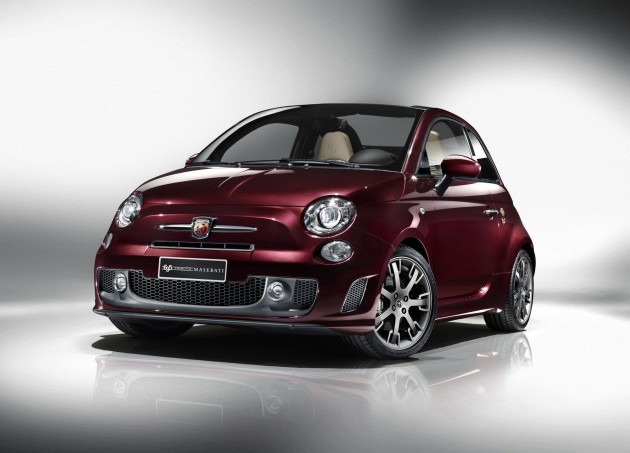 Like the Abarth 695 Tribute Ferrari, the Maserati version will be used to connect the more premium buyers that are usually attracted to Fiat’s more well known brands (Ferrari, Alfa Romeo), to the sporty hot hatch subsidiary.

Just 399 Abarth 695 Tribute Maserati examples will be made. Each featuring a number of components and features focused around style and prestige, including some design cues in tune with Maserati.

Underneath, there’s a Record Monzo exhaust system with hexagonal tips at the back taking inspiration from Maserati vehicles. The exhaust also features a dual mode for variable back-pressure and changes to the sound.

The engine is a 1.4-litre Turbo T-Jet four-cylinder unit producing 132kW. It sends power to the front wheels via a sequential-shift automatic Abarth Competizione transmission, with paddle shifters behind the steering wheel.

Matching exquisite touches include a Poltrona Frau leather interior with printed ‘695’ logos on the seats, a sports leather-wrapped steering wheel, and aluminium pedals and sill plates.

In case that isn’t enough, Abarth can also throw in a special Tramontano Tribute to Abarth Travel Pack, including two travel bags.

The special model is apparently under consideration for the Australian market, however, it first needs to be produced in right-hand drive before any decisions can be made.