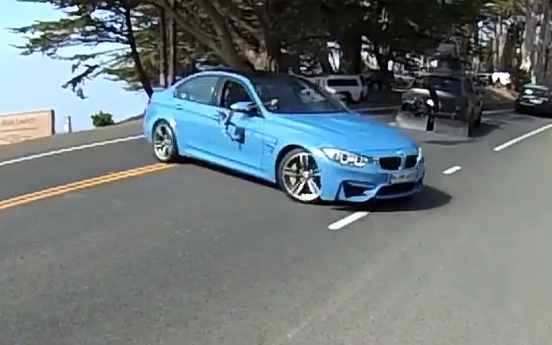 BMW has been spotted photographing what appears to be a fully undisguised version of the upcoming 2014 BMW M3 sedan. The car is hard to miss, featuring a new bright sky blue colour scheme.

This is the first time the new model has been captured without any noticeable disguise or camouflage. And in this ‘Yas Marina Blue’ colour, it almost looks like a modified example with streak of aftermarket tuning in its blood.

Telltale signs that this is the M3 include the flared wheel arches, the bonnet bulge, and side ‘gill’ vents, and the quad-outlet exhausts at the back. There’s also a distinct bodykit with sides skirts, a neat rear lip spoiler, and a carbon fibre roof.

No further specifications have been revealed. The last BMW has said is that it will come with a turbocharged inline six engine producing at least 316kW and 500Nm. Its power-to-weight ratio will be significantly improved over the current version thanks to an overall weight of just under 1500kg.

Click play below to take a look. The video was recorded via a helmet camera of a passerby, then appearing on Bimmerpost.

The car will debut at the North American International Auto Show in Detroit in January.