A very rare and original Mercedes-Benz 300SL Gullwing has been involved in a high speed crash in Pleidelsheim, Germany. The classic was reportedly being driven by a mechanic at the time, during a routine test drive. 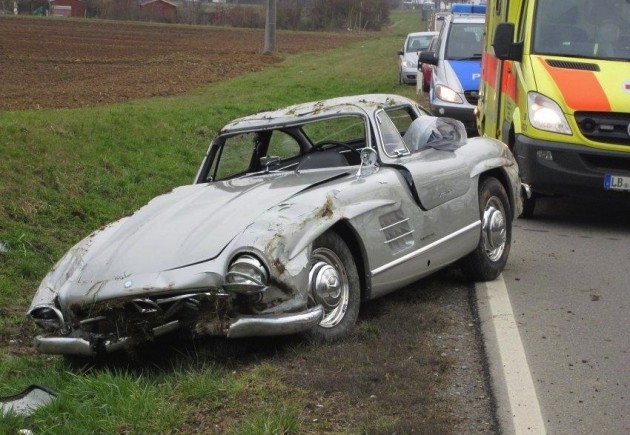 It’s never a pretty sight seeing a beautiful car all smashed up, and in this case, it’s an iconic Mercedes-Benz legend. Fortunately, the two passengers on board did escape without serious injury.

According to reports, the SL was being serviced at a garage called Mechatronics just before the accident. A 26-year-old male mechanic was apperantly in charge of the job, and the subsequent test drive. A 19-year-old apprentice was also in the car for the test drive.

It’s understood the driver lost control during high speed, which led the car off the road, digging into the grass. It then rolled, as you can see, causing significant damage to the nose and some buckling of the roof.

The poor SL is a write off, and is believed to come with a 650,000-euro (approximately $800,000) repair bill, which is more than the price of a brand new Mercedes-Benz SLS AMG ‘gullwing’.